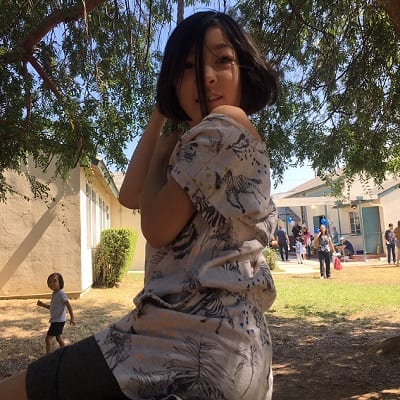 In March of 2014, just after my son was born, my daughter Eka and I started traveling to as many parks around the San Gabriel Valley as we could. Eka was 4 at the time and very attached to my wife. Our almost-daily trips began as a way to distract her from no longer being the center of her mother’s attention, but soon became a vehicle for my daughter and I to become closer and explore Southern California together. The Parks Project was born.

Traveling to different parks became a ritual we shared, and I always asked my daughter which ones she liked best and why. By the end of September 2014, we had visited close to 50 parks. We started in the western San Gabriel Valley and tried to keep our destinations within about a 20-minute drive because we usually started after I got home from work around 6 p.m. But we also started practicing this ritual wherever we traveled. Over the last four years, we have visited parks in Laguna Beach, San Diego, Palm Springs and Ojai.

My son Skye is now 4 (and Eka is 9) and he has been joining our park excursions over the last two years.  We have not been to every park in L.A. County, but we have been to around 80 of them, and we continue these trips a few nights a week, weather permitting. Here are some that are closest to our hearts.

Some parks boast large playgrounds and special features such as a merry-go-round. Others are quaint but may have a lot of trees a hillside view like La Loma Park or unique play equipment such as Vincent Lugo Park. Most are free, but some charge for parking on weekends.

Before I start with more specifics, I want to mention Elysian Park, Grand Park and Griffith Park. These three are among the most iconic in L.A. and need no introduction to most locals. Hiking trails at Elysian and Griffith are among the best in the city. 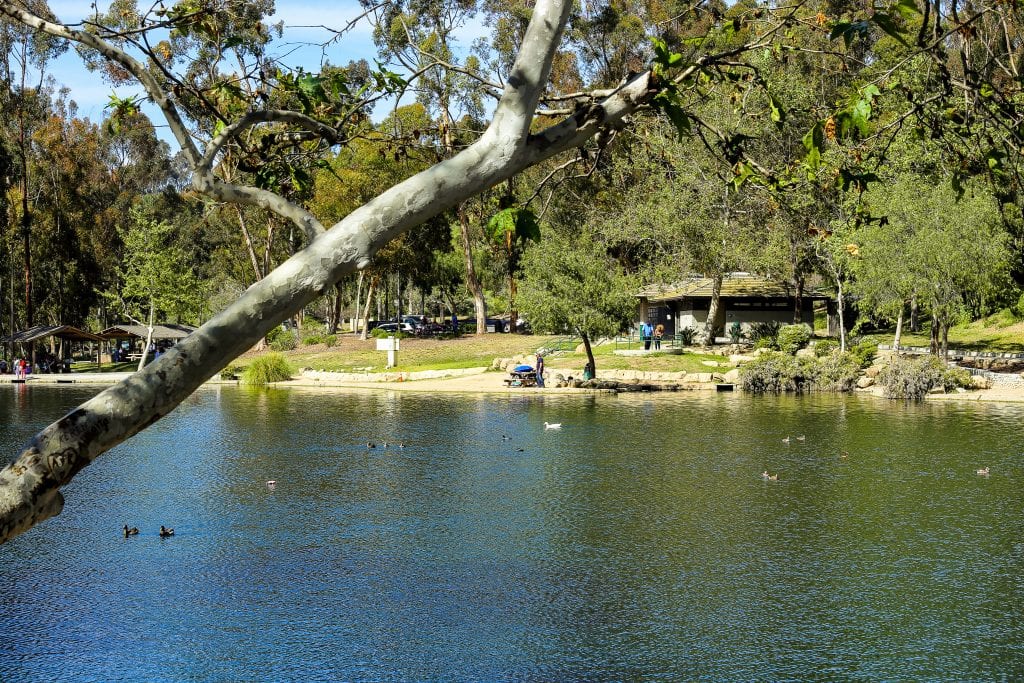 Shane’s Inspiration (4730 Crystal Springs Dr., L.A.), the two-acre universally accessible playground at Griffith Park, was the first of its kind on the West Coast, and has inspired others around California and the world. The splash pad at Grand Park is ideal for the sweltering Southern California summers. These parks are already widely known, while most of the others in this roundup are a little more off the beaten path.

Aidan’s Place (1350 S. Sepulveda Blvd., Westwood) was the first universally accessible playground on the Westside. Inspired by Shane’s Inspiration, Nicole and Charlie Gaffney decided to build their own version. They named the park after their son Aidan, who was born with a rare muscular disorder that left him dependent on a ventilator and wheelchair. The park features a completely accessible sandpit, splash pad and cockpit with walkways wide enough for wheelchairs. These features have made Aidan’s Place extremely popular.

Clover Park (2600 Ocean Park Blvd., Santa Monica) covers almost 18 acres south of the Santa Monica Airport. One of the biggest parks on the Westside, it boasts two playgrounds, a baseball field, two softball fields, two soccer fields, two tennis courts and a sand volleyball court. You can also sit on the southern edge of the park and watch the planes take off and land at Santa Monica Airport. The ocean breeze is never far away.

Wilson Park (2200 Crenshaw Blvd., Torrance) is a 44-acre park whose creators wanted to make it the Central Park of that fair city. Situated on the site of a former United States Naval annex, it was converted into a park in the mid-1970s and now features more state-of the-art sports facilities than just about anywhere. Besides basketball courts, four softball diamonds, a volleyball court, tennis courts and horseshoe courts, there’s a roller hockey rink, an accessible treehouse, an amphitheater, a pond, a jogging path and – on Tuesdays and Saturdays – the Torrance Farmers Market.

El Dorado Park (7550 E. Spring St., Long Beach) is a massive park with five large sections and seven lakes (if you count the one on the golf course). The three sections on the eastern side of the park are sandwiched between the San Gabriel Riverbed and the 605 freeway. The huge park is a great place for a picnic and bicycle riding, and there’s even a nature California of the park center where you can hike through uncut vegetation. I came here in the 1980s with my grandfather and now take my kids here whenever I’m in Long Beach.

The 60-acre Azusa River Wilderness Park (100 Old San Gabriel Canyon Rd., Azusa) is not yet completed, but the hiking trails and lookout vista are open. Located in a meadow just below the San Gabriel Mountains, this park is near the headwaters of the San Gabriel River and is considered a hot spot for bird watching. The Watershed Conservation Authority is located on the premises and is planning an outdoor classroom facility offering educational programming spotlighting the river ecology. The mountain scenery alone is worth the trip.

Heritage Park (18600 Bloomfield Ave., Cerritos) is a 15-acre park that features a unique play island celebrating American history. The island in the middle of the park features a fantasy pirate ship, colonial buildings and other structures centered around the era of the American Revolution. Within the various buildings are hidden slides, walls to climb and a whole slew of surprises. There are also ducks, geese and turtles around the edges. Basketball courts, a few baseball fields and a smaller playground are located beyond the island.

Vincent Lugo Park (300 West Wells St., San Gabriel) features 14 cement “friendly sea creature” sculptures. Created by artist Benjamin Dominguez in 1965, these popular sculptures are functional folk art and are renowned around the San Gabriel Valley. They have made the park so popular that the Nickelodeon show “Yo Gabba Gabba” filmed part of an episode there a decade back. Lending the park the nickname “Monster Park,” Dominguez’s sculptures are widely revered, and more can be found at Legg Lake near Whittier Narrows.

Kenneth Hahn State Recreation Area (4100 S. La Cienega Blvd., L.A.) might be the best place in Southern California to get a photo of the Downtown L.A. skyline in front of the San Gabriel Mountains. Known as one of the largest inner-city parks in L.A., it offers great hiking trails and views of the city in all directions. Located between La Brea Avenue and La Cienega Boulevard between Stocker Street and Slauson Avenue, Kenneth Hahn is a great midway point between Leimert Park and Culver City, and is on the way to the airport if you drive down La Brea or La Cienega. At more than 400 acres, the park offers fun for everybody.

Lacy Park (1485 Virginia Rd., San Marino) is nestled deep in the wooded landscape of the San Rafael Hills, just south of the Huntington Library. The space is more than 30 acres and well-loved for outdoor concerts, civic events and two extensive walking loops. The meticulously kept rose garden and ample green space is filled with a large inventory of trees. The pervasive green is a welcome respite from the never-ending concrete world we live in. Admission is free Monday through Friday, but the city charges non-residents a $4 fee on weekends.

La Loma Park (1950 Fulton Ave., Monterey Park) is small, but the cozy hillside view and wooded shade make it a jewel. The baseball field on the upper portion of the park was featured in Los Angeles Times reporter Jesse Katz’s memoir “The Opposite Field.” The serenity of La Loma Park is so enchanting that we have visited here more than almost anywhere else because, even on the hottest days, there’s plenty of shade and a nice cool breeze. The Armenian Genocide Memorial is visible southwest across the 60 freeway.

Story Park (210 N. Chapel Ave., Alhambra) is a small park close to where Alhambra meets San Gabriel, not too far from the San Gabriel Mission. Though Alhambra has bigger and more impressive parks, such as Almansor Park, Alhambra Park and Granada Park, the wooded confines of Story Park are cozy and charming. Just west of the Alhambra Wash, the sloped hillside on the park’s western edge is a clue that it was built originally as a flood control measure. Besides the playground, there are tennis courts and an indoor recreation center. Sometimes, we come here and bring dinner because Story Park’s many trees are the perfect covering for an outdoor family dinner.

Most of our favorite parks to visit are in the San Gabriel Valley because it is where we live, but there are exceptional parks all over L.A. County. And because of our adventures visiting them, my children have started to love exploring the city as much as I do.

Other families we know have exploration rituals of their own. One L.A. mom, Megan Panatier, is on a mission to visit every library in the city of L.A. with her young daughter. There are hundreds of other similar adventures awaiting you and your family. The possibilities are endless. Whether it’s parks, libraries, museums or something else, I highly recommend pursuing your own chosen mission, because it’s been deeply fulfilling for my family.