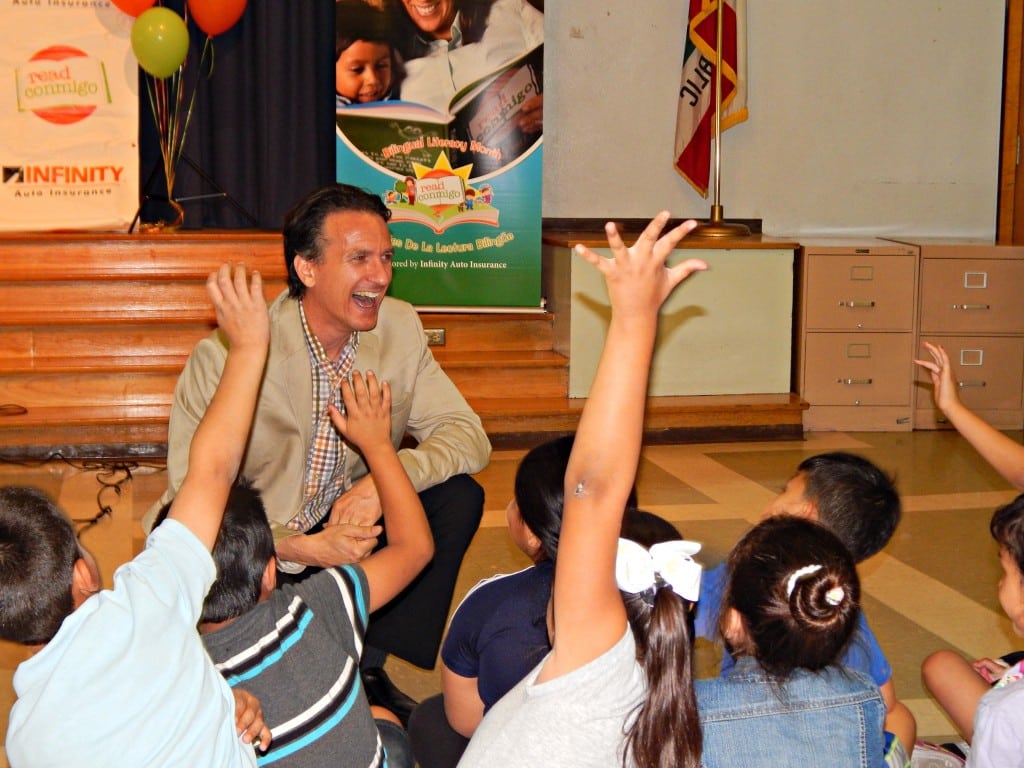 Antonio Sacre is an L.A.-based storyteller and father of two who loves sharing stories with kids.

Once upon a time, when my little girl was 5, our family took a trip to Paris. While my husband was out handling the business part of our business vacation, Lauren and I went to visit the Louvre.

It was a November weekday and the museum was wonderfully uncrowded – except for a large tour group from Japan blocking our view of the Mona Lisa. Determined that we would gaze on da Vinci’s masterpiece unhindered, I kept Lauren occupied by telling the story of “The Three Little Pigs” until the group moved on. Lauren, now 22, likes to tell the story of the time I told her a fairy tale in front of the world’s most famous painting.

There are many ways to use storytelling, and I’ve just given you examples of two of Antonio Sacre’s favorites – as a child-management tool, and to knit families together. But Sacre, storyteller-in-residence at the UCLA Lab School and the father of a 2-year-old daughter and 4-year-old son, says that stories told aloud activate kids’ brains in many ways.

Children listening to a story are following the action, wondering about what will come next and making connections between the story and their own world. And they’re paying close attention to the spoken word, which is how we all learn to speak.

Sacre also thinks that you – yes, you – should tell stories to your children. Here’s how:

Don’t be afraid. Sacre reminds parents that anyone can tell a story, and that you already do it every day. You tell friends or colleagues at work about funny things your kids do, and at night you talk with your spouse about how your day went. These are stories. “We exist in story,” says Sacre. “It’s not a fine art, it’s a folk art.” 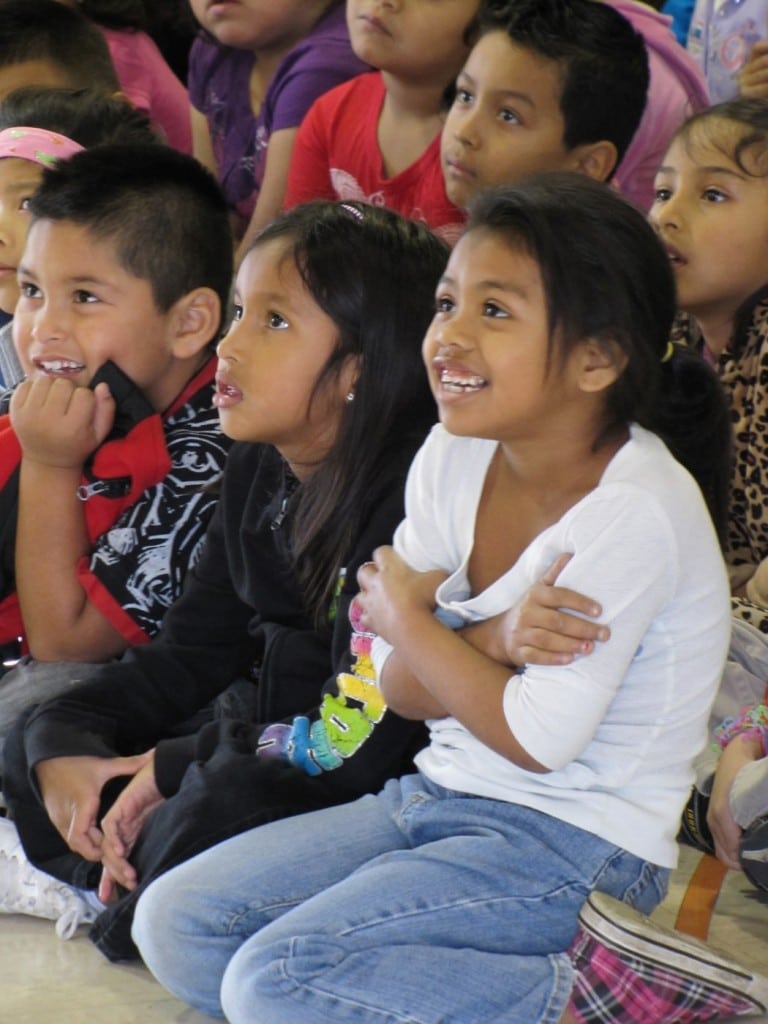 Start with family and friends. “Just tell your kids about the people that you know and love and the places that you know and love,” says Sacre, whose Cuban-Irish upbringing is featured in many of his tales. “You’re half-way to a story when you have characters and a place.” Don’t think your kids will be interested in your family history? You might be surprised! “We have to get over ourselves,” Sacre says. “It is amazing what we have experienced.”

Get cultural. If your well of family stories runs dry, go to folk tales from your culture – whether that is Ireland, Mexico or the American West. If you don’t have one, adopt one. “Claim a culture,” urges Sacre, and ask your local children’s librarian to connect you with some folk tales. Two books Sacre says most professional storytellers have on their bookshelves are “Favorite Folktales From Around the World,” by Jane Yolen, and “Ready-to-Tell Tales: Sure-Fire Stories From America’s Favorite Storytellers,” edited by David Holt and Bill Mooney. Read, but don’t memorize. Instead, grab what Sacre calls “the bones” of a story – characters, place, conflict and resolution. Learn those points and improvise around them, or tell a fairy tale you’re already familiar with.

Use your voice and your hands. In a tale about his uncle diving off the 10-meter board at a neighborhood pool, Sacre uses swooping hand gestures and an “aaaaaaahhhhhhh” sound effect to describe his uncle’s descent and splash into the water. He also creates different voices for different characters. Consider using a high-pitched voice for one character and a low pitch for another, or mimic accents of people you grew up with, actors or favorite cartoon characters. “When in doubt, steal,” urges Sacre.

Repeat, repeat, repeat. Repetition helps engage kids in the story, and is good for building vocabulary. “A 2-year-old needs to hear that vocabulary word 50 times before she can use it,” says Sacre. His son hadn’t heard the expression “skinned his knee” until Sacre used it repeatedly in a story about his brother falling down on the playground. Now it is part of his son’s growing word palette.

Change it up. You don’t need to tell a story the same way every time. In fact, you probably shouldn’t. Storytelling isn’t like giving a speech or acting in a play, where you’re reciting words you’ve memorized. “It’s a conversation that’s a one-sided conversation,” Sacre says, reminding storytellers not to get bogged down in details. Be aware of your audience and how they are reacting. Are they interested? Are they paying attention?

Want to see how the pros do it? You’ve got plenty of options.

Sacre, who has performed at the Library of Congress, the Kennedy Center and the National Storytelling Festival, has free appearances scheduled at 4 p.m. July 30 at the Calabasas Library (200 Civic Center Way), and Aug. 3 in MacArthur Park (2230 W. 6th St., L.A.; with children’s singer José-Luis Orozco). And you can find out about storytellers and storytelling festivals and workshops locally and across the country through the National Storytelling Network (www.storynet.org).

Another way to get a peek at Sacre’s tales is to check out his books. “The Barking Mouse,” “La Noche Buena” and “A Mango In the Hand” are all children’s picture books based on Sacre’s stories, all employing an engaging mixture of English and Spanish. His latest book, “My Name Is Cool: Stories From a Cuban-Irish-American Storyteller,” is a different animal entirely. Rather than a read-aloud children’s book, it’s more like one of Sacre’s storytelling performances in book form. 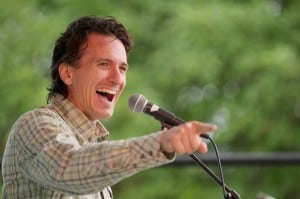 The book contains 18 stories, including tales from Sacre’s own childhood, his retelling (with a first-person wraparound that places them in context in his own life) of various folk tales, and even stories from his more recent years as an actor, writer, storyteller and dad. One of his tales is about working with seniors at Venice High School, a much tougher audience than your kids are likely to be.

Running through all Sacre’s stories is what he considers one of the most important parts of storytelling: family. It’s a vibe that gives even his retellings of traditional folk tales a deeply personal feel. He jokes that while he has built his career around his family’s stories, he’s considered the clan’s 10th best storyteller, “and that’s an honor.” Sacre never met his grandfather, but his father told so many stories that Sacre says he can picture him, connecting him to a man who died before he was born. “It becomes part of the family fabric,” he explains.

And while he is happy to tell tales to coax his children off the playground or quiet them when stuck in rush hour traffic, Sacre says that building family connections is the most important reason to tell stories to your children – especially in a world where we’re all more inclined to text than to talk. “There’s really a hunger for that kind of connection,” he says.