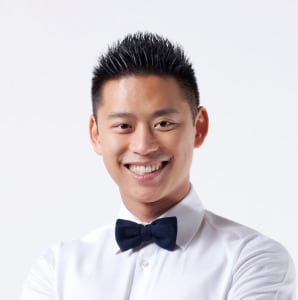 Animator, entrepreneur and founder of UP Studios, Trevor Lai.

I had the pleasure of sitting down with author, illustrator and children’s media entrepreneur Trevor Lai while he was in Los Angeles speaking at the World Animation/VFX Festival. We chatted about his Shanghai-based company, UP Studios, his dedication to quality children’s entertainment and his natural business acumen, which blossomed early.

JK: You launched a couple of successful companies when you were just in your teens. Where does that entrepreneurial spirit come from and what inspired you to start at such an early age?

TL: At 12, I asked my aunt to buy me a Small Business Opportunities magazine, so I’ve had the entrepreneur spirit since a young age. At the time I was an avid collector of cards and comics and was trying to think of a business related to the field. I always wanted to work in a job I loved, so the idea that I could create the perfect job was very appealing. It took me until I was 17 before I had my first company officially, so in my opinion it still took awhile. I think it would have been cooler to have my first startup at 12! But things have turned out well despite my late start.

Tell us about UP Studios, its mission and what your team has been working on.

UP Studios creates world-class entertainment for kids and families. Our mission is to combine unique storytelling, design and characters with media platforms and technology that can best engage our audiences. To this end, UP Studios is currently developing three animated series (including Super BOOMi and Piggy in Love) and launched the world’s first video and CG animation app, BOOMiGram, in a groundbreaking tour with Apple across China. In addition, our team has also produced mobile chat emoticons based on our characters, achieving over 45 million downloads to date.

What can we expect to see from UP Studios in the near future here in the U.S? 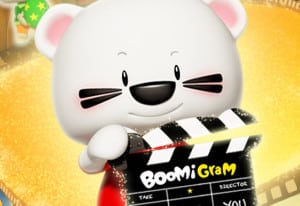 We’re launching a brand-new version of BOOMiGram, the world’s first 3D cartoon video/photo app we created featuring UP Studios’ original characters, like Super BOOMi, Bibop and Piggy in Love. We’ve also developed a full treatment and animated trailer for the Super BOOMi television series, which we plan to start presenting to broadcasters very soon. In addition to these, we have a couple more series that we are developing for international release, so hopefully you will see a lot of fun projects from UP Studios!

All your characters, Boomi, Bibop, Yao Yao, Tomo, etc. are 100% lovable and adorable. What goes into creating and developing these little guys?

Thank you! The first common ingredient between such a diverse group of characters is that they started with a spark of an idea to touch people’s hearts. For example, BOOMi came to me because I wanted to create a bear that is like a superhero but also super adorable. With Piggy, the idea was to make people fall in love with him, because his story is all about the journey to prove that true love exists. So, when I create characters and stories, I always try to infuse them with heart in a way that will reflect the audience’s emotions and dreams.

You inspire children to work hard and follow their passions, whatever they may be. Who inspired you as a child?

My parents were a big support, and my artistic inspirations ranged from Da Vinci to comic book artists. I also really love movies, which are the most visual form of world building and storytelling; I think the seeds of being a director were planted by the films I loved growing up. Robert Munsch is a children’s book author whose work I credit with helping me fall in love with stories when I was 4 years old, which is when I started drawing and creating my own stories. I’m working on a piece of art right now to thank Mr. Munsch, as I think he would be happy to see how his books helped inspire someone to eventually become an animation director! 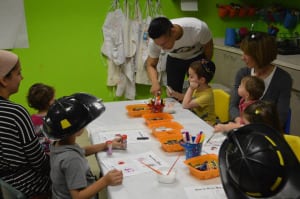 You recently spent time teaching children the fundamentals of animation at the Zimmer Museum. What advice would you give to a child who loves to draw?

Spend time really observing the objects and lighting around you, looking at all the details that you might normally overlook. By paying attention to these details, you’ll be able to draw things with more believability.

And most of all…Keep drawing!

What is the best part of your job?

Watching kids and families enjoy my characters and stories, seeing the hundreds of thousands of BOOMiGram photos and videos that are created and shared in over 90 countries. Basically, the idea of creating things that positively inspire and sometimes shape the imaginations of kids and kids-at-heart, makes me feel like the luckiest guy in the world to be getting UP EVERY DAY (our company motto).

To learn more about Trevor Lai and his company, UP Studios, visit www.upstudios.cn.