When strawberries come into season in the spring, at my house we start out by just bingeing on them plain – or with maybe a touch of whipped cream. Eventually, we get around to some shortcake.

Valerie Gordon of Valerie Confections – with locations in L.A., Echo Park and at Grand Central Market downtown – offers a recipe for another strawberry classic, strawberry-rhubarb pie.

“Kids love pies,” says the mom of two and author of the cookbook “Sweet,” adding that they are a sweet way to offer kids a healthy helping of fruit. “I prefer giving them pie to something with a cup of frosting on it.” A pie doesn’t have to be a big project, either. Gordon says that a pre-made crust from Trader Joe’s or Whole Foods can be a true timesaver. “If you have the fruit, and you get a pre-made crust, it’s probably 15 minutes of active time,” she says. 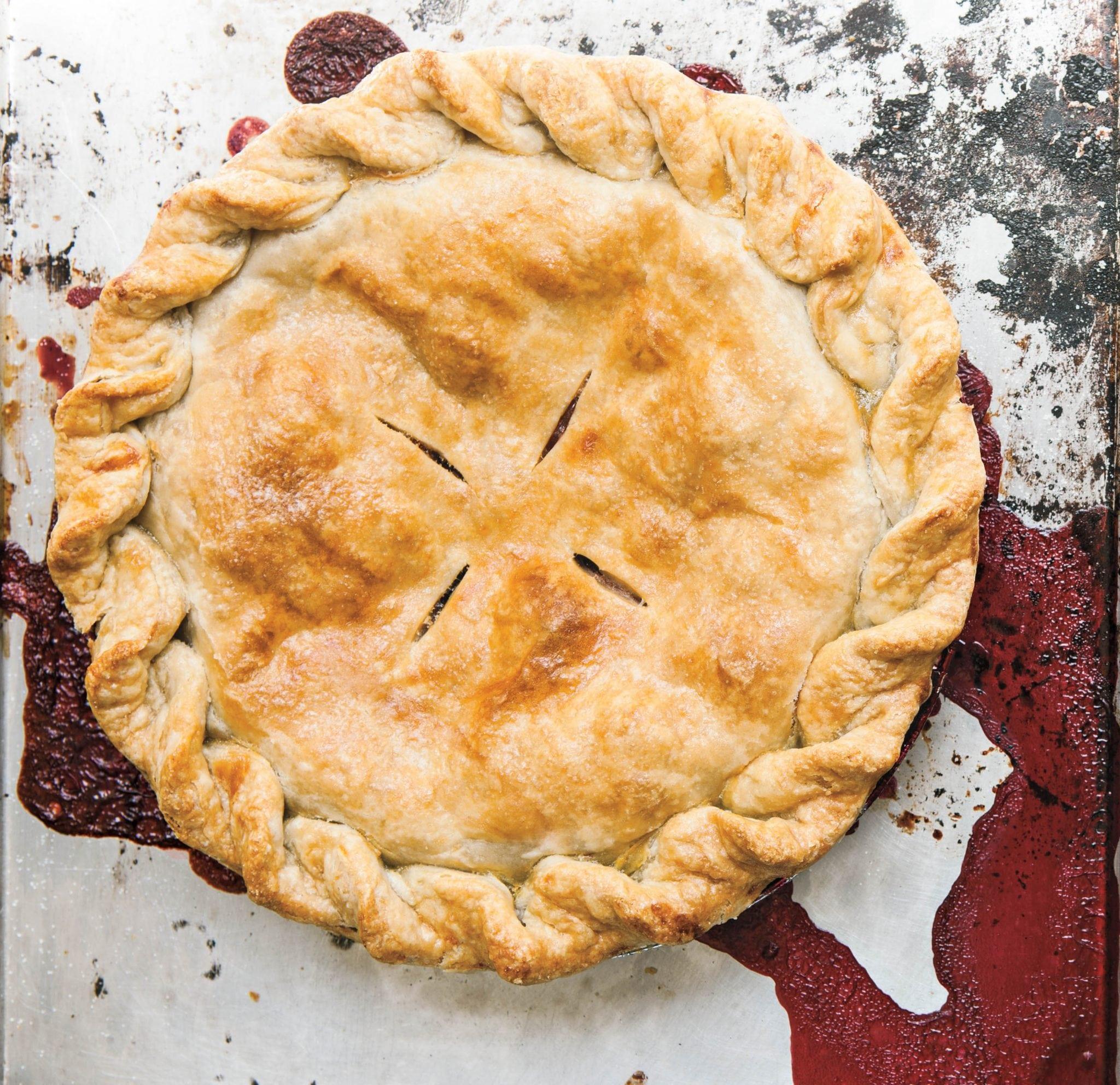 Pies are a great way to showcase fruit in season, and are easier to make than you might think. From Sweet by Valerie Gordon (Artisan Books) © 2013. PHOTO BY PEDEN + MUNK

Combine rhubarb and 1½ cups sugar in a 6-quart saucepan and cook over medium heat for 8-10 minutes, or until it softens.

Mix strawberries, lemon juice and cornstarch in a large bowl and incorporate cooked rhubarb. Allow to cool to room temperature.

Beat the egg in a small bowl. Using a pastry brush, paint the beaten egg around the edges of the crust.

Cover the pie with top crust, trim, crimp and chill until the dough is firm to the touch.

Cut four small vents in the top crust. Paint the entire surface of the pie with beaten egg and dust with remaining tablespoon of sugar.

Bake at 350 degrees for 60 minutes or until the crust has a golden tan.

To make the dough in a food processor: Put the flour, sugar, and salt in the processor bowl and pulse once or twice to combine. Drop the pieces of butter through the feed tube, continuing to pulse until the mixture resembles coarse crumbs. Slowly add ¼ cup water as you continue pulsing a few more times, then add more water if necessary. Stop when the dough just starts to come together.

To make the dough by hand: Put the flour, sugar, and salt into a medium bowl and mix together with a fork or small whisk. Cut the butter into the dough using a pastry cutter or a large fork until the mixture resembles coarse crumbs. Drizzle ¼ cup water directly over the dough, mixing with the pastry cutter or fork, then add more water if necessary, mixing until the dough just comes together.

Remove the dough from the processor or bowl and form into two equal disks. Wrap each disk in plastic wrap and refrigerate for at least two hours, or up to three days. The dough can be frozen for up to two months; thaw in the refrigerator.

Remove one disk of dough from the refrigerator and place on a floured, cool surface. Using a rolling pin, roll the dough out into a 13-inch circle. Start from the center of the dough and roll outward, rotating the dough two to three inches after each roll to help create a true circle. After every four to five rolls, run a large offset spatula under the dough to release it from the work surface. Add a little flour to the surface, rolling pin, and/or dough if the dough sticks or becomes difficult to roll. Repeat with the second disk of dough.