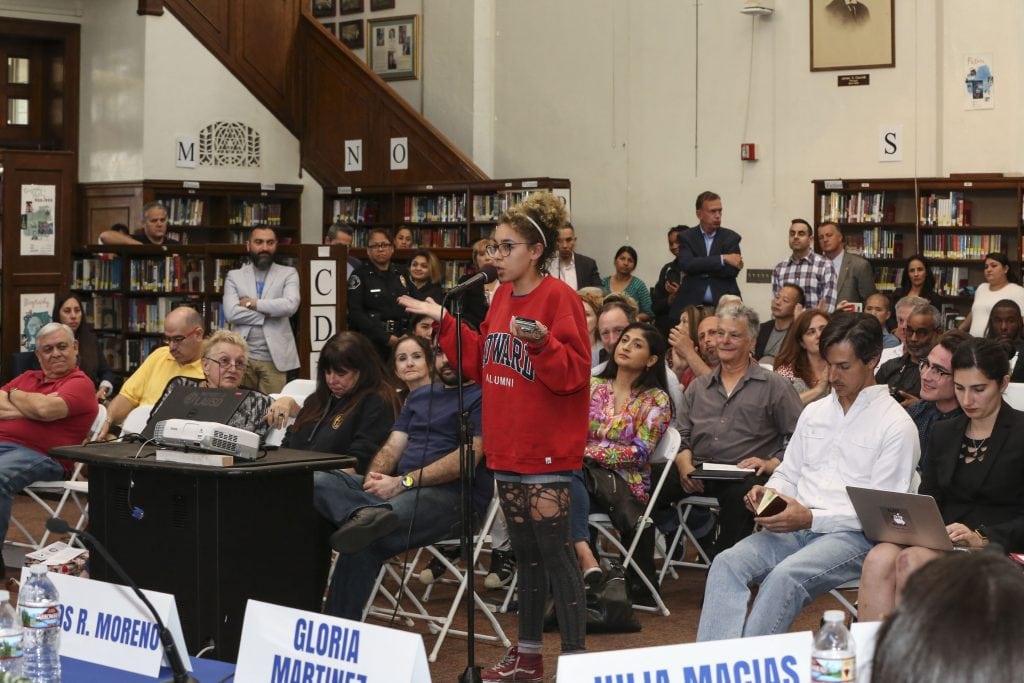 Let’s begin our look at this scary topic with two solid – possibly calming – facts: School shootings are a rare occurrence in the U.S., and there has not been a mass shooting at an L.A.-area school in recorded memory.

Mass school shootings – beginning with Columbine in 1999 through Sandy Hook in 2012, up to February’s shooting in Parkland, Fla. – have spurred the notion that school shootings are the new normal. But in a recent analysis of school-shooting data, researchers at Northeastern University report that the number of shooting incidents involving students has been declining since the 1990s. And among 55 million U.S. school children, an average of about 10 students per year were killed by gunfire over the past 25 years.

The national nonprofit Everytown for Gun Safety lists a total of 290 school shootings in the U.S. since Sandy Hook. Nearly half of those were completed or attempted suicides, accidental gun discharges or shootings without a single injury. Of the remainder, the vast majority involved either one fatality or none at all. Fewer than six of those incidents involved two or more deaths, according to reporting in February by USA Today.

Still, images from mainstream and social media make it appear that school shootings are becoming commonplace. This phenomenon was examined in the play “Ripe Frenzy,” recently staged at Fairfax High School.

In the play, characters react to the details of a deadly as-it-happens mass shooting, glued to their phones as projections and startling imagery overwhelm the stage. Finally, one character shouts: “Why are you watching this? It gets soaked up by your brain, your body, your DNA!”

“The way we react to shootings is to discuss the body count, the killer’s manifesto, the plans, along with a tough guy photo. It’s all glorification,” says playwright Jennifer Barclay, a professor of theater at the University of Maryland who worked with collaborator Jared Mezzocchi on the play. “It’s definitely tough to figure out how to be an activist while also protecting the sanity of yourself and your family,”

Barclay, who wrote the play in 2016, had just had her first child when Sandy Hook happened. Her two children, now in preschool and kindergarten, participate in “hiding drills” where they are taught not to make a sound. “I feel like it’s a wise choice to prepare the students and the schools, and since my daughter did not come home upset from her kindergarten drills, I assume that they found a way to lead the drills that did not scare the kids,” she says. “Whenever the news is reporting on another shooting, I have to turn off the radio. There is no way I am telling my kids that this is a possibility at their age.”

Parent, student and educator concerns over gun violence have spurred school administrators to prepare for “intruder on campus” scenarios along with other emergency situations. This means refining existing emergency and communications plans to accommodate different goals. For example: a fire drill means getting out of the building quickly; an active-shooter drill usually means quietly staying put.

The Los Angeles Unified School District (LAUSD) has engaged various security measures designed to prevent on-campus violence for decades, including the use of metal detectors since 1993. Prior to 1993, about 1,000 weapons were confiscated without detectors. Now, it’s down to about 400 per year with about 20 recovered weapons being guns, according to district public information officer Daryl Strickland.

Random searching and wanding of students is another LAUSD strategy designed to discourage students from bringing weapons onto campus. While officials stress that the procedure is entirely random, many groups of students and parents raise concerns that searches by wand tend to focus on students of color. An analysis of random student searches by UCLA’s Civil Rights Project revealed that these searches rarely result in weapon finds. 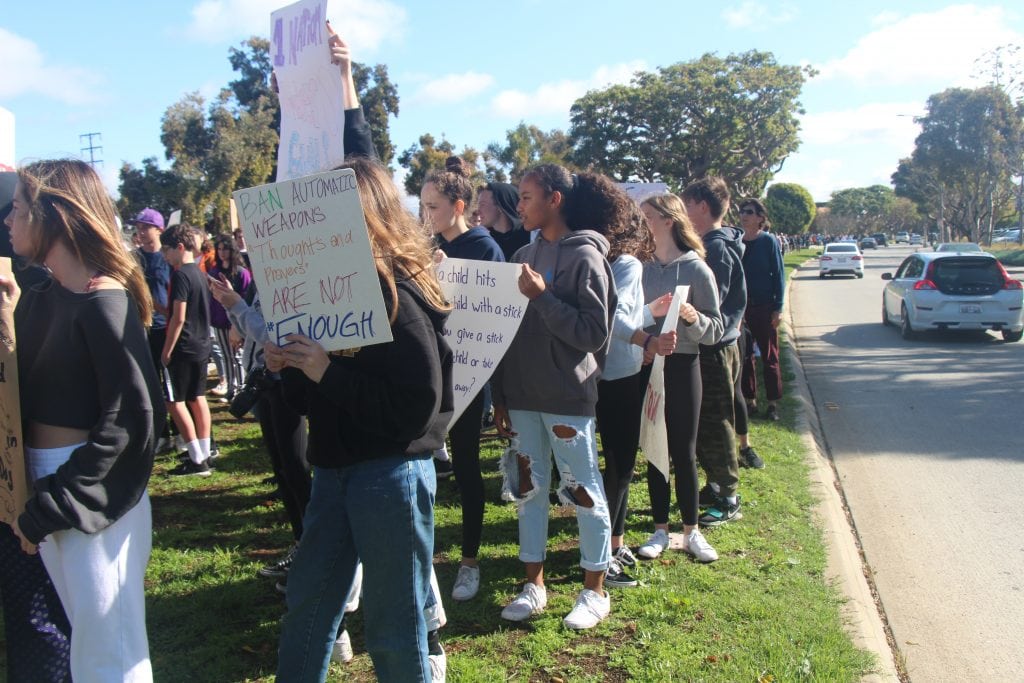 Eighth graders at New Roads School launched protests against gun violence and spent time learning to activate for political and economic change – all of their own accord. PHOTOS COURTESY NEW ROADS SCHOOL

Many schools have increased use of campus security guards and most work with nearby law enforcement agencies to coordinate emergency drills and plans.

According to the U.S. Government Accountability Office, two-thirds of U.S. school districts conduct active-shooter drills. Most drills focus on teaching students to be quiet, huddle and wait. Recently, the California Department of Education instructed students and teachers to, when appropriate, “run, hide and fight.” Some campuses have pails of rocks for just that possibility.

But are drills, additional security officers and metal detectors enough to prepare for a potential shooter?

The goal, says Feuer, is to craft a series of recommendations, to be released later this year, which could transform LAUSD campuses into models of safety and security efficiency, as well as foster a community of care and prevention.

“We don’t want to just come up with a set of recommendations. We want to make sure they will be implemented and not just sit on a shelf,” says Feuer. “The panel will also recommend resources to implement these recommendations from the business community, philanthropic community and all levels of government.”

Some recommendations, Feuer says, would be common sense and cost little to implement. Others would be more involved financially and structurally.

Private schools are also beefing up campus security in obvious and subtle ways. Many have retained outside security firms to provide an overall safety assessment. How secure are the school’s fenced perimeters? Could weapons be tossed over gates or dug underneath? Where are the entrances and exits? Who buzzes in outsiders? Can classroom doors be locked from the inside? Which staff members are part of the emergency team?

Safety teams are assigned to schools and embed themselves into campus culture, learning student and staff personalities. Teams are trained to be aware of trigger events (a divorce, a favorite teacher being fired, disturbing social media posts) and assess threats, working with the school to monitor and facilitate potential situations. “Our goal is not to work with the schools forever, but to teach them all they need to know,” says Joffe, adding that schools generally work with his company three to five years.

Other efforts are focused on saving lives if a campus shooting does occur. The national Stop the Bleed program (bleedingcontrol.org), for instance, offers basic training on bleeding control principles. The program was founded by the American College of Surgeons Committee on Trauma following the 2012 mass shooting at Sandy Hook Elementary School, where many children quickly bled to death. 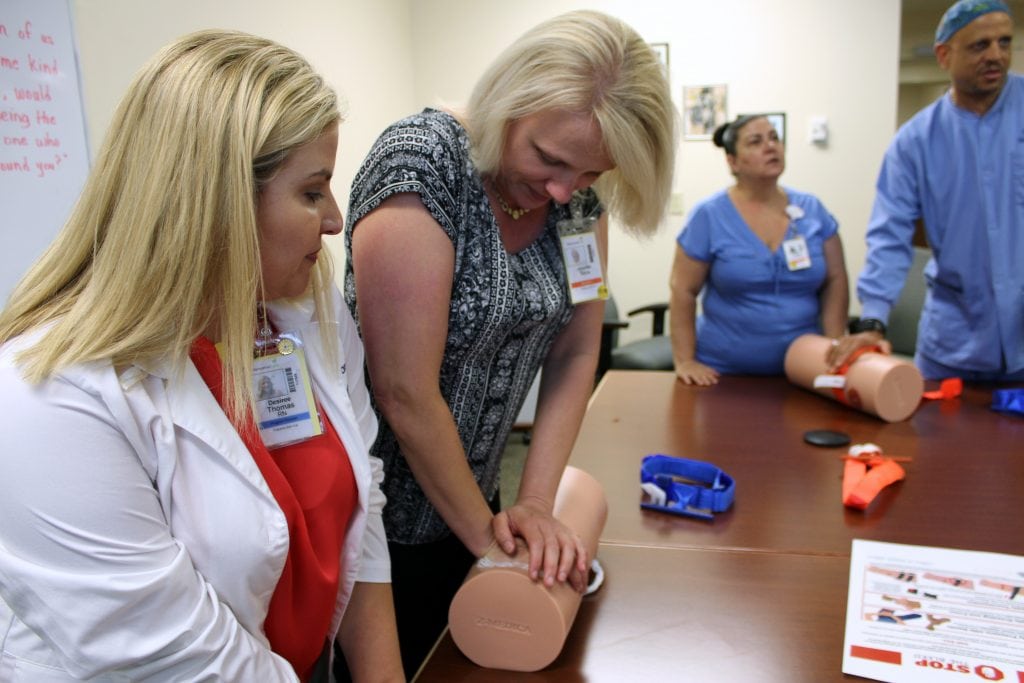 A national program called Stop the Bleed offers basic training designed to save lives in the wake of a mass shooting or disaster. Classes are offered locally. PHOTO COURTESY STOP THE BLEED

Just like CPR and defibrillator training, the hour-long training sessions involve hands-on instruction in how to determine whether a bleeding injury is life threatening and how to effectively apply pressure, use tourniquets and pack a wound to control bleeding.

The program is offered through Children’s Hospital Los Angeles and at other SoCal locations. Miller Children’s & Women’s Hospital in Long Beach has plans to offer training to teachers and staff at local Long Beach schools – and hopes to expand beyond.

One positive aspect of these preparations is that many schools are emphasizing the importance of prevention by embracing the whole-child theory of education, working to give students tools to understand and navigate their social and emotional lives – and interact more positively with one another.

Alhambra Unified School District’s Gateway to Success program began 10 years ago with the simple idea that mental-health issues impact a child’s learning and life choices. The program weaves together leadership and involvement from nearby police and fire departments, local businesses, community agencies and higher education partners, including UCLA.

Gateway to Success provides socio-emotional health education to students at all grade levels – and their families – in and out of the classroom. This includes support from supervised clinician interns who are training to become social workers.

The program also provides scholarships and housing assistance and addresses food-security issues. “Because who can study when you are hungry?” asks program founder Dr. Laurel Bear, who retired from the district in May. “We always talked about trauma in older kids, but we never seemed to address where it comes from.” Food insecurity, homelessness, grief and abuse can often lead to lethal student despair, Bear says. Monthly food pantries organized by local organizations even offer service opportunities for students, with former recipients returning to volunteer.

Accentuating the positive is the focus of the Positive Behavioral Interventions & Supports program, now in its sixth year in the Pomona Unified School District. Schools in the district host assemblies to honor students who demonstrate good behavior, and address incidents of bullying with a “conscious discipline” technique where students work together to resolve problems.

In a new approach to Saturday detention, students attend Saturday School to make up missed class time by participating in educational hands-on activities such as model- rocket launches. Many students show up who aren’t in trouble, creating a lively school community beyond traditional school hours. “We are changing how we have done business after all these years,” says Pomona Superintendent Richard Martinez, adding that expulsion and suspension rates have dropped throughout the district.

Ultimately, whatever programs organizations and administrators put in place, much of the change in campus culture may come from the students themselves. New Roads School in Santa Monica has emergency plans in place and actively engages in preventive emotional education, but Head of School Luthern Williams says students are adding their own voices to the narrative.

Eighth graders on campus launched recent protests against gun violence and spent time learning to activate for political and economic change – all of their own accord. “They are going to be the real agents of change,” says Williams. “This generation of conscious students gives me hope for the future.”

Brenda Rees is a freelance writer living in Eagle Rock. Her work has appeared in The Los Angeles Times, Westways Magazine and Arroyo Monthly.