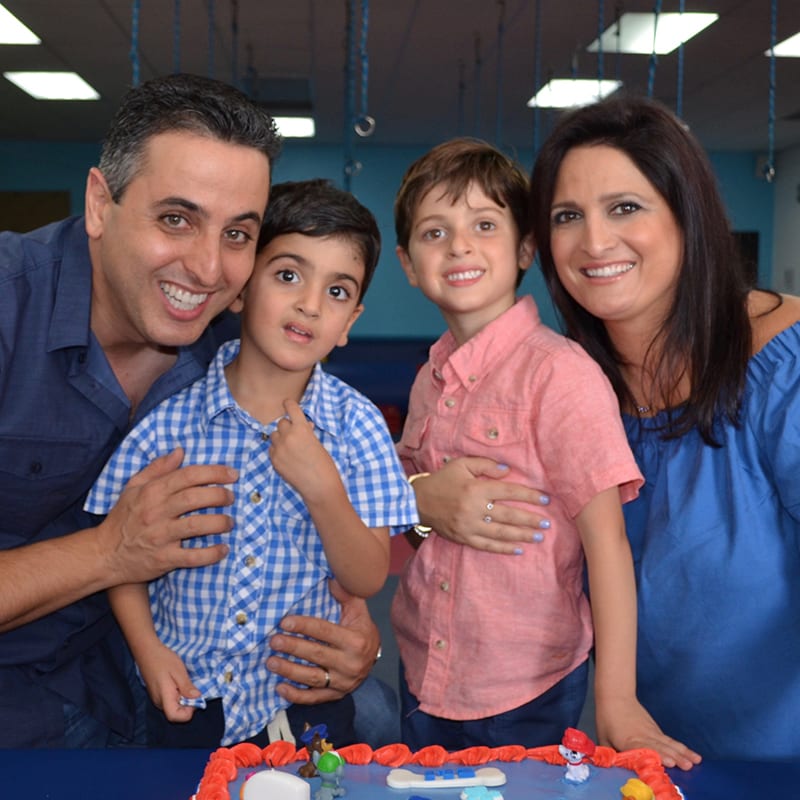 When Eli Kadkhoda was born in 2014, he developed like a typical child, but was diagnosed with a rare neurological disorder in 2017. Behdad, Eli, Aaron and Sanam Kadkhoda pose for a family photo. PHOTO COURTESY SANAM KADKHODA

When I worked for the Dodgers, I oversaw their community relations’ health pillar, a project designed to reach out to those in the L.A. community who are suffering from serious illnesses, to send them gift packages that included paraphernalia signed by their baseball idols and sometimes to give them a baseball experience of a lifetime.

A teen whose cancer was in remission got to hang out with his (and most everyone else’s) favorite pitcher, Clayton Kershaw, for a few hours. A 7-year-old with a rare genetic disease and short life expectancy threw the first pitch from the pitcher’s mound. As the crowd roared, the kid grinned just as big. A boy who lost both legs rolled around the field in his wheelchair, with team manager Dave Roberts tagging behind him.

I worked with foundations and families, and while the experiences were beautiful, one of the most heartbreaking realities was saying goodbye to those fans, many of them children, who would leave the stadium still struck by rare and devastating illnesses. It left me speechless to hear about the Kershaw fan whose cancer came back. To learn that another kid, 8, had lost his battle with brain cancer.

To stand as witness to suffering is unbearable, especially when the victim is a child. And yet, chronically ill children’s parents dig up strength every single day to care for their children and fight for them. Without their strength and vision, and the support of their communities, we would have no Make a Wish, no Alex’s Lemonade Stand Foundation, no STAND BY ELI Foundation.

If you’ve never heard of that last one, that’s no surprise. It was started here in L.A. just this past September. A project of The Giving Back Fund, a 501 (c)(3) nonprofit, the foundation was founded to support Eli Kadkhoda and others like him who have been affected with mutations and truncations of the IRF2BPL gene. This gene encodes a protein that is expressed in many organs, including the central nervous system. Children with a mutation of it are born without symptoms, but somewhere between the ages of 1 and 10, they begin to lose motor skills. Over time, they lose the ability to walk, hold up their heads, to speak, to see. To eat, they need feeding tubes.

After his own neurological regressions and after undergoing multiple tests, Eli was diagnosed in November of 2017. His parents tried not to despair. His mother, Sanam Kadkhoda, says that one neurologist told her she should cancel her scheduled appointment with him because he didn’t want to waste her time and co-pay telling her what other neurologists had already said: that they knew nothing about the disease and that there is no cure. “I paused and, with tears, I said, ‘So I’m just supposed to sit back and wait around for the worst thing on Earth to happen to my son? There’s nothing I can do for him? There’s nothing we can try? If this were your son, would you do nothing?’”

The doctor told her that she would need to raise at least $6 million for a lab to take on medical research of the rare disease. At first, this felt impossible to Kadkhoda. “I felt like I was failing at being a mother,” she says. “It took me about a month before I gained courage to really fight for Eli. I made several phone calls, talked with other families, called children’s hospitals nationwide, asked anyone in the medical profession for leads on how to find researchers…”

Eventually, the impossible became possible: she entered into a partnership with Texas Children’s Hospital and Nationwide Children’s Hospital. “The most amazing part is that they are collaborating and sharing information to expedite the research,” Kadkhoda says. “Competing labs almost never share information. It’s really been amazing.”

The best part? “They didn’t need $6 million,” she says. “They saw the potential to unlocking mysteries around other neurodegenerative diseases, like Parkinson’s and Alzheimer’s, and they even found a link to autism. The possibilities were endless! Together we are now finding answers otherwise unknown. We are unraveling a human gene that affects every cell in the body. This is huge.”

The fact that, in just a few short months, the STAND BY ELI Foundation (standbyeli.org) has been able to raise more than $600,000 is also huge. The organization hopes to eventually raise millions. “Our community has been so supportive, more so than I ever could have imagined,” Kadkhoda says. “Women were collecting money during their luncheons with friends. Some of these women didn’t even know us and they went out of their way to raise funds for us. People are setting up matching donations on their social media, collecting items for auctioning. It’s been unreal!”

As the community pulls together to raise funds and lab scientists continue to study, Eli is doing well, his mother says. “He is gaining skills and learning more and more every day. We take him to physical therapy, occupational therapy and speech therapy multiple times a week to aid in his progress. He also goes to an amazing school which gives special-needs children the attention and instruction that they need.”

And yet, the quest to “stand by Eli” is bigger than Eli. “We are in touch with several families whose children have been severely affected by this disease,” Kadkhoda says. “Before we decided to go public with our fight, I spoke to two of the families. They were explaining to me the details of the disease and what their daily lives are like. It was then that I realized we were given a gift, the gift of knowing ahead of time, so that we can save Eli and these other families. They are so deeply involved in doctors’ visits, therapies and hospital visits that they would not have the time to fight for their children the way our family can. I made promises to each of them that I would fight for their children like they were my own. I really believe that a higher being is lifting us and making things happen.”