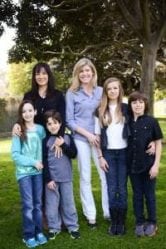 Moms Suzanne Tabachnick and Kelly Priest met seven years ago in an early-intervention program for children on the autism spectrum. They had an instant connection.

Priest has a Master’s degree in clinical psychology and several years of experience working with families. She attended conferences on “Social Thinking,” a concept pioneered by speech language pathologist Michelle Winner, and shared her interest in the approach with Tabachnick, who then completed mentorship and clinical internship training with Winner at the Center for Social Thinking in San Jose.

“Kelly and I kept talking about all these ideas we had and we realized that together we could do so much more,” recalls Tabachnick. They launched Social Foundations in 2006 in a small space in Culver City, which they outgrew in the first five months. They outgrew their second office in Santa Monica eight months later.

Now operating from locations in Santa Monica and Sherman Oaks, Tabachnick and Priest – along with three therapists and one assistant – have a growing practice focused on providing kids with practical tools to better understand social cues, interact in groups and develop friendships. Some of their students are on the autism spectrum, others have learning differences and some have no specific diagnosis, but face many social challenges.

“Social learning is about building insight and awareness of yourself and of others around you,” says Priest. “A lot of the kids we see are not even aware that their behavior is affecting other people’s feelings.”

Through interactive play and group projects the students begin to better understand collaboration and consideration for others’ perspectives. By using specific words and phrases such as “because” or “let’s try this” to explain their thinking and actions, they become better advocates for themselves.

Priest and Tabachnick get great satisfaction when their students receive an invitation to a party or a sleepover. “It’s so rewarding when parents tell us their kids are finally making real friends,” says Priest.

“Our goal is for our students to have typical childhood experiences … go on camping trips, be in a play, join a sports team,” adds Tabachnick.