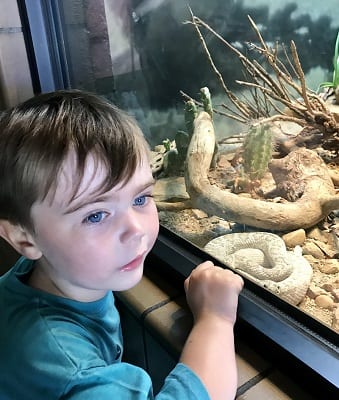 Taken by a weeklong sweep of toddler nagging, a few Saturdays ago we took our kids, Hank and Leo, to the San Diego Zoo. “Why do we keep going up and down so much?” Hank, who is 4, kept asking as we climbed hills to reach the zoo. My wife, Kate, and I glanced at one another: “How are we going to do this?”

There’s something about going to the zoo that brings out a parent’s primal instincts – namely survival. That Saturday, the zoo was packed with stressed-out or spaced-out parents. But I’m here to help. Here’s how, as parents, you can get the most out of your family zoo trips:

First, plan your route. Every major zoo seems to have been designed by one of its inmates, as if mapped out by a chimp throwing feces at a wall. How to navigate this carnival of trapped animalia?

At the San Diego Zoo, you’ll be tempted (especially by your 4-year-old) to run down the middle. Hank spotted signs for the most crowd-pleasing mammals, such as the gorilla, tiger and pandas, at the center of the complex. But every big leaguer knows you must work the corners to get an out.

I told Hank, “Hold on, let’s start left, take a trip around the warning track and back onto the field.” I figured that, like in a museum, you veer left and go around. That takes you past the tortoises, the red pandas (not the cool pandas, those Asiatic raccoons), the deer-like mammals that you always call gazelles but that aren’t, and the flamingo lagoon – a weird pink stink. There are also windy deer trails where you can view Hank’s favorite African natives: the hippo-rhino-giraffe trifecta. Then you work your way toward the highlights within the core of the park: the primates, pandas and crowd-pleasing shows.

Or, you could visit the more-manageable zoo here at home. Because somewhere on the back end of Griffith Park, there happens to be a world-class zoo. We take it for granted. It’s just there. I always think of my childhood when it comes to the L.A. Zoo. I hold plenty of memories of me as a kid perched atop my dad’s shoulders, looking at the giraffes, eye-level, while the sun burned our foreheads. Hank and Leo have now been there twice. And although it lacks the Michael Crichton-like bravura and curation of San Diego, L.A. does have just about every biological asset the smaller city’s mega-zoo has.

“Well, looks like we’ve seen everything,” Hank said after a short while on a recent visit. “Let’s go.” This mindset was unthinkable in San Diego. Hank is like me: he’s a completist. He needs to see everything a place has to offer and stresses if he has the sneaky sensation that he has missed something. This can get tiring. If you have to see everything, your best option at the L.A. Zoo – unlike at San Diego – is to go straight up the middle. Go past the crocs, chimps and African safari fauna, then circle around the whole park.

Now that we’ve gotten the two big elephants out of the room, what about other zoos in Southern Cali, some of which don’t have … well … elephants? Turns out there are places with caged wildlife throughout this fair region of ours. Smaller, more parochial zoos tend to focus on the local fauna – your native Angelenos, if you will. The Orange County Zoo in Irvine Park is inexpensive, well maintained and generally stress-free, unless your 4-year-old gets the impulse to stick his arm in the mountain lion cage. They have lots of cool semi-indigenous species of snakes, herbivores and, of course, an epic petting zoo. You can be in and out in 30 minutes. It’s a winning investment for a quick zoo fix.

Speaking of Sycamore trees, there’s a fantastic zoo on Santa Barbara’s eastern coastline. These must be the happiest animals in captivity. The Santa Barbara Zoo was one of my childhood favorites. They have a tiger, but you get the feeling that even if the tiger could escape, it’d rather just stay in its neat, perfectly naturalized confines. Well done, Santa Barbara. There is a sedative quality to the space. It feels almost too relaxed, unlike the aforementioned zoos, where Hank and Leo had to storm through everything in a capacious flurry of excitement. In Santa Barbara, Kate and I were able to gaze at the opulent digs for the black bears, while continuously sipping coffee. This is where you go if you don’t want to pass out from exhaustion on your way back home.