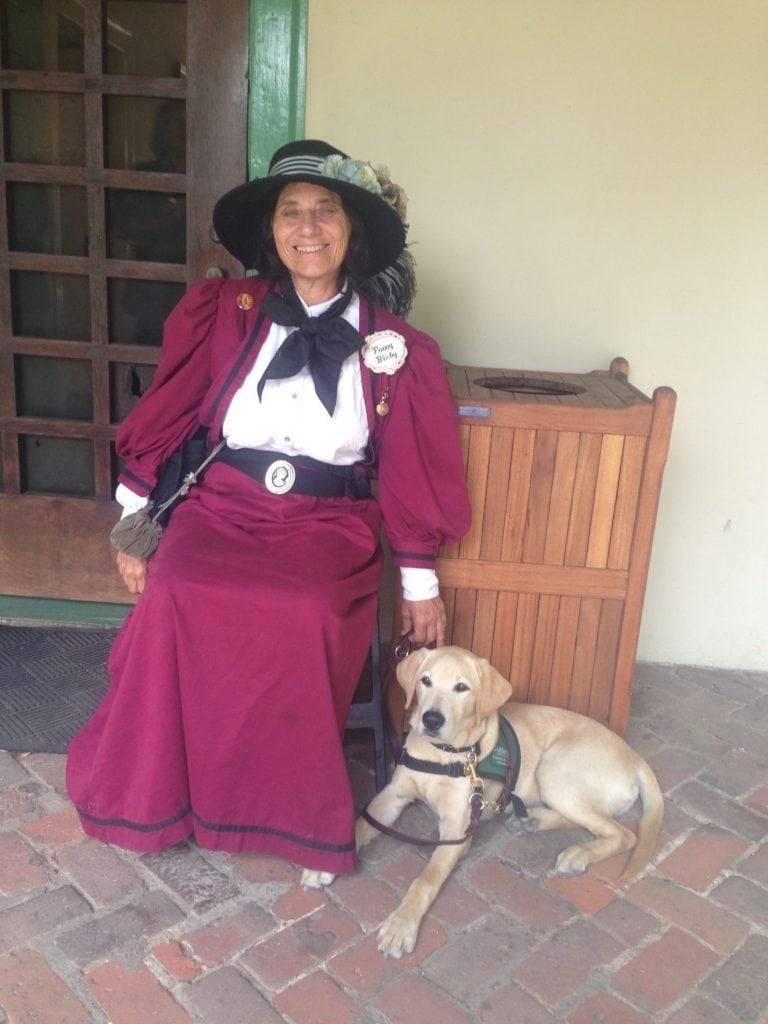 If your family is headed to one of the monthly Creation Station art workshops or other family events at Rancho Los Cerritos (4600 Virginia Rd., Long Beach; www.rancholoscerritos.org), keep an eye out for Marcia Harris and her canine companion. A longtime volunteer at the rancho, Harris also raises service dogs.

Harris began volunteering at the rancho, an historic adobe house and surrounding property dedicated to inspiring curiosity about the past, in 1969, while she was still a college student. Eventually she also devoted time to puppy sitting for people raising service dogs.

In 2010, she took on the responsibility of raising a dog for Guide Dogs of America and thought she would have to give up her work at Rancho Los Cerritos because guide-dog raising is a full-time responsibility. But the volunteer coordinator had other ideas. “Why don’t you just bring the puppy?” she asked. Dogs aren’t normally allowed at the rancho, but guide dogs (and those in training) are an exception.

“The first time we went there, [the puppy] saw a squirrel and jumped out of my arms,” Harris says. But Harris has been bringing her dogs there ever since and spending time at the Rancho has turned out to be a good thing for the dogs, exposing them to lots of sights, sounds, smells and people. “All my puppies pass the test of steep steps,” says Harris, because of the many steep steps they must traverse in the adobe house. Her dogs get used to the costumed characters who populate rancho events and her current dog, Aragon, has even learned not to chase the croquet balls during play on the rancho lawn.

Harris and her dogs also serve as ambassadors of sorts. The kids and parents who visit while she is volunteering get to see the dogs and ask questions. When she works the rancho’s Creation Station events, some of the kids have learned that when the dog’s vest comes off, he can play. “I want them to understand about guide dogs, so I do a lot of talking to them about that,” she says.

And Harris says the dogs make great volunteers. “My puppies are the only ones that never complain about the heat,” she explains.

She now raises pups for Guide Dogs for the Blind, which requires the highest level of training, and Aragon is her fourth. “I was only going to do one originally,” Harris says. “It’s kind of addictive.”