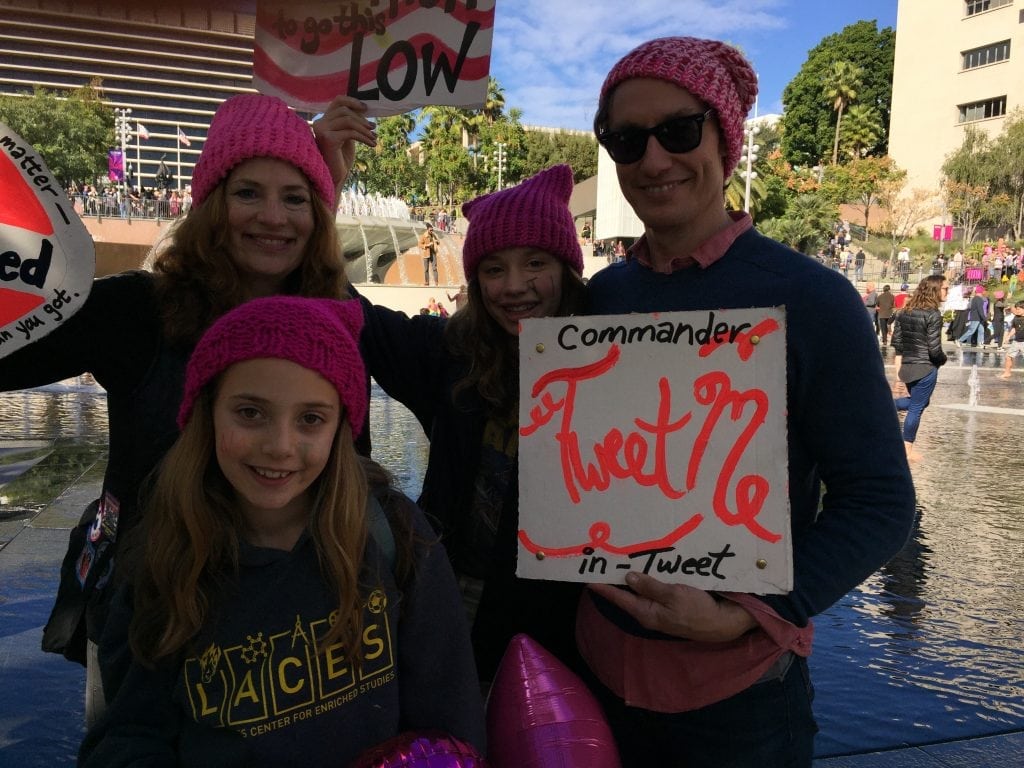 Amy Kiehl Miller, her daughters and her husband marched as a family in the Women’s March Jan. 22. “It was an important statement for us to make as a family to each other and the general population,” she says. PHOTO COURTESY AMY KIEHL MILLER

On election night 2016, Diane Michaeli of La Crescenta watched the returns come in with her 13-year-old daughter, Carmela. Like many families in the L.A. area, they were supporters of Democratic candidate Hillary Clinton and were surprised by the results of the presidential race.

“When it slowly became apparent that she had lost, sadness descended upon us,” Michaeli says. Carmela began sobbing. “I realized that I couldn’t lose myself in that moment and moving forward I had to model positive actions,” says Michaeli.

Whether your family is also unhappy with the results of the November election or you’re just unnerved by the uncertainty, divisiveness and nasty rhetoric that is now prevalent, the current political climate presents challenges for parents.

You’ll need to deal with your anxiety – and your child’s – whether that comes from policies you disagree with or assertions that economic and social collapse and terrorist attacks are imminent.

Before trying to address your kids’ worries, find out what those might be. Ask what your children have heard is happening in our country and what their friends are talking about. Isaiah Pickens, Ph.D., is assistant director of service systems at the National Center for Child Traumatic Stress at UCLA Neuropsychiatric Institute and Hospital. He points out that younger children might be hearing words they don’t even understand, adding to their fear. “First, find out what your kid knows,” Pickens says. “Then you can start providing comfort.”

Realize that your children’s fears might show up as feelings of stress but also might take the form of frustration, depression or acting out – including getting into fights with siblings or kids at school. Your own fears and uncertainties, meanwhile, could make you less patient in dealing with your kids, or less available to them because you find you need more time for yourself. “When parents have a sense of uncertainty, it can potentially compromise your parenting,” says Pickens.

Talk with your children about their feelings and your own. That’s the approach Amy Kiehl Miller, Larchmont-area mom of daughters ages 11 and 13 and Girl Scout troop leader, took. “I have had open and frank discussions with my children, acknowledged their fears and cried with them,” Miller says. “Some might think that letting them see I am vulnerable could make them more nervous, but I really believe that if you let it out, discuss it, acknowledge it – no matter what ‘it’ might be – some of the scariness goes away and the whole issue becomes more manageable.”

Correcting any misinformation or distortions your children have heard will help them feel safer. “Provide accurate information about what is happening,” Pickens advises. Do this in an age-appropriate way, but don’t skirt the issue. “As parents, we want to fix what’s wrong, but sometimes that can be invalidating to kids’ experience,” Pickens says. “Be authentic.”

Pasadena-based clinical psychologist Enrico Gnaulati, Ph.D., suggests one way to put things in terms kids will understand. “People elected a president who’s got qualities of a bully,” Gnaulati says. “Some people think that’s a sign of power, but it really isn’t.” You can also point out that the president doesn’t always act on the things he says. “He’s impulsive. He says things without thinking first, and I think that’s a nice lesson for kids to learn,” says Gnaulati.

And if your family feels they or friends or loved ones are threatened by current political developments, talk about that as well.

La Cañada-based journalist and chef Kaumudi Marathe says her 15-year-old daughter, Keya Bajaj, has been frightened because Marathe and Bejaj’s father are not U.S. citizens, though they do have green cards. Bejaj has also been worried about her best friend, who is Syrian. “Keya has grieved with her and the two cried together the day after the election,” Marathe says. 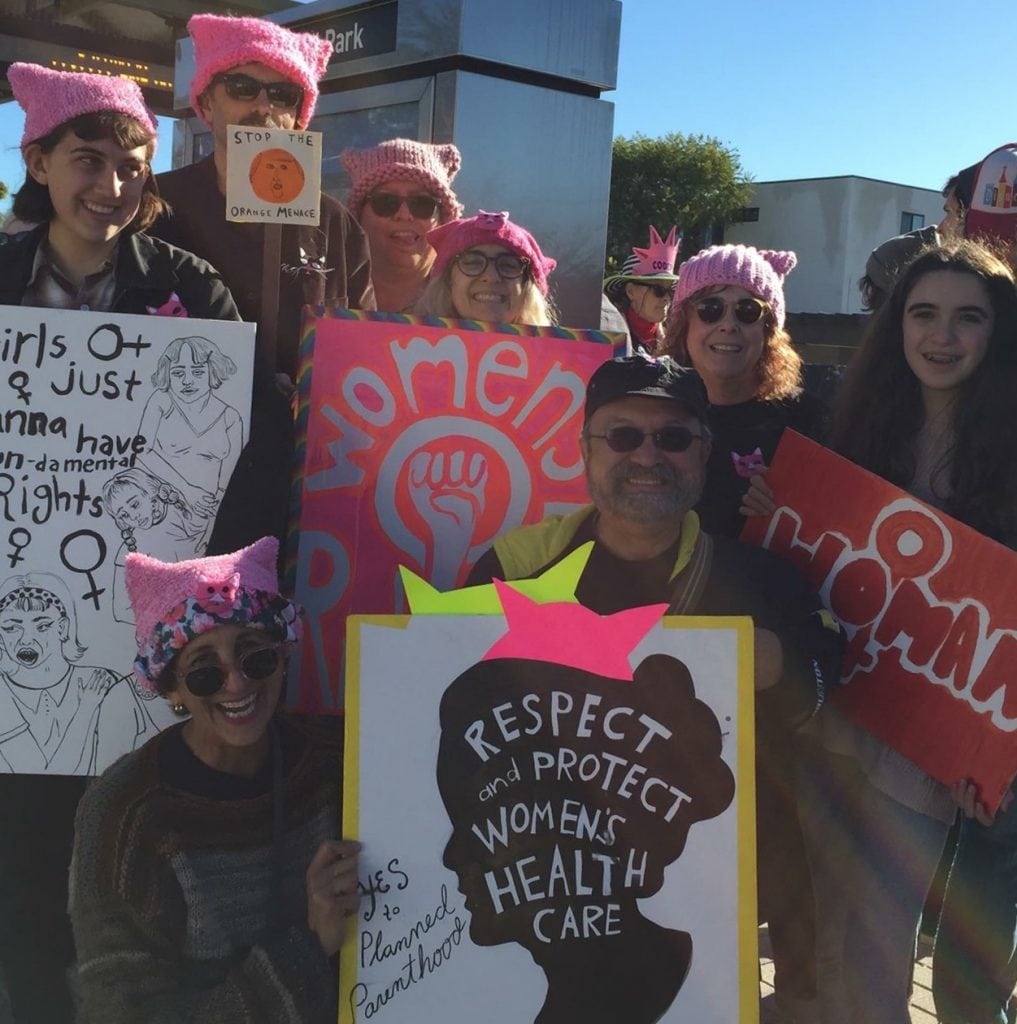 Diane Michaeli, fourth from left holding the bright pink sign, attended the Women’s March in L.A. with daughter Carmela, at far right, and says the march helped Carmela feel like she is not alone in her views. PHOTO COURTESY DIANE MICHAELI

Marathe and her daughter had long conversations about the election and current events, but she found herself with few answers and little comfort to give. “All I could do was hug her and say that the human spirit was strong and we would get through this,” she says. “That the people who voted for Trump felt they had reasons to do so and we must respect their choices but not allow injustices in our watch. If we saw someone being hurt or bullied, we had to step in and help.”

The National Center for Child Traumatic Stress has lately heard from many people worried about their immigration status. Pickens advises those who are parents to talk with their children about their emergency plans in case of arrest or deportation. “Share with the kids what you will do if that were to happen, where they will go, with whom they will stay and how you will be working to get back together,” he urges.

You should also think back on another time when your family faced a serious challenge, remind your kids of that and explain how you overcame those circumstances. Let them know that you are staying on top of these issues and have a plan to keep them safe, and remind them of all the friends, neighbors and extended family who are here to help. “Help crystalize just how big your support network is,” Pickens says.

This is also a great time to teach your kids about our democracy. “We’re all getting a massive education about our political system right now,” says Terri Harrah, Santa Clarita mom of 9-year-old and 12-year-old boys. Though she’s not delighted by recent political developments, she says that she’s been having “big conversations” with her sons about human rights and other political topics her parents never addressed with her.

In Kiehl Miller’s family, they read New Yorker magazine and newspapers and talk about what they read. She also recommends talking about the Civil Rights Movement that began in the 1960s. “Let the kids draw their own conclusions about how we, as a society, take two steps forward and one step back,” she says. “Let them know that the next time we take two steps forward, they will be longer and easier because we have been there before.”

Agoura mom of three Rina Baraz Nehdar supported a third-party candidate in the election, and didn’t miss sharing a teachable moment with her sons. “My 6- and 8-year-old boys have grown up going to protests and rallies and know they have a voice in their government,” Nehdar says. “Even if the candidate we liked did win, I told them there would still be policies they would implement that would oppose what we believe in. No one can give you everything you want. We would still make calls and write emails to our representatives. We would still attend protests and let them know the issues that were important to us, and why.”

Many parents are taking advantage of this time to remind their children of their family’s values. Harrah says that her sons, at their level of maturity, think some of President Donald Trump’s bombast is funny and cool. “Whether I like it or not, this guy’s a role model,” she says. 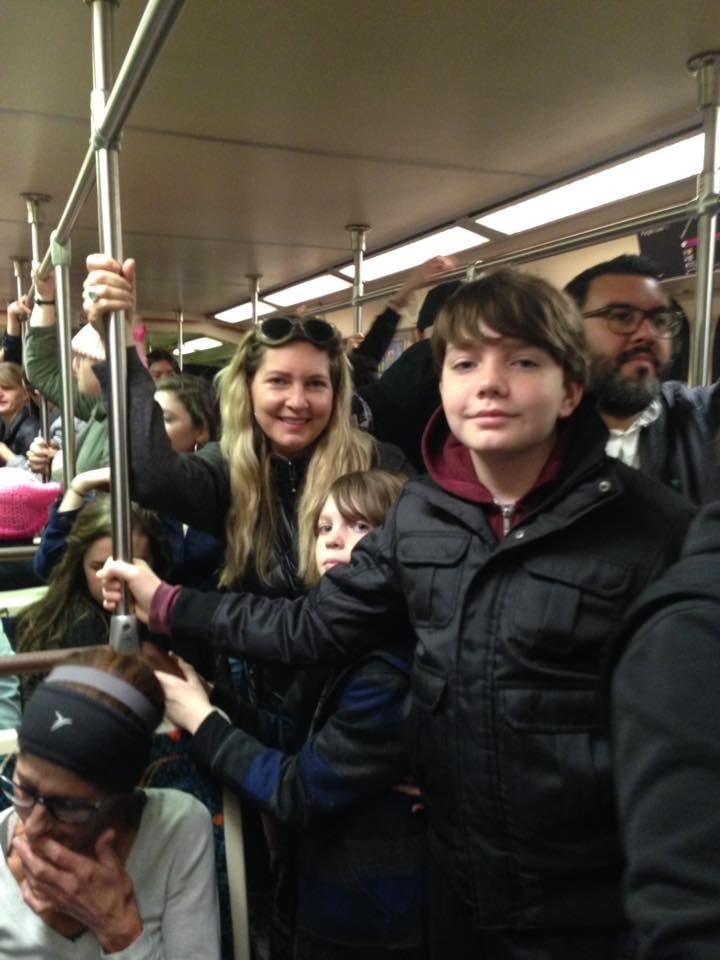 Terri Harrah and her family took the train to the Women’s March in L.A. in January. She says they came away from the march with “a sense of hope.” PHOTO COURTESY TERRI HARRAH

When she took her family to the Women’s March in January, she had to explain to her sons some of the things Trump has said about women – and clarify that this isn’t OK with her. “I think this is helping people fine-tune their values, and what they really want their kids to learn,” Harrah says.

Many local families attended the march together, with parents using the event to teach their kids about causes they believe in. Gnaulati applauds this idea. “Look for very targeted ways to stand up for what you believe in, political and otherwise,” he advises. This might mean making donations, volunteering or joining demonstrations.

After attending the Women’s March with her daughter, Michaeli chose a cause where they could volunteer together weekly. “So, my daughter and I both volunteer at a transitional home for women and children,” she says. Michaeli also started teaching yoga at a women’s prison. “I believe showing my daughter through example how and where to put your energy is the best thing to do in the face of this current political disaster,” she says.

Gnaulati and Pickens warn, however, not to let this all overwhelm family life. “It’s easy to get tantalized, mesmerized, obsessively offended, obsessively disgusted,” Guaulati says. “Step back from it all. Engage in family life. Create a healthy bubble.”

This means protecting your home environment by minimizing media exposure, putting away cell phones, having regular meals together (where conversation centers around other topics) and taking time for other family activities you enjoy. Routines help counteract uncertainty and fear. “These little things can go a long way in restoring a sense of stability,” Pickens says. “As parents, you have the ability to create this safe space in the home.”

Pickens also recommends taking more time to connect with your community – whether that means your religious community or local activities and organizations you support. This helps give kids a sense of being connected to something safe, something good, something beyond the reach of what they see in the political realm.

“We have to highlight that sense of community,” Pickens says, “and help people understand that they’re not alone.”