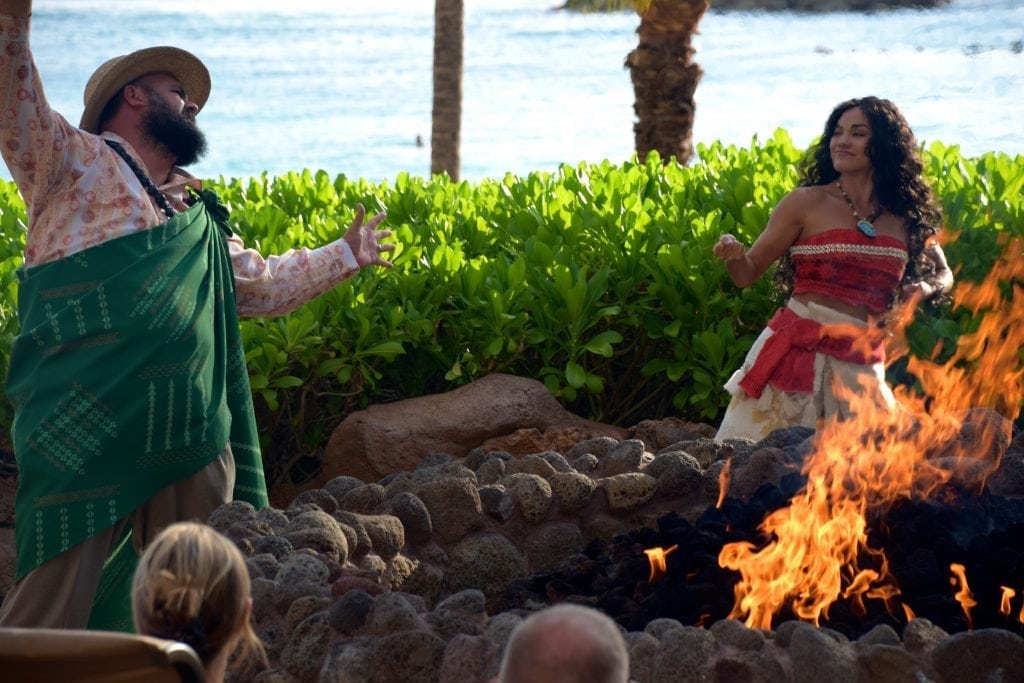 Uncle and Moana tell island tales to visitors around a campfire. PHOTO BY RINA BARAZ-NEHDAR

On a visit to an island, you expect to see lots of water. My family certainly did on a recent visit to Ko Olina, on the western side of the Hawaiian island of Oahu. But during our stay at the Aulani Disney Resort and Spa, we were also surrounded by a dose of Hawaiian culture.

In the Aulani’s Maka’ala (eyes wide open) lobby, we found floor-to-ceiling windows, polished wood and stone instead of the expected primary colors and Disney characters.

Yes, we did catch glimpses of Moana at a campfire story time, and the resort offers a character buffet breakfast. But the focus is mainly on keeping things authentic. “We worked with a cultural committee to ensure we were honoring authentic Hawaiian culture,” says Aulani spokesperson Noriko Harimoto. A celebration of that culture is everywhere, including the kids club, named Aunty’s Beach House. Island children often refer to adults – even those not related to them – as “Aunty” or “Uncle,” and the aunties and uncles at the beach house so charmed my boys that they proclaimed it the best kids club they’d ever visited.

They also loved the water. We first decided to race each other down the two big water slide tubes in the middle of the resort’s seven-acre Waikolohe Valley. Husband Howard and I lugged our giant doubles raft up the stairs, plopped it into the watery platform at the top of the slide and squeezed our tushies into the little holes.

We spotted our boys tucked into their yellow raft at the top of the opposite tube and yelled, “Ready, set, go!” We launched down the dark tube, screaming, hollering and hooting. We were spit out into a pool, victorious, seconds before our sons popped out of their tube. They emerged from the shallow water laughing, hugging our necks and promising revenge.

On our way to the ocean, we stopped to explore another of the resort’s pools, Rainbow Reef. It’s like a giant aquarium where you can swim with the fish. 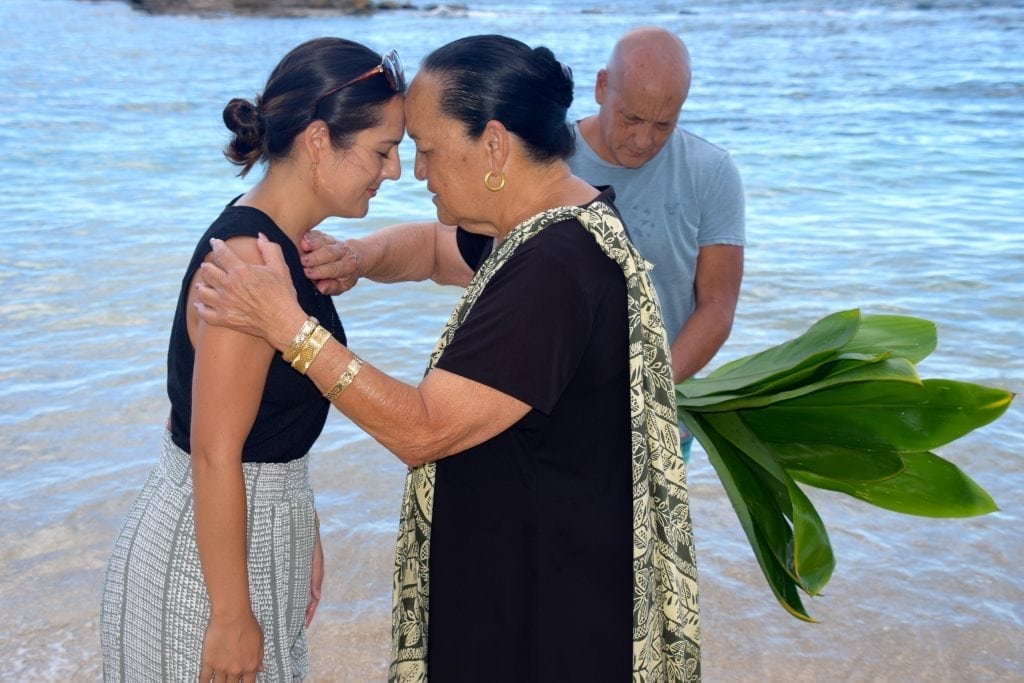 We rented snorkels and masks and went into the cool water in inflatable vests. Without ocean currents pulling and twisting us, we could just chill and let the weirdly shaped technicolor fish swim around our floating bodies. And without the ocean’s nooks and crannies to hide in, the marine life was right there, all around us. My sons’ eyes, already magnified by their masks, got even wider as they got close to animals they’d only seen on television or in aquariums.

A short walk past Aulani’s neighbor, the Four Seasons hotel, is Lanikuhonua, an ancient vacation spot for royalty. The island’s oldest resident, Aunty Nettie, lives there and was kind enough to bless us in an ocean ceremony. The Four Seasons offers its guests various adventures, including guided hikes to Ka’ena Point, 30 minutes away. Swimming holes and a teardrop-shaped rock called Leinakauhane Point – where islanders believe souls transition to the afterlife – is the payoff.

On our last day in Ko Olina, we made use of the Aulani’s complimentary stand-up paddle boards and hit the ocean. Seven-year-old Knox rode with me and 9-year-old Kaleb with Howard. Knox and I rocked on the gentle swell as I used the oar to paddle us toward the lava rocks hugging the cove. We could see red, yellow and blue fish swimming around our board. Knox pulled his snorkel mask over his face and jumped in to get closer. I jumped in after him to see the streamers of eels and clownfish floating around coral reef and the spears of sunshine cutting through baby blue water. Afterward, Knox paddled us around the protected beach until we caught up to his big brother and dad. We raced each other to the other end of the cove, then jumped into the water to cool off. 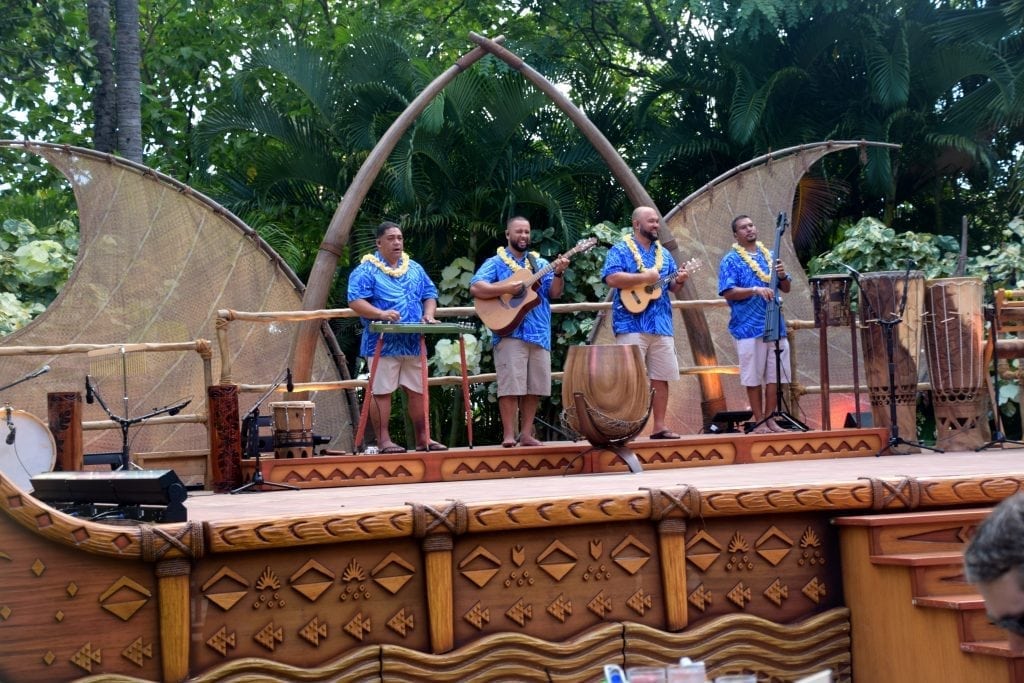 Our island adventure ended at Aulani’s Ka Wa’a (canoe) Luau. Aunties and uncles welcomed us with keepsake leis of Kakui nuts and tiny moss-colored Mongo seashells. The boys received demi-god Maui fish hooks. Island warriors helped prepare the feast by showing the kids how to pound pasty poi, then guided them in lei-making, applied tribal tattoos (temporary, of course) and taught hula dancing before setting out the mounds of pig, fish and salads. The meal was followed by stories and fire dancing that conveyed the story of the Polynesian people’s migration by canoe from Tahiti to Hawaii, and the culture’s evolution to the present. Having loved our taste of that culture during our time on Oahu, we’ll definitely be back.

Rina Baraz Nehdar is an L.A.-based writer and a frequent contributor to L.A. Parent.  She loves to write about the adventures she has with her husband and three sons.