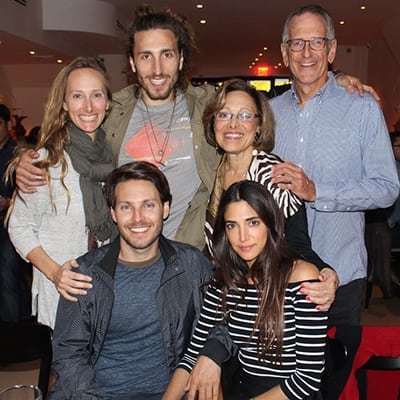 Author Margot Machol Bisnow defines entrepreneurs not just as business owners but also as musicians who put together a band, actors who organize their own careers and activists working to create a better world. As a way to explore that spirit of resiliency, outside-the-box thinking and innovation, Bisnow interviewed 60 successful entrepreneurs and their moms to discover the parenting style that helped foster these confident and creative entrepreneurs.

The result is her recently published book, “Raising an Entrepreneur.” And the mom of two and former federal trade commissioner and chief of staff of the President’s Council of Economic Advisers says that the “secret of all secrets” she uncovered is moms who truly believed in their children.

These are moms like Glenda Chasen, who often heard that she was allowing her son, Michael, to waste his life playing with his computers. Michael eventually built online educational company Blackboard and later sold it for $1.5 billion. Acclaimed songwriter Benny Blanco’s mom fielded complaints from his kindergarten teacher that he wouldn’t sit in the reading circle, and the book includes anecdotes about their moms from such innovators as TOMS Shoes founder Blake Mycoskie, YouTube CEO Susan Wojcicki and Under Armour founder Kevin Plank. I recently chatted with Bisnow about what she has learned about raising children who are problem-solvers and determined to follow their hearts.

Were there any surprises during your research?

Everything surprised me! I realized there is no one way to be a great family. There are a million ways. I used to think that there were certain rules to follow to create a supportive family environment, but my research showed me that a single, narrow path does not exist. Another surprise: Not all successful entrepreneurs were successful students. Some breezed through Ivy League schools, but there are plenty of others who did not excel in traditional school settings.

How would you describe the moms you interviewed?

They saw their kids for who they were. They accepted them and celebrated their passions and interests. They saw what gave their child joy and they supported and nurtured that. I was really humbled by talking to these moms.

Don’t all parents support their children?

We like to think so. We love our children and we want what’s best for them. But what we think is best for them might not be what’s in their heart. How many times do we hear parents tell their kids, “How will you make a living with that major?” We want our kids to be successful and we assume that means getting good grades, going to the right college and having a particular career. But parents of successful entrepreneurs continue to support their kids even when they decide to leave their six-figure investment job to design T-shirts.

Did you find any commonality among the entrepreneurs you interviewed?

They did not worry about losing. Many competed at a high level growing up, whether in sports, the debate team, art, music or student government. Whatever their passion was, they pushed themselves to the highest level. When you work hard at something, you learn a lot through the process. You learn to persevere. You learn that you don’t always win, but you can come back and try again. You learn to work with other people and you get comfortable putting yourself out there.

What have you learned about the entrepreneurial spirit while working on this book?

That we all can benefit from it. This wonderful sense of confidence and independence is something we should nurture in all children. You can do this by believing in your kids. Help them find their true passion, allow them to discover new ways to solve problems, encourage them to not be afraid of failure and setbacks and urge them to take on challenges.