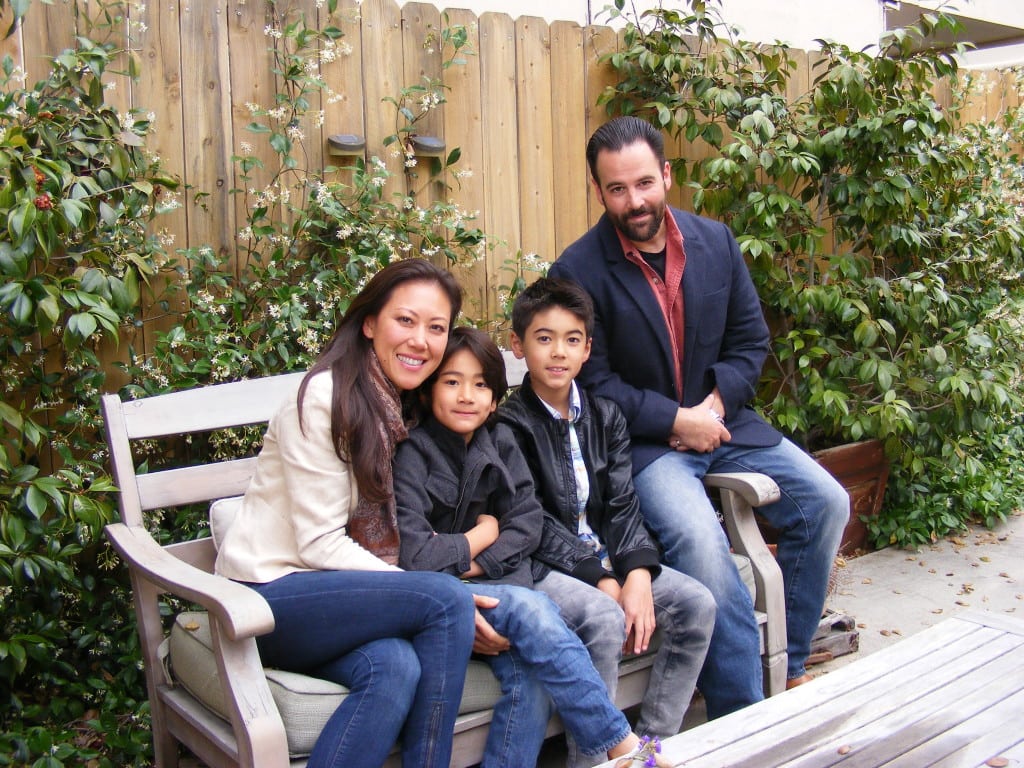 Chanel Boutakidis, at left, with sons Athan and Nik and husband, Ioakim. PHOTO BY CHRISTINA ELSTON

Each of Chanel and Ioakim Boutakidis’ two sons had a traditional Chinese Red Egg and Ginger party to mark his first month of life. Each also had a Greek Orthodox baptism, in Greece, before he turned 2. In the Boutakidis’ Altadena home, there is always a pot of rice on the stove and cucumber-and-tomato salad in the refrigerator. Their large extended family gathers for Chinese New Year and Greek Easter.

Chanel, CEO of the nonprofit child advocacy organization Five Acres, was born in Taiwan and came to the U.S. with her family at age 5. Ioakim, associate professor of Child and Adolescent Studies and associate dean of Student Success in the College of Health and Human Development at Cal State Fullerton, was born in the U.S. to first-generation Greek immigrant parents. The two met in graduate school at Cal State Northridge. Married since 2002, they are raising their two boys, ages 9 and 7, in a household rich with traditions from their native countries.

“When our sons were younger, we did talk about if we wanted to raise our kids with two different cultures,” says Chanel. “We could either try to bring our traditions together or we could do none of it. We thought, sure, life would be a lot simpler without incorporating all the customs and rituals. But it would also be really dry. We decided to let our kids experience it all.”

In this respect, the Boutakidis family is far from unique. Throughout Los Angeles, couples made up of first-generation immigrants and the children of immigrants are linking cultures from Iran, Thailand, Cambodia, Puerto Rico, Cuba, Philippines, Sri Lanka, Japan, China, Mexico and many others.

Parenthood for these multicultural couples brings up questions of race, culture, language and religion – all factors that will become part of their children’s developing identities. How and when should they introduce their heritage to their children? Should they speak their native language or opt for an English-only household? How will they observe holidays and each culture’s rituals and customs? There is also the larger question of how society will treat their children, and the inevitable question all children of mixed culture will face at some point: What are you? 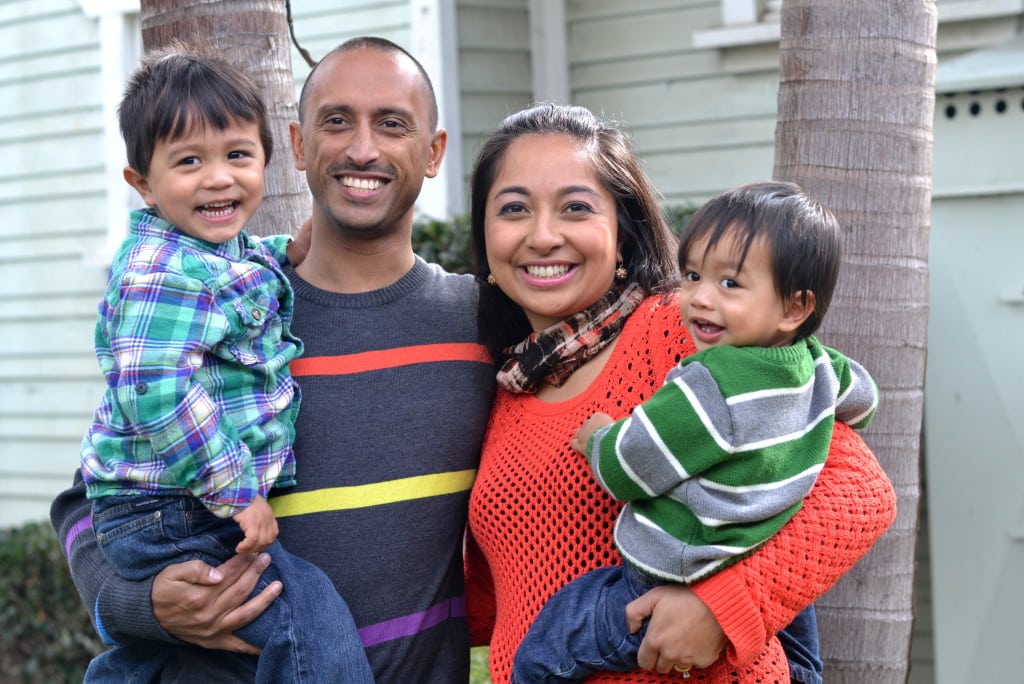 “People are curious, especially kids, so they will ask that question,” says Sonia Kang, who is Latina and African American and has four children with her Korean husband. “We do a lot of talking and educating in our house.”

Kang, who was a pediatric critical-care nurse until 2007, has become a spokeswoman and advocate for multiracial and multicultural community. Her company, Mixed-Up Clothing, is a children’s clothing brand featuring ethnically diverse styles, which she uses as a vehicle to educate and create broader awareness. As a writer for the Mixed Up Blog and vice president of Multiracial Americans of Southern California, Kang has shared her story extensively.

Many multicultural couples say they feel lucky to live in Los Angeles, a city brimming with diversity. But even against the backdrop of a unique canvas that minimizes the sense of being different, kids can feel conflicted about their heritage and wonder where they fit in. Talking about these issues is key.

“You want to create a positive environment for your kids, so they can feel good about themselves,” says Farzana Nayani, who is Filipina and Pakistani and has two kids with her Malaysian-German husband. “I want our kids to express every part of themselves. They can be more than one box to check on a questionnaire.” 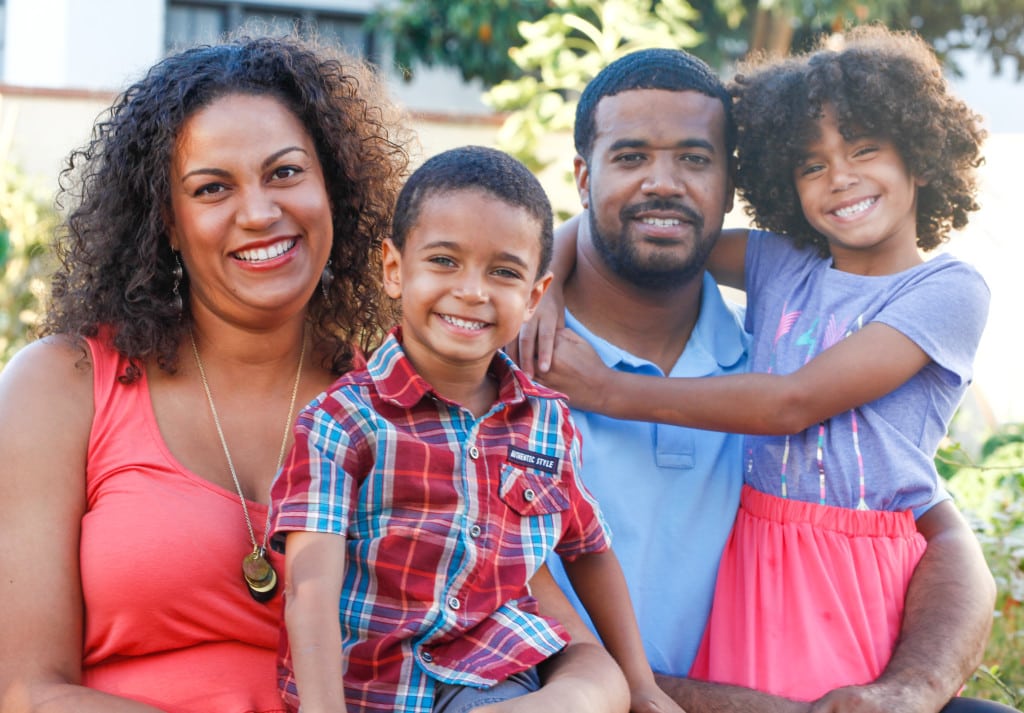 Nayani has served as president of Multiracial Americans of Southern California for four years and is working on a handbook for parents and teachers on raising children in a multicultural home. “People sometimes shy away from addressing diversity,” she says, “but it’s important to start the conversation early.”

Some children from multicultural families will face stares, whispers and unkind words. Parents can help bolster their sense of self through open communication about race and culture, and by addressing natural curiosity about skin color, hair texture and facial features.

“My daughter has asked, ‘How come Grandma’s skin is peach and Grandpa’s skin is brown?’” says Rebecca Bernard Aguiar, whose mom has Dutch-German roots and whose father is Costa Rican with an Afro-Latin background. “These are great moments to talk about our differences.”

Bernard Aguiar – whose childhood memories include canning farm-fresh vegetables with her mom’s family in Kansas and dancing to salsa music while visiting her dad’s family in Costa Rica – recalls her own coming-of-age identity questions. “I think we all go through moments of questioning where we belong,” she says. “But, as you get older, you realize how fluid you are in crossing cultures. You realize that this is a gift.”

Bernard Aguiar co-founded a preschool in L.A.’s West Adams neighborhood, rooted in her own global childhood experience. The World City Center is a dual-language preschool offering camps and after-school programs focused on raising global citizens. “Our mission is to teach kids to appreciate and celebrate all the beautiful things that make us different,” she says.

It’s important for parents to remember that children may identify with different parts of their heritage at different stages of development, or even in different settings. “Many people think that when you blend two cultures, you’ll have a child who is a hybrid,” says Ioakim Boutakidis, whose research focuses on at-risk minority youth and how cultural diversity affects parenting styles and child outcomes. “But, according to the research, these kids become experts at cultural frame-switching. They are very adaptable. I see it in my own boys. They’re able to deploy the tools they have in the Greek culture, in the Chinese culture and in the American culture.”

As Kang says, many children of multicultural families become “young ambassadors.” “It’s so cool to watch these kids talk about their culture with other kids or at school,” says Kang. “When you instill a sense of worth and pride in different cultures, your kids will carry that on.”

A Sense of Tradition 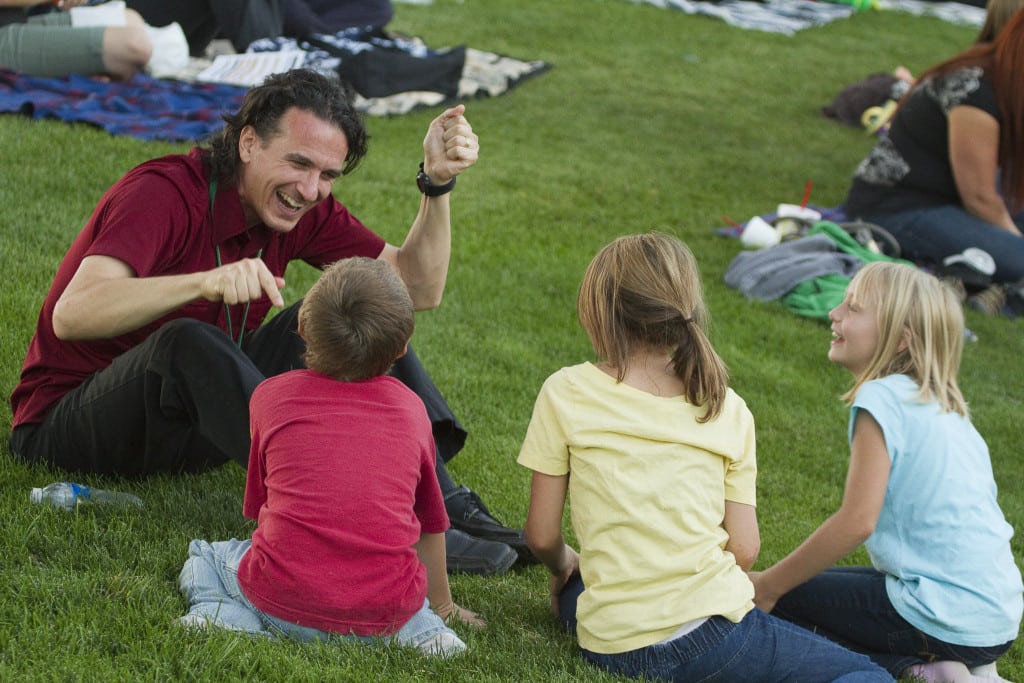 Parents can help instill that sense of pride by respecting, celebrating and upholding the collage of traditions of their childhood.

Once a week, Antonio Sacre makes a pot of his grandmother’s black beans, filling his kitchen with the savory smells of Cuban spices that instantly take him back to childhood summers spent in Miami’s Little Havana.

Sacre, a bilingual author, performer and storyteller, grew up in a predominately Caucasian suburb of Delaware with his Cuban father and Irish-American mother. Being the only Latino in school prompted Sacre to abandon his Spanish language skills and to insist on being called “Tony.”

“My dad’s nickname for me was ‘Papito,’ so the other kids would call me ‘Tostito’ or ‘Dorito.’ I felt conflicted and ashamed,” says Sacre. “I didn’t want to stand out. I wanted to be like everyone else.”

But summers he spent at his grandmother’s house in Miami left an indelible mark on Sacre. Daily trips to the corner store, picking avocados and mangos from backyard trees and watching Spanish soap operas with his grandmother contributed to Sacre’s desire to relearn Spanish and embrace the beauty of his heritage. During those humid summer days, neighbors, friends and relatives gathered in his grandmother’s house for lunch. There was a flurry of chopping, washing, gossiping and laughing. After the meal, everyone stayed and talked. The love, noise, family and community connections – and those funny stories – stayed with Sacre.

Many of his stories come from those summers in Miami. Now a father of two, he speaks Spanish to his kids, cooks his grandmother’s beans and shares his family’s stories, not only with his own kids, but with children around the world. The family also embrace’s Sacre’s wife’s Italian and Scottish heritage. “My wife cooks her grandmother’s pasta sauce and has taught the kids about Scottish tea ritual,” he says. “I encourage all parents to share their stories with their kids. There is great strength in these cultures, in these stories.”

As these couples parent their American children while enriching their lives with traditions from around the world, they want to remind other multicultural couples to be gentle with themselves.

“None of us have a manual,” says Bernard Aguiar. “Relax and do what makes you happy. Create the traditions and family experience you want to have.”