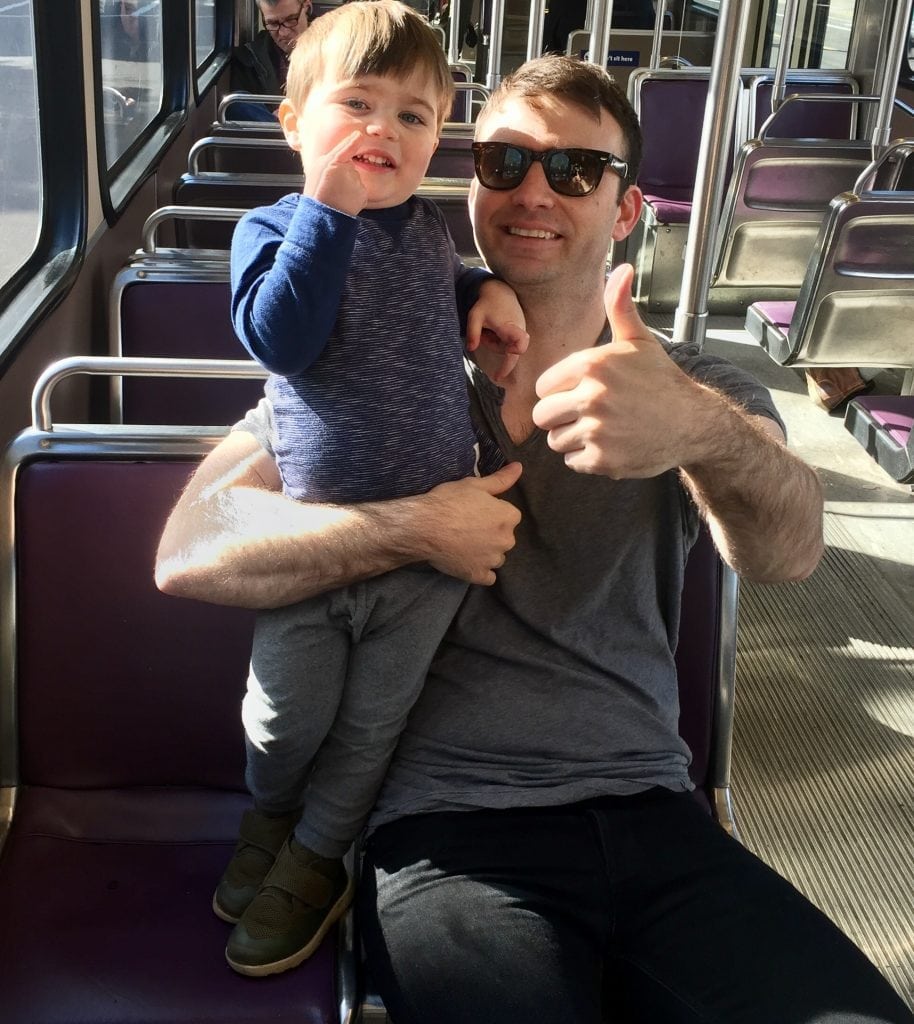 I am sitting with Hank in a Nippon Sharyo (which literally means Japanese vehicle) cab, model P865. This pantographed workhorse – a Los Angeles Metro train with a electric-current-collector on top – is here because of years of painstaking negotiations and political savvy, an effort by L.A. officials to create a more attractive cityscape while simultaneously curbing carbon emissions and alleviating traffic congestion.

I have fantasized about a train connecting the Westside and eastside since I was a lad. My dad and I often lamented the absurd Purple Line, the original Westside extension that will take you and your child all 13 miles from Downtown to Western Avenue. Now that I am a dad, the extension of the Expo Line makes this connection is a reality – especially for this 2-year-old sitting next to me.

Hank has been in a train phase since year 1. I’m excited, too, about the challenge of creating a perfect L.A. day without the ubiquitous personal car. We took an Uber (I’ll get to that later) to the Bundy/Expo Metro Station and headed east.

Could this be the end of the SUV-driving soccer mom/dad as we know it? I bounce this half-baked thought off Hank as I’m people-watching eco-commuters and trolley-fare dodgers. Another thought: Our baseball team has an appropriate name again! (In 1958, when the Dodgers moved from Brooklyn to Los Angeles, some of the Pacific Electric Red Car trolleys were still in operation, but those were gone by the late 1960s.)

We hop off at Exposition Park after a respectable 25-minute trip that yielded a nice survey of bitter Cheviot Hills residents, Culver City scenesters and barred South L.A. windows. Hank’s blue eyes have been growing wider by the mile and get wider still when he spots the flower gardens and playgrounds outside of the Natural History Museum. The flowers are looking healthy, as does the attendance. We visit the NHM’s Dinosaur Hall and the Space Shuttle Endeavor at the nearby California Science Center – perfect because I get a chance to tell Hank my Dinosaur-Astronaut theory. “That’s ridiculous!” he says.

It’s called a Kinko Sharyo, a P3010 to be exact, and it is the Gold Line carriage Hank and I ride – after a jaunt on the Red Line – as we continue our eastward excursion and head through Little Tokyo. That it is another Japanese import seems appropriate as we gaze on clusters of Asian markets and conveyer-belt sushi bars. But what is this working, convenient – dare I say, clean? – P3010 doing in the heart of L.A.?

As the haze breaks free on this early L.A. p.m., I do eventually recognize this as my hometown, not some quantum leap halfway around the world. The scenery cuts from sushi stops to hipster-gentry hangouts to the more recognizable potpourri of panaderias and strip-mall taquerias. I catch a glimpse of the lofty tower of Los Angeles County USC Medical Center and whisper to Hank, “You know, Dad was born over there.” He is just too excited and restless (and 2) to respond. Next I say, “When I was your age, this is where I lived. It’s called Boyle Heights.” He says, “That’s ridiculous!”

It kind of is, but I still plan on buying him a taco.

The Gold Line has been running for 14 years and has become an important part of the recent ascent of the once-invisible “Far East.” Something here on the eastside feels more like a city than a sprawling basin of neighborhoods.

Alternative transportation might very well become the norm one day, and my generation in particular shoulders the blame and credit. As rents and housing prices go up, perhaps more parents will ponder whether their personal automobiles are necessary. When I was growing up, just about every affluent kiddo’s parent had the prerequisite SUV. But times have changed. If you feel inclined to meet aspiring actors in L.A. while you drop your kids off at volleyball in an Uber, that’s a thing now. And If you prefer Lyft’s politics, there’s a car outside with a pink mustache waiting to take you and your kid to his drum lesson.

Lyft and Uber won’t take your babies without you, but UberX has a carseat option. Plus, the local startup HopSkipDrive is offering a kids-only rideshare service that connects fellow moms and nannies who somehow have time to take your squirt to taekwondo.

Hank and I retrace our steps after some tacos at Al & Bea’s Mexican Food and hop back on the Gold Line. Westward we go and transit to the Expo, the golden sun hitting our faces for 45 minutes. Our Uber-X is ordered. We climb in the back. Hank passes out, but not before I ask him, “Would you wanna take the train again?” He says, “No! That was ridiculous.”