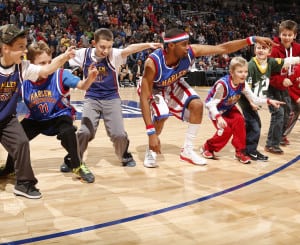 Southern California sports fans know about rivalries. There’s the Dodgers vs. the Giants, UCLA vs. USC and the Lakers vs. the Celtics. But few sports rivalries can match that of the Harlem Globetrotters and the Washington Generals. While the Globetrotters are world famous, the Generals are their longtime, downtrodden opponents. For decades, the Generals played against the popular Globetrotters, losing tens of thousands of games and winning an estimated six. This season, the two teams are renewing their rivalry at some great Los Angeles events during the “Washington Generals’ Revenge World Tour.”

Although the Generals get billed in the tour’s name, the Globetrotters remain the stars of the show. The legendary team is known for lively basketball skills and even more lively showmanship, but reveals a more serious side with the “Hometown Hero” program. At each game played in North America, the Globetrotters will honor an active, wounded or retired member of the military who has been nominated by the community.

This month the Globetrotters will play eight games at six Southern California venues. They’ll start off Feb. 6 at Ontario’s Citizen Business Bank Arena and play the next afternoon at USC’s Galen Center. On Feb. 9, they will be at the Saddleback Gym in Mission Viejo. They return Feb. 14 for two games at the Honda Center followed by a pair of games at Staples Center Feb. 15 before wrapping up their visit back at Honda Center Feb. 16.