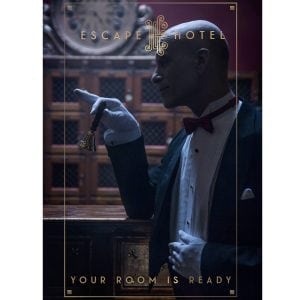 You’ve probably heard friends talking about the new Escape Room craze where you and a handful of fellow sleuths are locked in a room, left to your own devices to crack codes, riddles and puzzles to escape the room in one hour or less.

I experienced my first Escape Room a couple months ago, and much like my childhood friend, Nancy Drew, I’ve become hooked on solving mysteries and jump at any opportunity to test my smarts. There aren’t a lot of Los Angeles attractions for adults that bring out the kid, the brainiac and scaredy cat in you, all at the same time. So when I heard about Escape Hotel Hollywood, I assembled the team for another thrilling adventure.

We “checked in” to the 1930s-themed hotel on the corner of Hollywood Boulevard and North Cherokee Avenue in the heart of Hollywood and were greeted by a macabre cast of zombie-like hosts and game masters. They really set the stage for things to come. Be aware that upon check in, you’ll have to leave everything in a secure locker. Absolutely no personal belongings are allowed in the room, which means no phones … or flashlights.

We were escorted into our room, an abandoned post-apocalyptic zombie lab, where we scurried to find clues that would lead us to freedom. The adrenaline was flowing and our critical thinking skills were in overdrive, but we were down two players that night and lacked the required brainpower. We raced against the clock – and lost.

When our game master unlocked our door, she showed us how to solve the remaining puzzles. Surprisingly, neither of us felt deflated, but rather energized for our next try. We’ll definitely be back.

Escape Hotel Hollywood has five themed escape rooms: Daycare, Zombie, Mafia, Agent and Witchcraft, with more to come at a later date. Each room has a set capacity (typically six or eight people) and guests can purchase individual tickets or have a private experience and buy out the room. My advice to the novice escape room player? The more brains, the better.