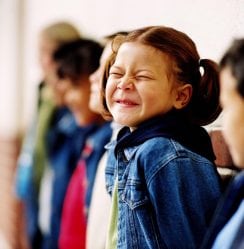 Transitions can cause tremendous anxiety for a child with special needs. Often, it is not the new place itself that may illicit fear in children living with AD/HD, OCD, sensory processing disorder, or autism. Instead, it is the potential for sensory or social-emotional elements that could cause them to feel out of control that causes the fear.

I like to call this “Rehearsing for Life” or “Practice Makes Progress!”

With a little rehearsing, even the most challenging situations can be transitioned without fear.

I recall one evening when my student, Sloan, who had long overcome her fears of social groups and was usually smiling, friendly and joyous, came to class clearly upset. She didn’t want to participate in any of the activities, and sat by herself tightly grasping her American Girl doll. Rachel, one of our teen volunteers joined her and discovered that Sloan was anxious about a fire drill scheduled to occur the next day at school.  We immediately discarded the original lesson planned for the evening and gathered all the students together to discuss fire drills.

“Has anyone ever been afraid of a fire drill?” I asked. Several hands rose.

Immediately, Sloan felt calmer knowing that she was not alone in her fears.

The students (all with special needs of their own) offered suggestions to Sloan, such as bringing ear plugs, asking the teacher if she can carry her doll with her, letting a friend know that she is scared, etc. Since this was The Miracle Project theater class, we choose to dramatize a fire drill and then play act a real fire! Some kids became firefighters, others pretended to be trapped in the burning building, some acted as the fire, itself, blazing around the building while the fire fighters used imaginary hoses to quench the flames. A group of kids exited the pretend building and waited for the principal to motion that the fire was out and it was safe to return to class.

We discussed how fire drills aren’t real and are just practicing in case of a real fire, just like we just practiced putting out our imaginary fire. We all then acted out a fire drill, exiting the real building where our class was held and lining up outside. We returned and wrote a song together for Sloan to hum the next day in school:

“It’s only pretend, there is no fire. I’m your friend and I’ll be right behind ya.”

The next week, Sloan bounced into The Miracle Project all smiles. When Rachel asked her about the fire drill, she beamed, “I wasn’t scared! I wasn’t scared at all!”

The kids all cheered.

Key 1: Set your intention to be curious. Uncover the root of the fear of the new activity.

Key 2: Accept the fear as natural. Instead of saying, “Don’t be afraid,” explore the feelings and find others who may have had them, too. Practice calming techniques such as deep breathing to help ease anxiety.

Key 3: Examine the sensory elements that might be causing the fear. Offer strategies such as wearing head phones if your child is sound sensitive, carrying a squeezy toy to decrease stress, or singing a comforting song, to help deal with the potential sensory assault .

Key 4: Take photos of a new environment or look on the internet for visuals of new places and events.

Key 7: Celebrate your child’s courage for attempting to do something new at every opportunity. This builds competence that carries over into all environments. Just as Sloan, with the help of her friends, overcame her fear of fire drills; your child, too, will begin to know that you are an ally and together you can do anything!

Elaine Hall is a thought leader; motivational speaker; inclusion activist; founder of The Miracle Project, profiled in the HBO film, Autism: The Musical; author of Now I See the Moon (HarperCollins) and 7 Keys to Unlock Autism (Wiley); and creator of an arts enrichment and religious education program at Vista Del Mar Child and Family Services.