Anyone who has experienced life with a newborn knows how hard those first few months can be, especially if you don’t have family or friends nearby. I remember feeling lost in a fog during those early days. Desperate for community and answers, I turned to the web, but that proved even more overwhelming. At a certain point, I decided to stop googling. Instead, I relied on the advice I received from my mom and friends. And yet, even with this support, I felt like I could have used a “village.” My mom lives far away and my friends who were also experiencing early motherhood had left L.A.

The Village, a community of support for new moms founded by three women during the pandemic, understands just how overwhelming new motherhood can be for some parents. Co-founders Christy Tabit Evans, Amira Samuel and Sarah Croce have made it their mission to support moms in need with practical resources such as meal kits, diapers and laundry services in addition to funds for birthing classes, doula services, babysitters and more. Christy is an Ob/Gyn and mom, Amira is a mom and former attorney supporting women pursuing justice, and Sarah is a birth doula working toward her masters in Nurse Midwifery.

During the pandemic The Village hosted two virtual fundraisers, which allowed them to provide five grants to moms in need. Their first in-person event kicks off later this month with the inaugural annual Stroller Stride on Sept. 26. The fundraising event will feature a 2.6 km walk along the beach in Santa Monica. A reception with refreshments from Primo Passo Coffee and Pressed Juicery, and a raffle with prizes like a 60-minute massage, $100 floral arrangement, a stroller and more, will follow the walk. L.A. Parent is a proud sponsor of the event, along with The Pump Station in Santa Monica. Through this event and future in-person fundraising events, The Village hopes to raise enough funds for all birthing people applying for support.

Stroller Stride will take place Sept. 26, starting at Bay St. in Santa Monica and ending at the North Beach Playground. For more events from The Village check out their events page.

Samantha Kurtzman-Counter co-founded The Mother Company, which produces the “Ruby’s Studio” books, apps, shows and activities, after her son Jack was born. 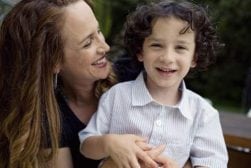 Samantha Kurtzman-Counter was enjoying a successful career as a television and film producer and director when she became a mom. “I thought I would return to work within three weeks of having my son,” she says. “But, once Jack was born, I quickly realized I was lucky if I had a chance to wash my hair.”

She took a couple of years off work and then teamed up with an old high school friend, former TV executive Abbie Schiller, to start The Mother Company, which produces the award-winning “Ruby’s Studio” series of books, apps, shows and activities.

The three-year-old company’s mission, “to help parents raise good people,” is evident in the titles of their products, which focus on children’s social and emotional issues: “The Feelings Show,” “A Little Book About Friendship,” “Sally Simon Simmons’ Super Frustrating Day,” and “Casey Caterpillar Feels Left Out.” I recently chatted with Kurtzman-Counter about the company’s latest release, “The Safety Show,” shaped with the help of children’s safety expert Pattie Fitzgerald of Safely Ever After Inc.

Tell us about the mission behind “The Safety Show.”

We wanted to create something that was engaging and fun for kids and parents to watch together that would empower them to talk about scary situations without the ick factor. Often times, parents want to talk about safety, but they’re not sure how to without causing fear in their kids.

How can parents help their children feel empowered when it comes to safety?

The most important thing we can do for our kids is give them the language and the concept of trusting their own feelings. We have to allow our kids to honor their gut feelings. If they’re not comfortable participating in an activity they’re not sure about, or hugging someone, that’s OK.  In “The Safety Show,” we talk about trusting your “uh-oh feelings.”

One of the hardest topics for parents to talk about is inappropriate touching. How do you address that topic in the show?

We want to give kids as young as 2 or 3 years old a simple phrase they can understand and use. “I’m the boss of my body,” is used throughout the show and we also produced a music video just on this topic. It’s so important for kids to know from an early age that no one – not another child, not an adult, even an adult they know – should touch them in a way that makes them uncomfortable. We often tell our kids to not talk to strangers or go anywhere with a stranger. But, the reality is, 90 percent of child abuse occurs by someone the child knows. That’s why it’s so important to allow our children to trust that “uh-oh” feeling.

For more information on The Mother Company, visit www.themotherco.com.