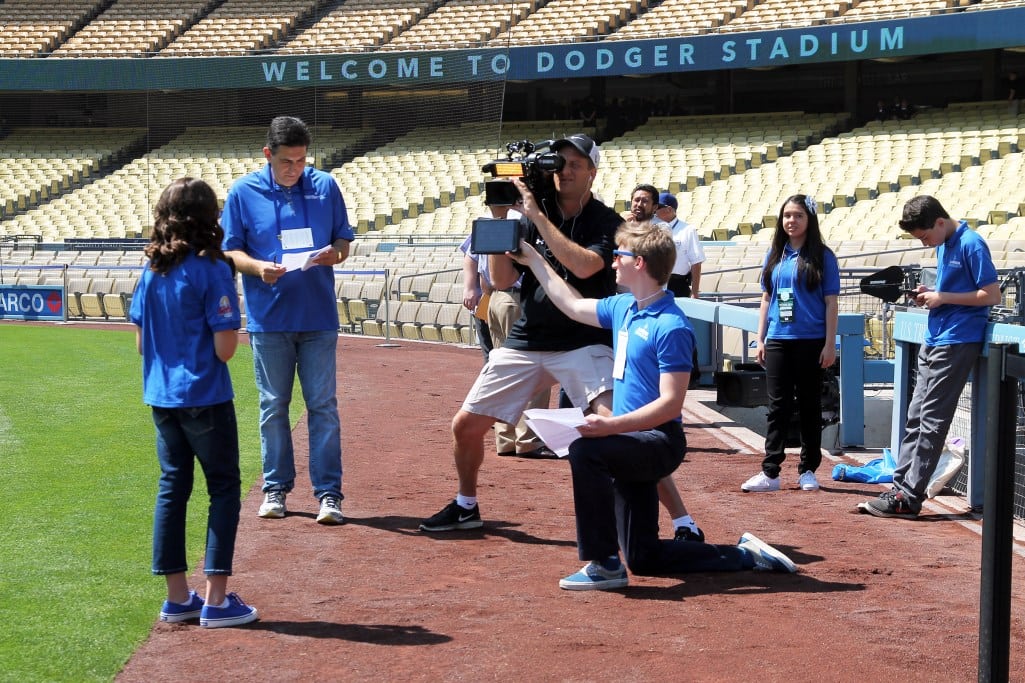 Jr. Dodger Broadcasters are treated like all other membes of the media. PHOTOS BY RHONA BLAKER

If your son or daughter is a baseball fan, the Jr. Dodgers Broadcast program could put them in the middle of a field of dreams.

Kids in the program, ages 8-14, broadcast Sunday home games over the Internet at www.dodgers.com and are treated like every other member of the media. That means they must arrive several hours before the first pitch to do their prep work and conduct interviews with players and coaches, and review game-day notes about the Dodgers and the visiting team to share with listeners.

Their broadcast booth is on the Loge level behind home plate – one level below where Vin Scully, Charley Steiner and Rick Monday sit to call the game in English on Fox Sports LA 570 AM, and Jaime Jarrín, Pepe Yñiguez and Fernando Valenzuela call it in Spanish on KTNQ 1020 AM. For most games, there are three kids at the microphone – one doing play-by-play and two chiming in with commentary on a particular play, player or even a pitch – and a fourth who produces the broadcasts. 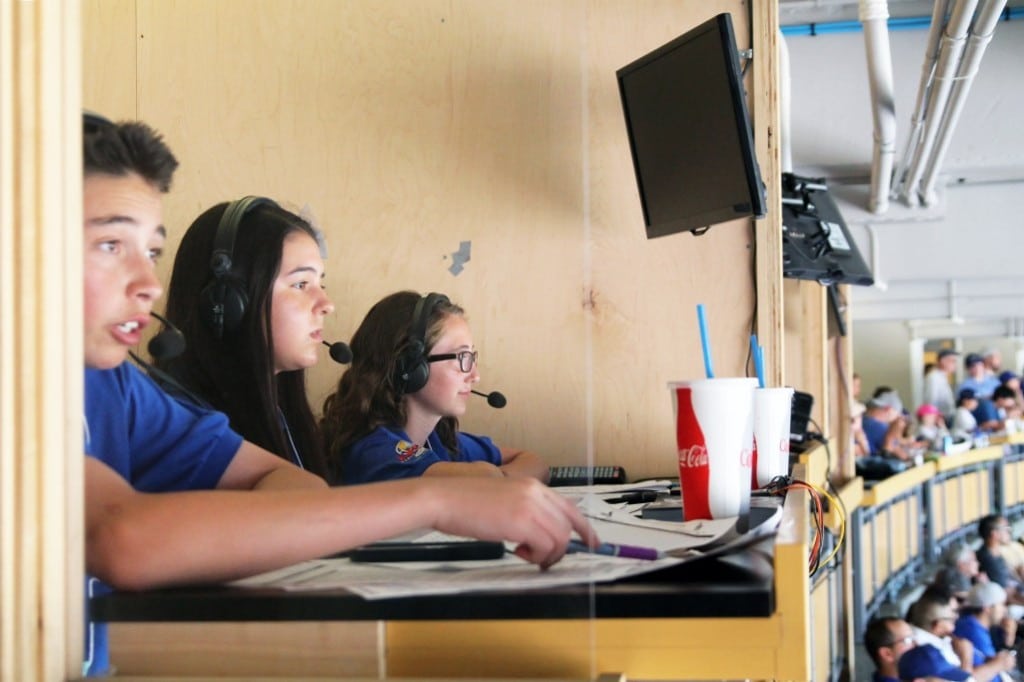 In the booth, and during pre- and post-game interviews in the dugout and on the field, the Jr. Broadcasters get to share their love of the game and garner experience that many professional broadcasters didn’t have as they began their careers.

“Geez, I wish I had a chance to do that,” says Steiner, who is in his 10th season with the Dodgers, having worked previously for ESPN and the New York Yankees. “It’s a wonderful and remarkable experience. What I would have given to have that opportunity.”

Steiner and colleagues throughout the broadcasting industry often start in small markets to gain experience, putting in years and years of work before getting a chance at a job with a high-profile college or professional team. Among the places Steiner has worked are Peoria, Ill., and Davenport, Iowa, so to start with the Dodgers, even as a child, is special.

Of course, that’s the beauty of the program, says Dodgers Vice President of Marketing and Broadcasting Erik Braverman, who in 2009 was looking for ways to better engage women and children at the games and came up with the Jr. Dodgers Broadcast program based on personal experience.

“I was lucky enough to get an internship at a radio station when I was 15 years old,” says Braverman, “and I told myself that if I was ever in a position to help kids in that way, I was going to do it. This program combines my two passions – marketing and broadcasting – along with baseball, and I’ve seen how it affects these kids.”

Braverman points out that one Jr. Broadcaster, Jake Reiner, went on to pursue a degree in journalism at Syracuse University, and another, David Gottlieb, has stayed with the program as a producer, learning even more about the industry. 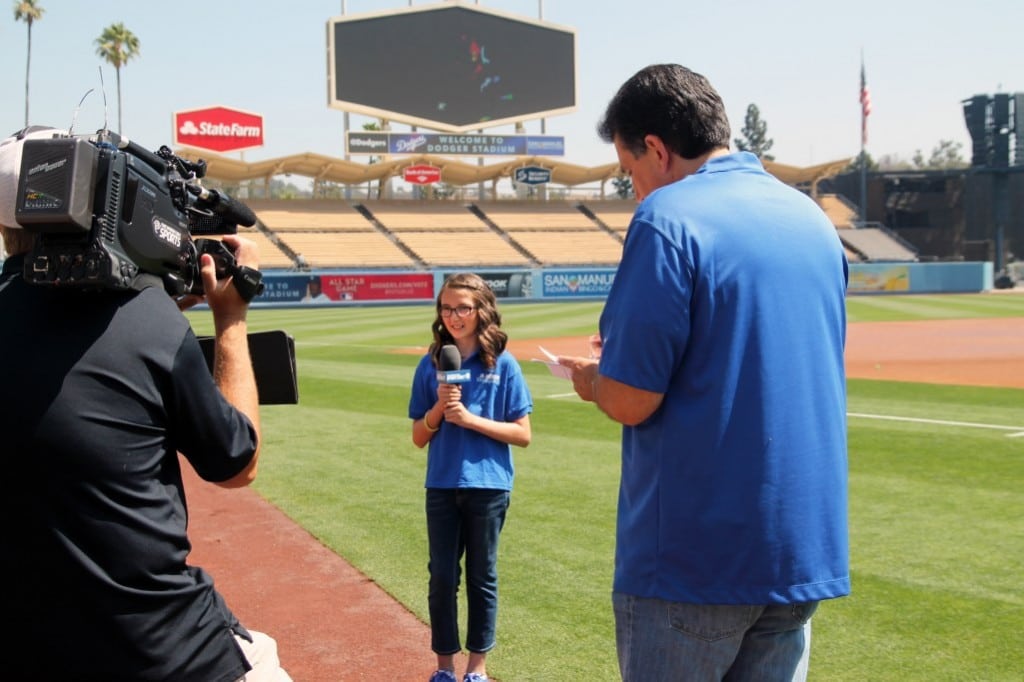 “I didn’t want this to be where they were treated liked kids,” Braverman says. “I want them to get the experience of what [the job is] really like.”

The Dodgers partner with Kidstar Radio Corp. to handle the operational side of the program, and Kidstar President Cornelius Hanna is at Dodger Stadium on Sundays, ensuring that his broadcasters are professional in every aspect – from their attire to their pre-game preparation.

Hanna is quick to point out that while the on-the-field and behind-the-mic experience is great, the real benefit for the participants is the self-confidence they develop through working in a professional atmosphere, learning from the pros and realizing that they have the skills do this.

“It’s a great program,” Hanna says. “We’ve had upwards of 100 kids come through it here with the Dodgers.”

Hanna’s Kidstar (www.kidstar.org) is a nonprofit dedicated to advancing kids’ education, building their character and helping instill a solid value system. It has similar broadcasting arrangements with other professional teams – including the L.A. KISS arena football team as well as non-sports programing, mainly in California and Arizona.

Max Ferregur, a 13-year-old from Sequoia Middle School in Newbury Park who provided commentary during a recent Dodger game broadcast, said the value of the program, and the opportunity, is not lost on him. But his favorite part of the experience?

“Meeting and talking to the players, and being part of the broadcast,” he says with a smile.

Which is right in line with the advice Steiner, who was elected to the National Radio Hall of Fame last year, would offer to all the Jr. Broadcasters.

Participation in the Jr. Dodgers Broadcast program is free and requires a minimum two-week commitment. Sign up at www.dodgers.com.

Ron Epstein is publisher of L.A. Parent, and the father of two Dodger fans. 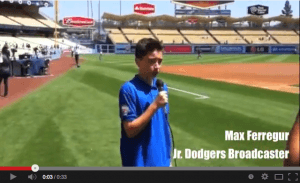