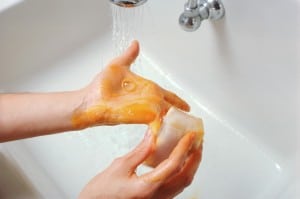 Did you wash your hands?

You’ve asked your child hundreds of times, but how about your child’s doctor? If you didn’t see the pediatrician lather up before examining your son or daughter, you should speak up, says James E. Stein, M.D., chief quality medical officer at Children’s Hospital Los Angeles.

Doctors, nurses and other healthcare providers should wash their hands – or use alcohol-based hand sanitizer – in the exam room immediately before touching the patient. “Your hands, once you’ve cleaned them, shouldn’t touch anything other than the patient,” Stein says. Doctors who wash outside the exam room risk bringing in germs from another source, including the door handle.

And one scrub isn’t enough. A doctor or nurse who leaves the exam room, maybe to get supplies, needs to wash before leaving and again after returning. “Our hope is that the entire environment is largely clean between patients,” says Stein, but there is no way to know who else might have been touching those surfaces, and whether they washed first.

Even if the doctor or nurse is wearing gloves, she or he still needs to wash. “Gloves are an added protection more to the healthcare provider,” says Stein, explaining that gloves serve as a barrier against bodily fluids. They should be changed between patients and not taken outside the exam room. “I think people forget sometimes, when they’re wearing gloves, that they’re not the ultimate protection,” he says.

In 2009, a 12-month study in the American Journal of Medical Quality reported the rate of hand washing in U.S. healthcare settings was a mere 36 percent, and Stein says the issue of hand hygiene came to prominence during the past five to 10 years as the number of patients falling ill from infections they acquired in hospitals and other healthcare settings began to spike. Hand hygiene rates have been improving as healthcare settings have targeted it as a way of bringing infection rates down. During the study, an aggressive awareness campaign increased rates to 51 percent.

CHLA uses an interactive patient-education program called GetWellNetwork to help families receiving in-patient care learn about a number of health topics, including teaching them to speak up if they notice that a healthcare worker fails to wash her or his hands. The hospital also provides frequent feedback to staff to help keep hand hygiene top of mind.

A person’s risk of contracting a healthcare-acquired infection really depends on their condition. Patients on ventilators, with catheters or who have just had surgery are some of the most vulnerable. But as hospitals and other healthcare facilities focus on this, rates of these infections have been dropping, according to Stein.

Still, anyone could be vulnerable to germs transmitted by a doctor’s unwashed hands. And with the issue now so prominent in healthcare circles, Stein says he doesn’t believe most healthcare providers would bristle at a little reminder: “I’m sorry. I didn’t see you washing your hands, and it would just make me more comfortable to know that happened.”