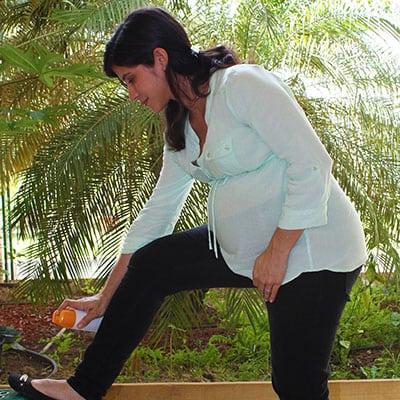 A pregnant woman applies mosquito repellant to the instep of her right foot, protecting the exposed skin against a mosquito bite, and her unborn child against Zika virus. Covering exposed skin is also recommended. PHOTO COURTESY CDC/DIVISION OF VECTOR-BORNE DISEASES

Since the first reports of a potential link between infection with the mosquito-borne Zika virus in pregnant women and severe birth defects in their babies, the media has been buzzing with updates.

Zika infections have been connected with cases of microcephaly, a birth defect that causes a baby’s head and brain to be underdeveloped. L.A. County’s first case of Zika was in an adolescent girl, who was infected on a trip to El Salvador in late November and has recovered. Health officials say L.A. County could eventually see locally transmitted infections.

“By far, the greatest risk [from Zika infection] is to women who are pregnant. Children, regardless of age, are not at particular risk,” says Benjamin Schwartz, M.D., deputy chief of the acute communicable disease control program at the L.A. County Department of Public Health, who offers these prevention tips.

Take care with travel. Right now, all identified cases of mosquito-acquired Zika have been in people who have traveled outside the U.S. – mainly in the Caribbean, South and Central America and Mexico. At this point, mosquitoes here are not transmitting Zika, and pregnant women (in any trimester) should avoid travel to Zika-prone areas. The list of travel warnings is constantly being updated, so check the www.cdc.gov/travel for advice.

If you have traveled to an area experiencing Zika infections, don’t get pregnant right away. “We recommend that [women] wait at least one month after returning before they become pregnant,” says Schwartz. Some people infected with Zika have a mild rash and joint pain, but many are infected without ever knowing it. Waiting a month ensures that any infection will have cleared.

Take personal precautions. Unlike the Culex mosquitoes that transmit West Nile virus here and are active mornings and evenings, the Aedes mosquitoes that transmit Zika are active during the day as well. This means people in Zika-prone areas should take 24-hour precautions. Schwartz says insect repellants containing the active ingredients DEET, picaridin or IR3535 are effective and safe – even for pregnant women – when used as directed. Staying indoors in rooms with window screens and air conditioning, wearing long sleeves and long pants, and spraying clothing with repellants containing permethrin will also help you avoid mosquito bites.

There have been just two cases of Zika infection spread through sexual transmission, but the CDC recommends abstinence or condom use if a man had traveled to a Zika-prone area and his partner was pregnant.

Do your part at home. L.A. County has five mosquito and vector control districts that will be working to control mosquito populations as the weather warms. “They do a phenomenal job, but they require people’s help,” says Schwartz. Areas of standing water around your home allow mosquitoes to breed. “And these can be really small, for instance, as small as a bottle cap,” Schwartz says, adding that saucers placed under potted plants are another place water collects. “Those are perfect areas for mosquitoes to lay eggs.”