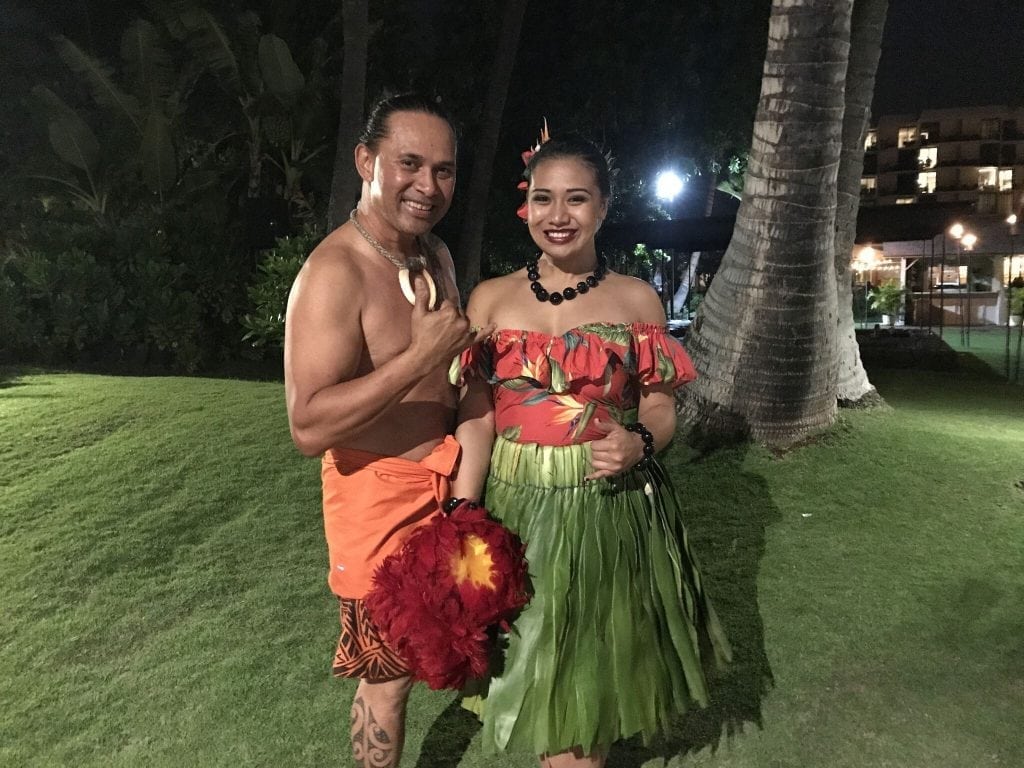 Ten years ago, my husband and I enjoyed post-wedding bliss on the island of Hawaii. I hadn’t been back since and booked a return trip on impulse, hoping we’d have family available to watch our 3-year-old twin boys. That would give Adriohn and me a chance to reminisce, and to enjoy some time with our 5-year-old daughter, Mirae.

Our plans fell through and it turned into a girls’ trip. All of a sudden, I had to figure out what Mirae and I would enjoy separate from Daddy and “the brothers.”

“I know what a girls’ trip is,” said Mirae. “We get our nails painted and go to the beach.”

Not on this trip! I was determined to school my mini-me on the delights of Hawaii and time in a nail salon was not going to be one of them, even if I did need a pedicure.

Flying into Hilo International Airport, on the east side of the island, gives you great access to Hawai’i Volcanoes National Park, but many volcano tours are not suitable for children under age 8, and Mauna Kea activities are restricted for kids under 16. Plus, the weather is rainier and less predictable. We chose sunny Kona, to the west, as home base for our seven-day vacation. Kona is Hawaii Island’s tourist center and a launching point for many tours, and I knew there would be plenty of on-site activities at Courtyard King Kamehameha’s Kona Beach Hotel, where we planned to stay.

A Great Night and a Chill First Day

After we landed in Kona, the Island Breeze Luau was our first planned activity. We got to enjoy dusk overlooking Kamakahonu Bay at the hotel’s oceanfront luau grounds, watching dolphins swim close to shore, enjoying live music and feeling the breeze waft through our kinky hair. Our preferred seating put us close to the stage and gave us early entry to pre-show activities and the buffet – which included mac and cheese, fries and chicken nuggets for the kids. Mai Tais and fruit punch flowed and we all learned the Hukilau, a simple hula dance. Mirae also played Ulumaika, a form of Hawaiian bowling.

The actual show lasted almost four hours, telling the history of the Pacific Islands in story, song and hula. It was the best luau I’d experienced. Afterward, I chatted with a young woman named Tahila, daughter of one of the luau founders, who told me that the Island Breeze Luau started as a meetup between family and friends who shared a love of hula and listening to stories from elders. The gatherings eventually grew into a family business that has plans for expansion in the coming year.

The next morning, we woke up with no plans other than to get the lay of the land, buy cheesy hibiscus-print sarongs, eat chocolate covered macadamia nuts and figure out how to navigate food. We had our pick of local fare and mainland staples such as Pizza Hut and IHOP, as well as grocery stores within walking distance. We tried One Aloha Shave Ice Co. and Scandinavian Shave Ice, where a former L.A. family that now lives in Kona clued us in to the local kid beach. Then we decided on a seafood restaurant, The Fish Hopper, and wandered around town, feeling out our surroundings.

Our laid-back itinerary (keeping the first day open for exploration is something I recommend for any family trip) was a great way to introduce Mirae to the Aloha spirit. “I want to have a house in Hawaii, Mom,” she said before she dozed off that night.

For the next four days we explored Kona by land and sea. 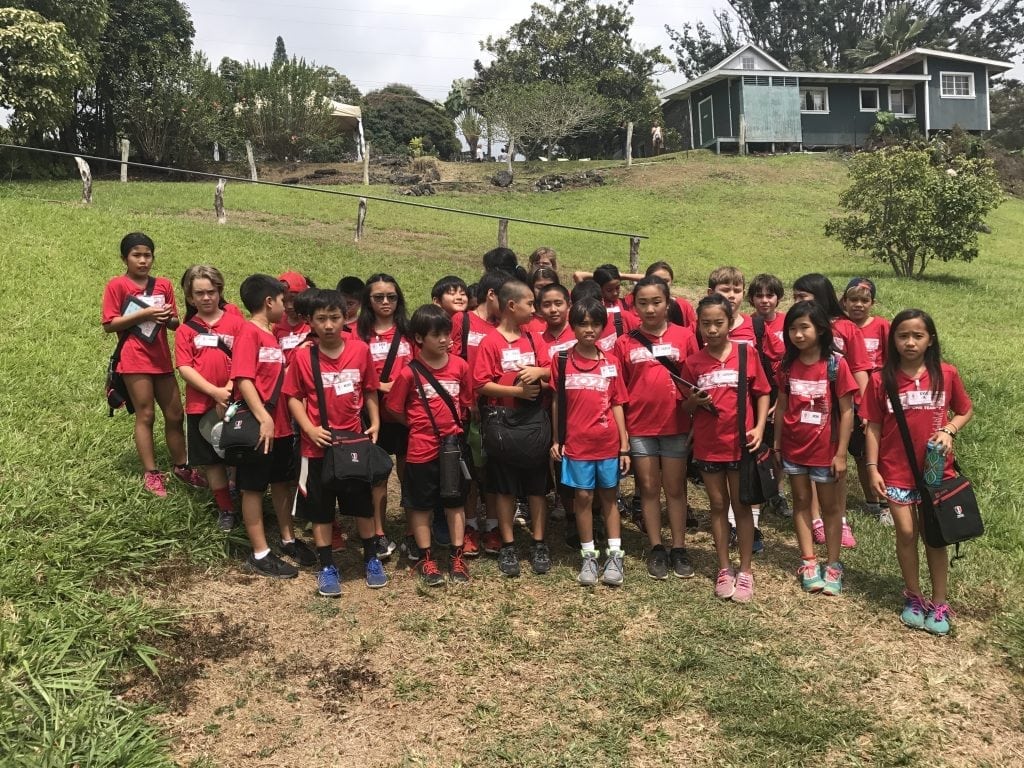 There’s no better way to experience nature on Hawaii than to go for a hike, and guided tours are the way to go. Hawaii Forest and Trail’s Kohala Waterfalls Adventure tour offered pick-up from our hotel. The eight-hour adventure included the commute in an air-conditioned passenger van to and from Kailua-Kona along the coast to the Kohala area with a stop in Hawi, the local town center. While Mirae played in the playground at Kohala Village Inn and Hub, locals clued me in to malasadas (sugary donut-like confections with filling). Actual time on the trail (which included swimming at one of the waterfalls and a lunch of tuna sandwiches, purple sweet potato chips and chocolate chip cookies) was about three hours.

Aside from a 15-minute downpour, the weather was perfect. We enjoyed the lush greenery, unique birdcalls and serenity of rushing waterfalls. We encountered cows, lots of poop, wild horses, roosters and Mimosa pudica, a plant that shrinks when you touch it. Our guide was masterful at mixing humor, anthropological facts and horticulture into the tour, and the view overlooking Pololu Valley at the end of our journey was intoxicating.

Where the Coffee Grows

Greenwell Farms, a fourth-generation Kona coffee farm about 20 minutes from Kailua Kona, offers free tours and coffee tastings daily. On the way, we stopped at Kona Historical Society and encountered 20 fourth-grade boys and girls standing beside a Portuguese stone oven where they had just baked Hawaiian bread, singing a song called “Oli Mahalo.” I asked their teacher, Patty Schmitz, if they would sing it again and was delighted when they agreed – and added two more songs as well. “The children sing a welcome song in the morning to prepare themselves for learning,” explained Schmitz. “They also share an oli, or entrance chant, as well as offer gratitude when they part.”

I wiped the tears that had unexpectedly filled my eyes and we walked down the hill for our coffee tour. Surrounded by avocado trees, scampering green geckos and crowing roosters, we tasted macadamia nut-flavored coffee, learned about each stage of coffee production and, after much searching, found Carl, the resident chameleon. It was an informative 20 minutes, and not at all over this infrequent coffee drinker’s head. 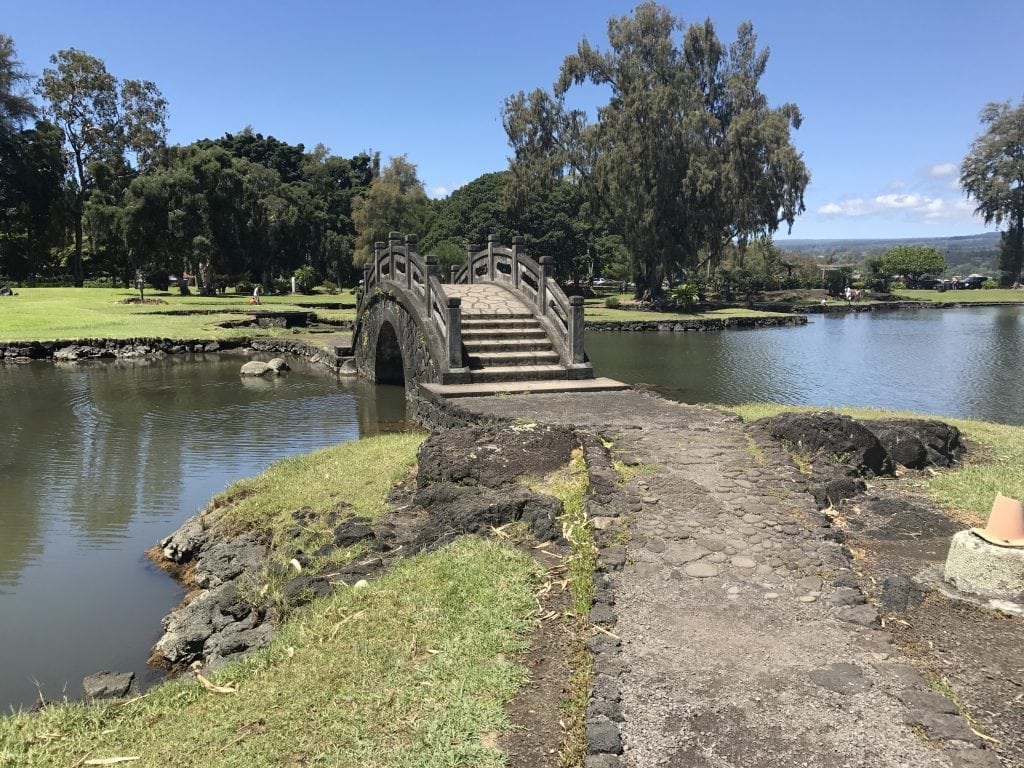 Liliuokalani Park and Gardens in Hilo is a lovely spot for a leisurely walk.

Snorkeling is another must-do for most people visiting Hawaii. The island has many beautiful options on the open ocean, but if you have a small child, consider a keiki (kid) beach protected by a reef for safety. Some beaches have lava pools as well, making for more marine-life exploration. We took the Kona Trolley to Kapalu’u Beach, famous for its sea-turtle sightings. Mirae was convinced there were sharks in the water, so we were lucky that a sea turtle came right up to us where we stood on the rocky shore. He stuck his head out of the water as if to say, “Come on in.” We didn’t.

There are other ways to see sea turtles if your child isn’t up for snorkeling. Our Atlantis submarine tour took us more than 100 feet under water to see humuhumunukunukuapuaa, Hawaii’s state fish; colorful coral reef and sea urchins. When we spied a small shark hugging the last shipwreck we encountered, Mirae’s I-told-you-so moment included an eye roll and a cute smirk.

The Ocean Sports glass bottom boat tour at Anaeho’omalu Bay in Waikaloa Village allows you to look down into the ocean without going under. We saw vivid coral reef and dozens of turtles during the 30-minute experience.

Our last – and perhaps my last ever – water adventure was with Kona Boys’ Beach Rentals, stationed in a shack on Kona Beach Hotel’s private beach. We’d booked a canoe tour, but Mirae and I were the only ones scheduled, so our instructor, Kristen Bennett, suggested we go out on kayaks. I opted to have Mirae ride with Bennett so I could take pictures, but I ended up hoping no one had captured me on camera because I fell out of my kayak just as we approached the open ocean. Not much of a swimmer, I was terrified. Rather than swimming to shore, I opted to hold onto my kayak as Kristen pulled both boats back to shore slow and steady. This was not my idea of connecting with the sea. 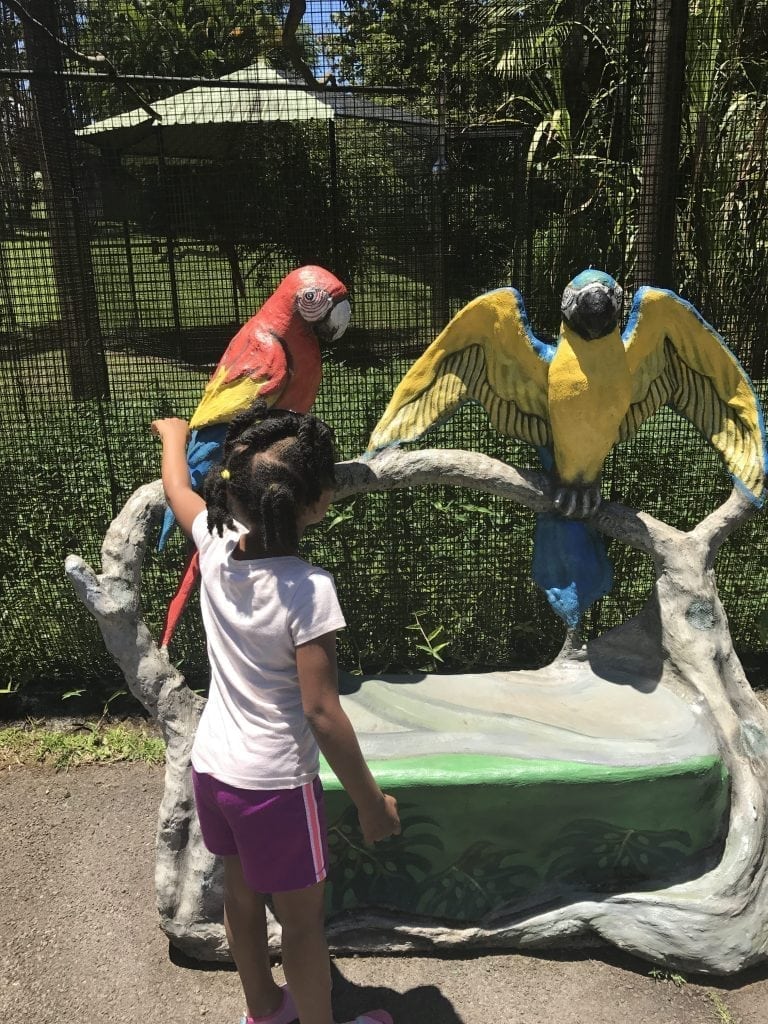 Mirae checks out the parrot bench at Pana’ewa Rainforest Zoo in Hilo.

We also spent two days visiting Hilo – well, one of those was in transit. Rather than make the 2.5 hour drive at a straight shot, we chose a meandering path with plenty of stops. We headed south to Pu’uhonua o Hōnanau, a National Historic Park where you can learn about ancient Hawaiian laws and social practices and how Hawaiian royalty spent their leisure time. The ranger talk by 30-year park service veteran Charles T. “Kale” Hua was revealing and heartwarming. We bought kukui nuts with stems there to play an ancient Hawaiian version of last top spinning. Kōnane is a two-player strategy board game from Hawaii that’s a checkers-like option for older kids.

Next, we traveled back north along the coast and inland to Waimea. Within eyeshot of the wooden playground in Waimea Park is Isaacs Art Center, an art museum and retail gallery that is a treasure trove of Hawaiian art history. Back in Pu’uhonua o Hōnanau I had picked up a painting kit to keep Mirae occupied while I enjoyed the views at our next stop, Waipio Valley, on the island’s northeast coast.

After some ocean gazing and art, we meandered down the east coast to Honokaa, where I bought Hawaiian music and art and we ate malasadas at Tex Drive-In. Farther south, in Papaikou, we visited Hawaii Tropical Botanical Garden and then walked the short Onomea Bay trail to the ocean. These short stops kept Mirae happy on the road.

In Hilo, we checked in to the Grand Naniloa Hotel, and the next morning we were ready for the opening ceremony of the weeklong Merrie Monarch Festival, which culminates with a hula competition that draws the world’s best performers. The opening ceremony features local school-age hula dancers, and the performances were amazing. We then visited the Pana’ewa Rainforest Zoo and Gardens, where the artsy benches are made in the form of animals. I found myself inside a caterpillar’s cocoon taking a quiet rest while Mirae hopped atop the alligator bench and made the white tiger bench roar. After our very full day, we took a more direct route back to the other side of the island to catch our red-eye flight home.

Our girls’ trip was a very full seven days without a single pedicure. We met some wonderful people, soaked up the sun and beautiful scenery and had several adventures we’ll be happy to remember. But perhaps the most important thing we brought back was a little of the Aloha spirit.

Hawaii Forest and Trail, Tours offered year-round. Most tour pickups in and around Kona, Waikoloa, and Hilo. Call (808) 331-8505 for details or visit www.hawaii-forest.com.

The Fish Hopper in Kona www.fishhopper.com/kona

Carolyn Richardson is a mom of three and Assistant Editor of L.A. Parent.