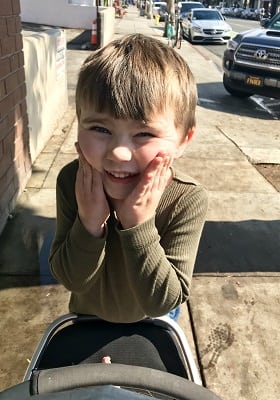 Here’s a common complaint (mostly from newbies): L.A. is a sprawling and isolating place. We natives will take the jab, for who among us hasn’t fantasized about our city of times past? Like when it was the size of Dubuque and there was nothing but oil fields west of Vermont Avenue. Or when red streetcars owned the roads from downtown to the beach.

This city has its challenges, and feeling stuck in your area generates stress, especially if you live in a place that doesn’t feel like a community. The younger parents I commiserate with wish for community-oriented ‘hoods as we struggle to strengthen our friendships across this massive region. What gets in the way is the city itself. The proof is when your friend in Pasadena asks you to come over for a playdate on a Thursday night at 6 – but you live in Santa Monica.

Not going to happen.

While the sheer size of the area can be confounding, the onus is on us residents to create a sense of ownership in our neighborhoods. That got me wondering: Which neighborhoods in L.A. have succeeded in creating a small-town feel? I set out with my sons Hank and Leo on a quest.

First ground rule: The neighborhoods have to be within L.A. city limits. The aforementioned Santa Monica and Pasadena are their own cities with separate city governments, schools and police forces. That means that many L.A.-area towns that market their small-town-charm – including El Segundo, Culver City and Glendora – are out. Apologies.

Second rule: The neighborhoods have to take up a significant portion of the city. They cannot just be a particular cross-section where you see strollers and coffee houses. Atwater Village is lovely, but those two blocks of Glendale Boulevard are 12 lanes wide.

However, Eagle Rock, Atwater Village’s neighbor to the northeast, is a contender. If you squint and tilt, the neighborhood can feel part Midwestern college town and part 1950s suburbia. From the classic road signs and restaurants of Colorado Boulevard to the retro-chic style of its residents, one quickly gets a sense of Eagle Rock’s anachronistic identity. At its geographic center is Occidental College, a private liberal arts college with a student body that seems to evaporate once class is dismissed. It’s kind of like a Field of Dreams for angst-filled poli-sci majors. Hank loves Eagle Rock’s community and recreational center and enjoys family-friendly coffee places such as Swork Coffee off Eagle Rock Boulevard. To fill out its ’50s suburban vibe, Eagle Rock even has a high school make-out spot at Eagle Rock View Park. Another 14 years for you, though, Hank.

During our quest, we also explored South L.A.’s Leimert Park, Mid-City’s Larchmont Villageand Fairfax, East L.A.’s El Sereno, Westside’s Playa del Rey and even Topanga, which I include because, while it is unincorporated, much of this census-designated place is run by the city and county of L.A. Topanga is the only place in

L.A. where Hank can get bitten by a rattlesnake at the same time he gets bitten by some New Age mystical hooey. “Dad, this place has a funny energy,” he tells me.

The village can feel like a Montana roadside pitstop with its country general store, local saloon and greasy-spoon restaurant. The irony is that more than a handful of locals here can be found writing things like HBO miniseries. While it feels removed from modern life, residents and visitors can enjoy community yoga and children’s used-clothing shops. My wife, Kate, likes Pebbles on North Topanga Canyon – a perfect place to get Leo some new threads on the way to the trailhead.

Another favorite of ours is Leimert Park, which begins where Exposition Boulevard meets Crenshaw and spreads out south and east. It has long been an African American art, cultural and religious core of L.A., full of old charm, family-friendly events and art spaces.

At the end of our tour, though, Hank asks, “Where’s the little towns?” (His grammar is … well, he’s still 3.) I realize that Hank has a point. For all of their community efforts, historical importance and individuality, I would have never mistaken one of L.A.’s neighborhoods for a small town. Our neighborhoods are unmistakably metropolitan. I guess that’s what makes L.A., well, L.A. – a wonderful sum of its flawed and confusing parts.

And if we wanted a small town, we wouldn’t live here.