Proceeds From Book Will Benefit Children’s Health By Combating GSD 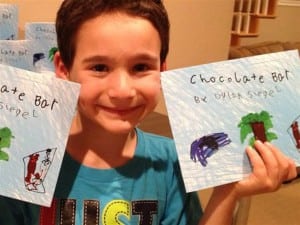 Los Angeles 8-year-old Dylan Siegal is self-published author of the children’s book “Chocolate Bar.” He wrote and illustrated a vibrant and thoughtful picture book as part of a children’s health campaign to help raise money to find a cure for Glycogen Storage Disease, a rare liver disease that Jonah, his best friend, suffers from. Children born with this illness lack the liver enzyme that turns glycogen into glucose. It can cause their blood sugar to drop dangerously low, resulting in severe hypoglycemia, seizures, and even death.

The campaign started two years ago and since then has reached its goal, officially passing the $1 million mark. Nearly 25,000 copies of “Chocolate Bar” have been sold, with purchases from all 50 states and more than 60 countries. All proceeds are donated to the University of Florida where Jonah’s doctor, David Weinstein, M.D., is director of the Glycogen Storage Disease Program.

“I am so happy that we finally reached my million dollar goal,” says Siegel, who vows to continue to raise money for his friend until his disease is “cured forever.”

Elementary schools nationwide have helped raise donations, including Dylan and Jonah’s own, Wise School in Los Angeles. The funds raised have helped finance the hiring of a new geneticist, paid for studies resulting in new gene therapy treatments and kept the University of Florida GSD research facility open and on track for clinical trials that could one day yield a cure.

For more information or to purchase “Chocolate Bar,” visit www.chocolatebarbook.com.