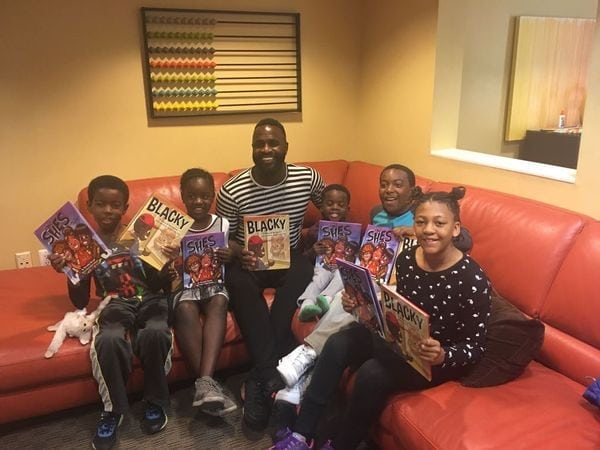 Author Terrence Terrell pays a special visit to the PAAC Book Club where he read his “Blacky,” a story that encourages children to embrace diversity. PHOTO COURTESY TRACIE GIPSON

As baseball season heats up, local children are catching up on some old school stats—specifically, the historical achievements of African American baseball players. Pop quiz: Which baseball player hit more homeruns than Babe Ruth in a single season? The answer is Josh Gibson. While his name may be unfamiliar to some, it’s etched in the young minds of Parents of African American Children (PAAC) Book Club members.

PAAC was founded in 2010 by Desarae Rozar, LCSW, as a means to cultivate relationships with other families raising African American children in the San Fernando Valley. “We provide African American children the opportunity to build friendships with peers who share a common cultural heritage,” said the mother of two sons. Book Club launched as a natural adjunct to PAAC and is valued for celebrating diversity while educating children, ages 5 to 11, about their history and the importance of perseverance. Books emphasize achievements of African Americans in art, science, math, language arts, social studies and music—and often reveal contributions of blacks that children aren’t exposed to in school or the media.

During the school year, the PAAC Book Club rotates monthly to the host’s home or chosen location. The most recent Book Club was held at a local park where the kids enjoyed a friendly game of baseball, hot dogs and snacks in the dugout. The kids also showed off their smarts, sharing facts gleaned from their latest read about Jackie Robinson and the Negro Baseball League, including Josh Gibson’s season of 89 homeruns that beat Babe Ruth’s record in the early 1930s.

Other Book Club meetings have featured President Barak Obama, Astronaut Mae Jemison, the Little Rock Nine group of students who tested the Brown v. the Board of Education, and a special visit from Terrence Terrell, author of the children’s book, “Blacky.”
“To further engage the children, we include a game or activity to reinforce the subject matter,” said Desarae. “Last January, we gathered for a birthday party for Martin Luther King, Jr. —birthday cake, candles and song included—where each child shared their dream for the future.”

An added bonus: hosts can choose subjects to match a child’s interest. For example, 11-year-old Noah Gipson’s passion is model railroading so the PAAC Book Club studied Elijah McCoy—the inventor of oil cups used to expedite rail travel on steam trains. He learned that African American people have made significant contributions to railroading—people who look like him.

Whether the kids attend public school, private school or are homeschooled, they gain priceless information about their heritage. “It provides an opportunity for children to explore literature, see positive representations of themselves and reinforce self-love, self-acceptance, strong identity and positive self-esteem,” said Desarae. “It’s like an armor of knowledge that can instill confidence and serve them throughout life. And that’s a homerun for us all.”