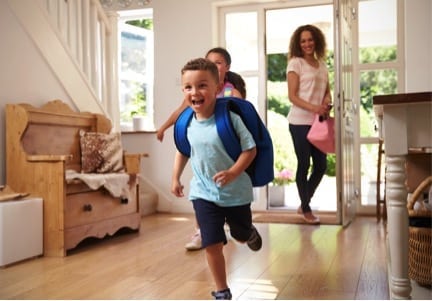 Remember last year’s back to school photo? The kids wore big, happy grins and fresh haircuts. Inside their shiny new backpacks awaited orderly pencil cases and a homemade-with-love lunch filled with summer veggies and nothing processed.

Cut to the second week: Running to the car five minutes late, the day’s completed homework forgotten on the kitchen table and cranky parents playing Rock-paper-scissors to see who has to leave work early to take kids to ballet and soccer.

Sound familiar? You’re not alone. While we often have high hopes for the start of the school year, many times it doesn’t take long for those grand plans to disintegrate like so many Goldfish crackers at the bottom of a backpack. But this year will be different. Why? Because we offer this: Your breakfast-to-bedtime guide to keeping yourself and the kids on track as they trek back to school.

Ben Franklin knew what he was talking about when he suggested that getting to bed early and up early can make you healthy and wise. The key? Don’t wait until the day before school starts to implement earlier bedtimes and wakeup calls.

“When shifting from a summer to a school schedule, it’s important to anticipate and start to move the bedtime earlier about 15 minutes a day a couple of weeks in advance,” says Sally L. Davidson Ward, M.D., medical director for the Sleep Center at Children’s Hospital Los Angeles.

Consistency is the best practice, but we all know those last-minute projects, forgotten quizzes and late-night school events can be the enemy of the Sandman. What’s a parent to do?

Davidson says a short afternoon nap can help restore a child’s energy but should be limited to no more than 30 minutes so that he’ll still be sleepy at bedtime. What about those super-early start times (zero period, we’re talking to you)? Davidson noted that even California state legislators are on board with trying to shift that first bell a little later: Last spring, the Senate passed SB 328, which requires the state’s middle and high schools to start the school day no earlier than 8:30 a.m. The American Academy of Pediatrics supported the legislation.

Davidson offers one more important tip, although admittedly, this can be a tough one for older kids: Shut down the phones and iPads at least 30 to 60 minutes before hitting the hay. “Screen time is such a big competitor for healthy sleep,” she says. “Reading in bed is a better way to transition from wakefulness to sleep.”

Ben Franklin also famously said, “By failing to prepare, you are preparing to fail.” To prevent back-to-school shock, start prepping the kids and yourself at least two weeks ahead, says Rosalinda Lugo, Ph.D., Ed.D., administrator for the Parent and Community Services department in the Los Angeles Unified School District. Create a designated space at home where students will keep school supplies, stow their backpacks and get homework done. And because friends and teachers will be asking about summer, here’s a helpful idea: “Right before school starts, talk to your kids about what they did that summer,” Lugo says, adding that even the little stuff can remind them of the good times they had – and prep them for those inevitable “What I Did This Summer” papers.

As back-to-school time approaches, it’s also a good time to start teaching kids some independence, establishing routines in which they learn to do for themselves. Los Angeles mom Esther Diaz has her two kids, ages 10 and 8, pick out their clothes the night before, make their snacks for the next day and get their own breakfast started in the morning. “Part of it is just teaching them self-sufficiency,” she says. But she adds that working ahead and establishing routines has alleviated much of the crazy morning stress in her household.

Another good stress reliever, says Lugo, is projecting a positive attitude as you enter the fresh school year. Kids will pick up on your enthusiasm and, hopefully, take that with them to the classroom. “Parents need to communicate the right thing to kids,” she says. “On the first day of school, drop the kids off with a smile.” 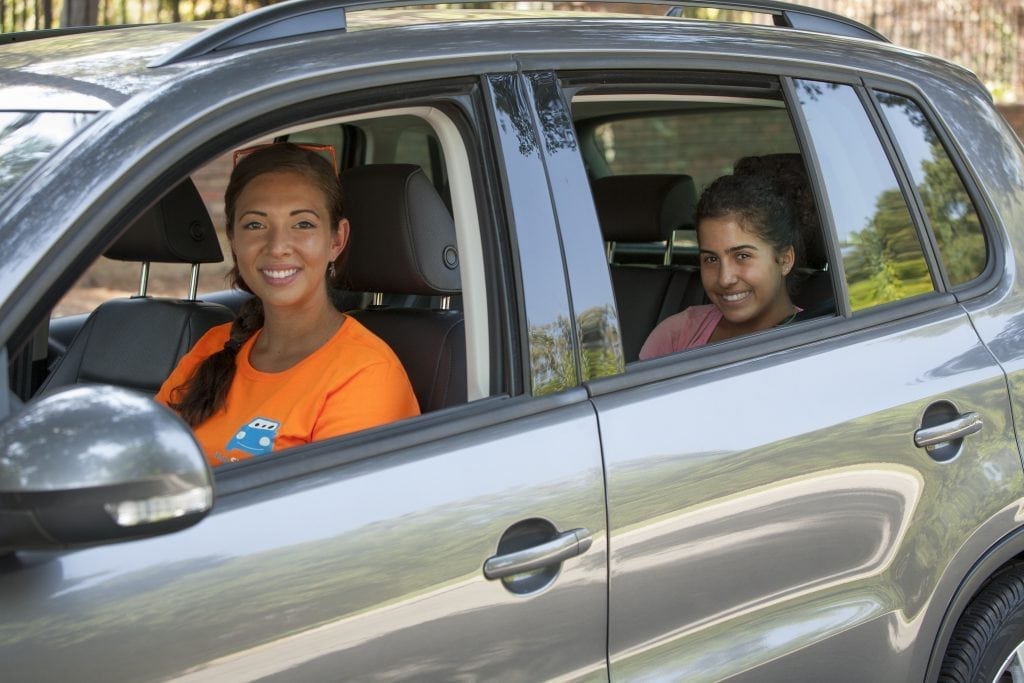 It’s high time we addressed the beast that lurks deep inside all of us: The drop-off-line parent.

None of us is without sin. We’ve all had days when we didn’t follow the rules and perhaps became “that mom.” Or maybe we directed a few colorful phrases at the parent who leaves the car unattended in the pickup line, leaving everyone else stuck and exasperated.

But even if we can tame that beast, drop-offs and pickups are just a small piece of the transportation equation. Add after-school activities, play dates, sports, tutoring and school functions and you’ve got another full-time chauffeur job. In fact, a poll conducted last summer by locally based children’s ride service HopSkipDrive noted that 35 percent of parents say managing their kids’ transportation needs is more stressful than doing their taxes.

That’s when it might be time to look to other solutions besides coin flips between you and your spouse. HopSkipDrive cofounder and Los Angeles-based mom of two Diana MacFarland says she was at a child’s birthday party when she suggested that moms should put money in a hat and hire out the kid schlepping. The idea struck a chord, and she and two other working moms founded HopSkipDrive.

“[The business idea] came from a very real need we all had,” MacFarland says. Among herself and her two partners, there are eight kids, five schools and 17 different after-school activities. “Families are busier than ever before,” she says. And the majority of children in the U.S. live in households where all parents work. Oftentimes, hiring out some of the transportation can allow kids to participate in activities they otherwise wouldn’t be able to. “I was feeling guilty telling my son, ‘I’m sorry, but you can’t do karate because it’s at 3 in the afternoon,’” she says.

Using the service requires some advance planning (you have to make reservations at least eight hours ahead), so check your calendar for gaps and arrange for recurring rides to regular appointments and activities.

And tackling the drop-off monster? HopSkipDrive also has a feature to organize carpools, which can ease some of the congestion. Most L.A. Unified schools also offer the Safety Valet Program, which trains volunteers to keep the lines running smoothly. So, follow the rules and consider walking a mile in the safety valet’s shoes by volunteering and experiencing it from the front lines.

Off to Work We Go 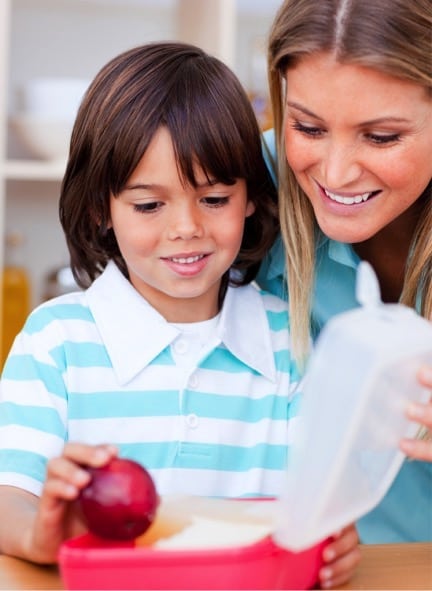 Those first few days back at school are the honeymoon period, but kids know it doesn’t take long before the dreaded “H” word starts popping up like a manic game of Whac-a-mole.

It’s our job to stay on top of things, and our anxiety about homework often comes from not having a handle on what’s due when – and having to rely on unreliable sources (that’s you, kids) for deadline information. A better plan is to go right to the source.

“Don’t skip Back to School Night,” advises Angelina Arrington, a longtime educator and administrator and owner of Academic Savvy, a Culver City-based educational services business. Pick up the syllabus for each class and keep them handy throughout the year. “That way, you know when big projects are due and you understand the rhythm of the year,” Arrington says.

Put project deadlines and recurring assignments and quizzes in the calendar on your smartphone; better yet, have your kids put the homework on their calendars and send you an invite. “That helps them be responsible,” Arrington adds.

Good calendar maintenance can help with the what’s-due-when problem, but what can we do to keep our kids on task once boredom sets in and they realize that not all homework is going to involve glitter and neon markers?

“First, discuss with your children that some things are just going to be required, and not everything is fun,” Arrington says. “But have an end goal, a celebration. It can be as simple as a high-five or extra time doing something they enjoy.”

It’s normal for children to experience homework malaise, but you can help them over that I-just-don’t-feel-like-doing-homework bump. Arrington calls it, “eating the fog,” and the premise is that if they can commit 10 to 15 minutes to something even though they hate it, they’ll be past it before they know it.

The school routine can become grueling and tiresome. Yet, before you know it, it seems your kid is standing before you in a graduation cap and gown.

Don’t let the inevitable school-year stressors get in the way of taking time to soak it up and enjoy your child’s school years. Yes, the last-minute Mom-I-have-to-invent-something! project could make the calmest parent throw up her arms in dismay, but how you handle these moments can have a direct impact on how your child learns to deal with her own ups and downs. 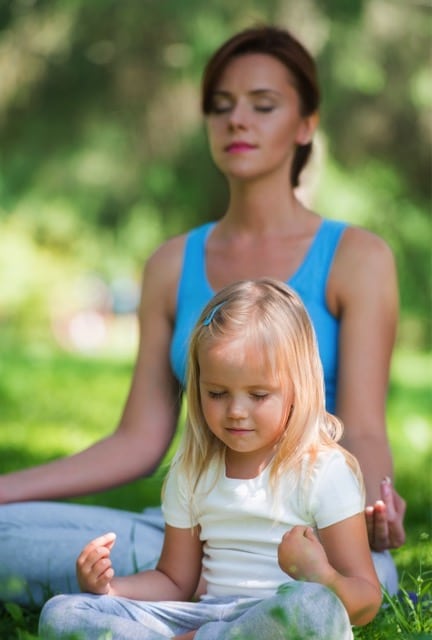 “Learning to handle stress is probably one of the most important things we can do,” says Diana Winston, director of mindfulness education at UCLA’s Mindful Awareness Research Center and mom to a 7-year-old daughter.

Winston teaches mindfulness, which can be a useful tool for “emotional regulation,” also known as “keeping your cool under pressure.” As part of a mindfulness routine, she recommends the STOP method of stress management:

Mindfulness is about paying attention to what’s happening in the moment and not allowing the past to drag us down or the future to keep us in a constant state of “what if.” While your first impulse in a heightened moment might be to shout or lose your temper, taking a moment to think things through can help you regain your composure and find a solution.

“Through mindfulness, we can pause and take breaths, calm down and act in a better way,” Winston says.

Of course, keeping stress under control can be easier said than done, so Winston says parents should build in their own stress-relievers, such as setting aside time for themselves and dedicating five minutes of the day to daily meditation.

“We all have at least five minutes,” she says. “Just practice being in the moment. Practice breathing. It’s almost like a muscle. As you get better, it becomes something you can incorporate in your life.”

Incorporating all of these little changes in your family’s back-to-school routine can make life easier and less stressful – and might even make the last day of the school year go as smoothly as the first.

Carolyn Graham is the mom of two and former editor of L.A. Parent.