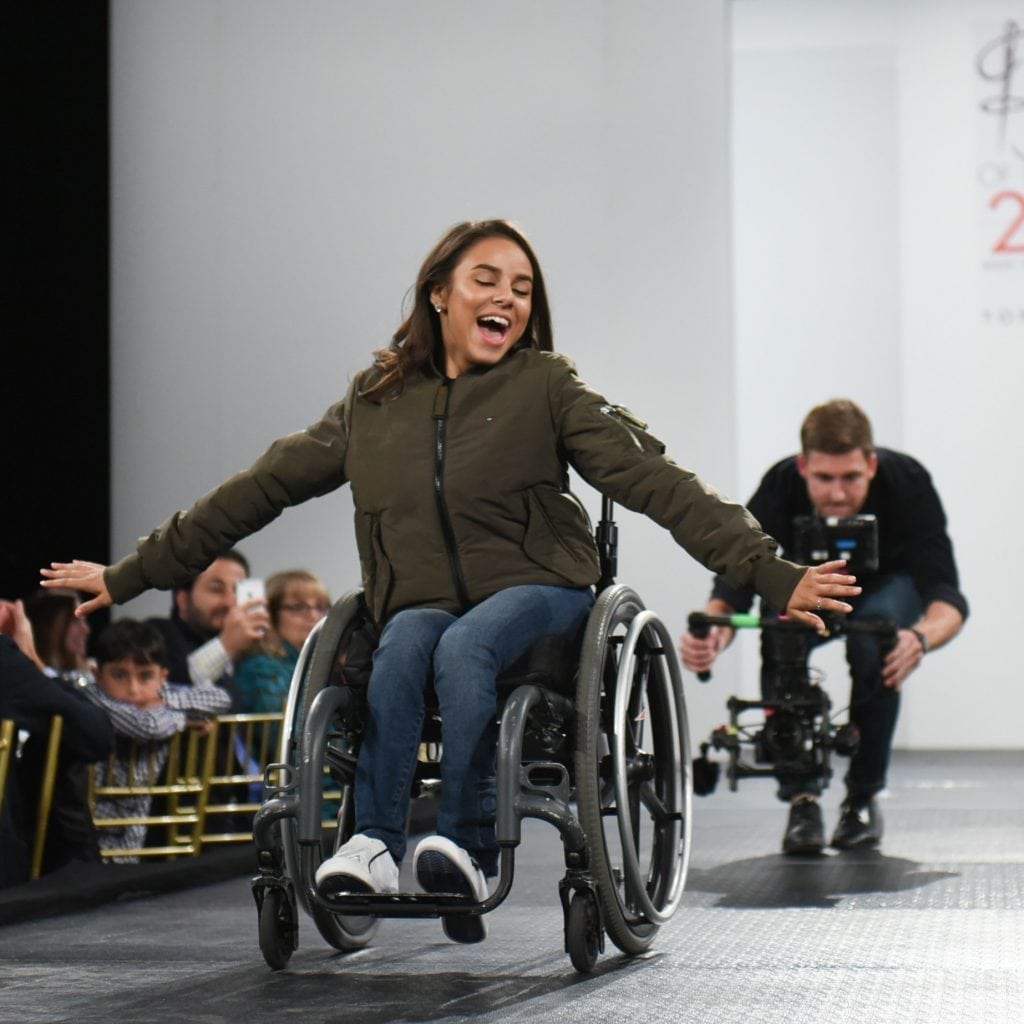 For some parents, the morning ritual of getting their child dressed is a dreaded battle, a frustration exasperated by buttons in wrong places, seams that dig into skin, tags that itch, shoes impossible to put on correctly and fabric that feels inhumane to sensitive skin.

Putting clothes on a child with a disability – whether that child uses a wheelchair or leg or arm braces, wears a feeding tube or has sensory issues – has never been easy. Parents often opted to have clothes professionally tailored for their child (expensive), tried to alter the clothes themselves (time-consuming and possibly aggravating), or chose a wardrobe straight from a hospital patient catalogue (functional and convenient but lacking in any kind of personality or style).

The fashion world – a $3 trillion global industry according to Fashion United – has rarely paid attention to the needs of people with disabilities, even though the U.S. Census reports that they make up 19 percent of the population.

Adaptive clothing lines have traditionally been super-small organizations with designers working out of their basements or garages, often for little to no profit.

But things are heating up for adaptive clothing in the fashion world. The runways of L.A. and New York, department stores and online shopping portals are now championing adaptive lines, building a connection between functionality and fashion – and not just for adults, but children, too. Addressing specific physical needs, garments are more than just something to wear – they can provide emotional relief, long-lasting recognition and personalized joy.

Tommy Hilfiger became the first U.S. designer fashion brand to launch an adaptive children’s line. Among the familiar TH stripes and logos, you can find apparel that incorporates Velcro fastenings, wrist loops for easier pull-on and wear, pants with larger leg openings to accommodate braces and orthotics, and magnetic zippers that can be fastened with one hand.

Likewise, Target expanded its kids’ Cat & Jack brand in 2017 to include an adaptive line, following through on a proposal from its brand plus-size design director Stacey Monsen, who was dealing with clothing issues at home with her 7-year-old daughter Elinor, who has autism. Today, the Cat & Jack adaptive line includes a range of accommodations such as pajamas and bodysuits with hidden abdominal openings for those using gastrostomy tubes, tagless and sensory-friendly items with zippers that can be worn in the back or the front and jackets that open on the side to make it easier for children in wheelchairs to dress themselves.

“A movement is the perfect word for what is happening right now,” says New Jersey-based Mindy Scheier, who started the nonprofit Runway of Dreams Foundation in 2014 to broaden the reach of adaptive clothing and to promote people with disabilities in the fashion world.

Scheier knew the landscape. Her son Oliver, 8 at the time, has muscular dystrophy and just wanted to look like other kids. A fashion designer for more than 20 years, Scheier worked many nights at her kitchen table to modify mainstream brands for Oliver, who uses leg braces, before realizing, “There must be a million others who feel the same way.”

Scheier began working to educate the fashion industry about this untapped market, an endeavor that is now paying off. After all, people with disabilities make up the largest minority in the world, she says. Through extensive research, focus groups and networking, the foundation laid the groundwork for the attention that’s being seen today. “Our society is so ready for this,” Scheier says.

Scheier first partnered with Tommy Hilfiger on the spring 2016 adaptive kids’ collection, which marked the first time a global fashion brand modified its apparel to accommodate the needs of the differently abled community.

“The impact has been fantastic,” Gary Sheinbaum, CEO of Tommy Hilfiger Americas, says on the Hilfiger website. “We’ve had customers purchase from almost all 50 states in the first quarter, [and] two of our top six selling styles on tommy.com were from this collection. In fact, 20 percent of our kids’ business was driven by this special capsule.”

Creating adaptive clothing lines is just step one, says Scheier, who continues to lobby the fashion industry to incorporate people with disabilities into design-thinking, fashion runways, ad campaigns and as spokespeople. The foundation also awards scholarships to students who create adaptive clothing and to aspiring fashion designers with disabilities. Additionally, the foundation helps brands partner with local facilities and organizations, such as Shriners Hospitals, to help establish clothing donation systems so families on limited budgets will have access to adaptive wear.

“It’s really all about making the kids feel good about themselves,” says Stephanie Alves of West L.A., who launched ABL Denim in 2011 to create inclusive jeans for people using wheelchairs. Since then, she’s expanded her line to address the needs of those with sensory processing disorders, creating jeans made from soft sweatshirt-like denim that feature elastic waistbands sewn on the outside.

Alves says she has a lifelong connection to disabilities and clothing. She grew up watching her mother care for her younger brother, who was born with Shprintzen-Goldberg syndrome, a condition that can cause developmental delays and a range of physical challenges. “He was in diapers until he was 10 years old,” she says. “He could not dress himself, and it was always a struggle to get clothes on him.”

The catalyst, however, for Alves’ adaptive line came when her 46-year-old stepsister broke her back and couldn’t find appropriate clothing. Alves realized the market need and turned her attention to a universal clothing item: jeans. 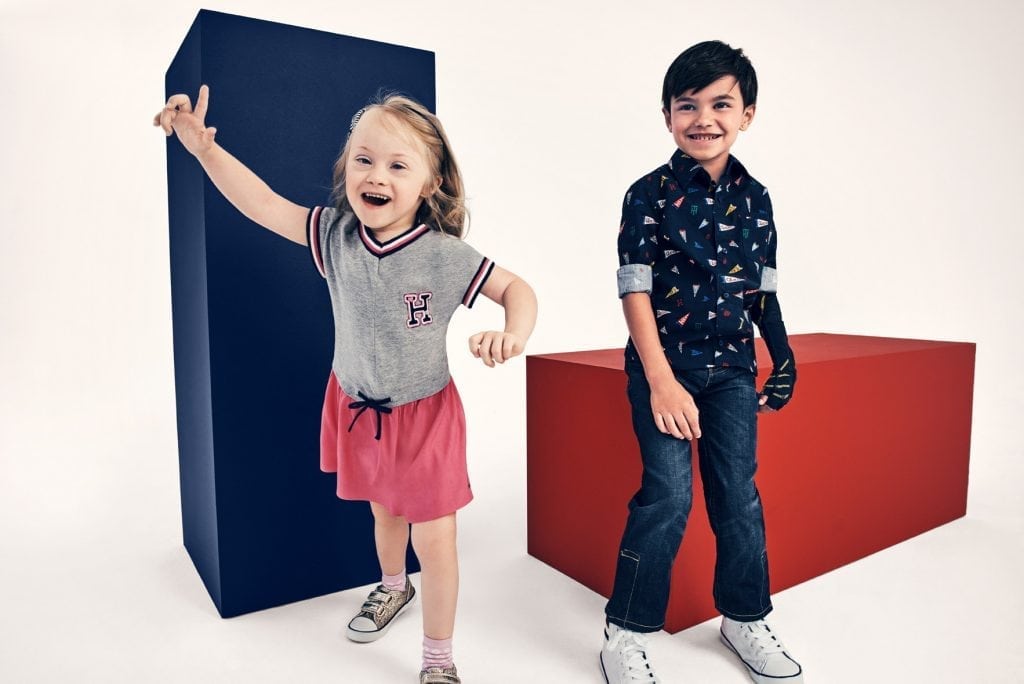 Alves has plans to broaden her line to include a tech-jacket vest that will aid in calming anxieties. She’ll also be crafting pants with twill fabric in navy, tan and black. She’s excited that her brand will be added to the offerings on the Zappos Adaptive website, one of the newer players in the adaptive fashion field.

Scroll through the online shoe and clothing warehouse to shop a wide range of shoes with adaptive versions, such as elastic laces and easy-open flaps at the ankles so they are easier to fit over a variety of orthotics and inserts without assistance. Reversible clothing with no defined front or back is perfect for those with limited mobility who want to dress themselves. Search through other categories that include easy on/off, pull-on pants and sensory-friendly options.

Scheier has seen dramatic changes during the four years since she started Runway of Dreams, and her children today mirror the evolution of not only the fashion trend but society’s embrace of people with disabilities. Her teenage daughter Stella gained the empowerment of watching her mother bring an idea to life. Her son Oliver, now 13, “feels less alone and realizes that so many others were in the same boat as he was,” Scheier says. “He now sees himself as just a typical kid.”

However, her youngest, 8-year-old Beau, doesn’t understand the hoopla. “To him,” says Scheier, “this is normal. Kids with disabilities should have the same options as everyone else. It’s just part of his world now. He’s the thinking of the future.”

Brenda Rees is a freelancer writer whose work has appeared in The Los Angeles Times, Westways Magazine, Arroyo Monthly and other print and online publications. She lives in Eagle Rock.