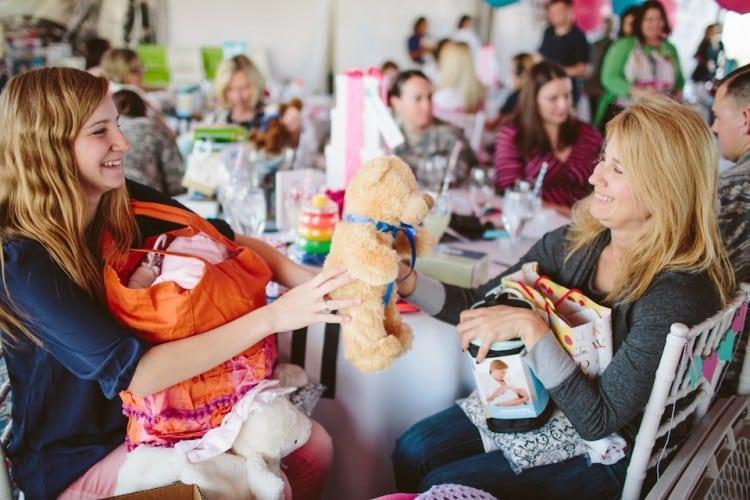 Television host, sportscaster and military spouse Leeann Tweeden is helping bring joy to 40 Los Angeles-area military moms-to-be when she serves as guest host of a group baby shower in their honor.  The event is scheduled from 11 a.m.-1 p.m. Feb. 16 in the clubhouse at The Riviera Country Club during the PGA TOUR’s 2016 Northern Trust Open.  The moms are active-duty service members or the spouses of deployed members of Naval Base Ventura County and other area military installations.

Hosted by Northern Trust and the Northern Trust Open, the “Once Upon A Shower”-themed event is being sponsored by baby bedding company Carousel Designs, with support from The Riviera Country Club, Hunter and Kandi Mahan/The Mahan Foundation, Birdies for the Brave and 4moms.   In addition to lunch, each of the honored moms-to-be will receive Operation Shower’s signature “Shower In A Box” – a gift of high-quality products for mothers and babies that have been donated by Carousel Designs, 4moms and other companies.

Married to a California Air National Guard member and the mother of two, Tweeden is the co-host of LA Today with Reiter & Tweeden on AM570 LA Sports Radio, as well as a social commentator for Dr. Drew On Call.

“As a mom and military spouse, I know first-hand how difficult it can be raising a family during deployment – and truly admire everything these amazing women do at home that enables their loved ones to proudly serve our country and protect our freedom,” said Tweeden.

Allan Sicat, president of presenting sponsor Carousel Designs and a former U.S. Army officer, said, “We are thrilled to join with Operation Shower and Birdies for the Brave to express our gratitude to these courageous military moms-to-be for their significant service and sacrifice on behalf of our country.”

The shower is just one of many military outreach activities that will take place during the Northern Trust Open, which will be held Feb. 17-21 at Riviera Country Club (1250 Capri Drive, Pacific Palisades.)  Active duty and Reserve military members, military retirees, non-retired veterans, and their dependents can enjoy complimentary tournament admission by logging on at https://birdiesforthebrave.sheerid.com/NorthernTrust2016/ and having their military status verified by Sheer ID.  A military ticket voucher can then be downloaded from the site.  A $1 verification fee is required for each military ticket downloaded.

Complimentary admission will also be provided for military members who present a Department of Defense-issued ID at the gate.  Once at the tournament, all military guests will be treated to complimentary food and beverages in the Birdies for the Brave Patriots’ Outpost Presented by United Rentals military hospitality chalet, located on the 14th tee at Riviera.  For information about other military outreach activities taking place during the Northern Trust Open, visit www.birdiesforthebrave.org.   For tickets and tournament information, visit www.northerntrustopen.com.