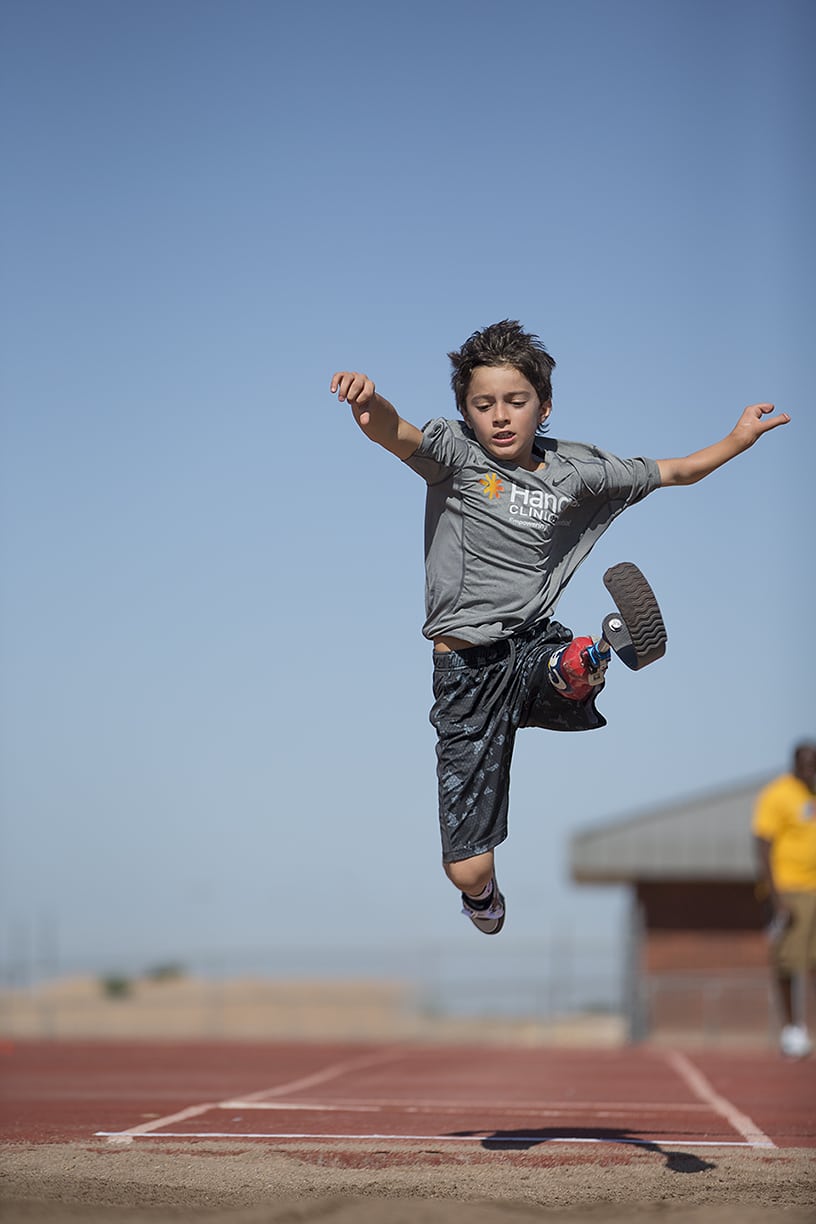 Ezra Frech competed in the long jump in the 2014 Desert City Challenge. He and his family have created a similar event for Los Angeles. PHOTO BY JASON GOULD

Ezra Frech, a Sports Illustrated SportsKid of the Year nominee in 2014, was born with no left knee or shin bone and only one finger on his left hand. And though he had his leg amputated below the knee at age 2 ½, nothing has slowed him down.

When his leg was amputated, doctors were able to attach one of his toes to his left hand, giving him two opposing fingers on that hand and allowing him to play a variety of sports, especially basketball. He is on the basketball and football teams at his school in Brentwood. He also competes in track and field, and since his first competition in 2013, Frech, now 10, has set nine national records in adaptive sports, established himself as a popular motivational speaker and has been featured on “The Ellen DeGeneres Show.”

And now, with the help and support of his dad, Clayton, and his mom, Bahar, he is founding the only multi-sport competition for the disabled in Los Angeles, the Angel City Games.

The track-and-field event, taking place at UCLA June 19 and 20, will be open to children, adults, veterans and active-duty military with physical disabilities, and will include an open division for military-related post-traumatic stress disorder and traumatic brain injury.

The Frechs have attended these types of events in other states, but found that there were no adaptive track-and-field competitions in Southern California.

“We want to start a movement in SoCal for this sport, and hopefully someday say we found some Paralympic athletes at our event,” says Clayton. But that doesn’t mean athletes need previous track-and-field experience or special equipment to participate. Clayton says athletes of all skill levels are invited to join.

The venue makes the accomplishment even more exciting for Clayton, a West L.A. resident and UCLA alum. “I always imagined the event would be held at UCLA,” he says. “I’m a hardcore Bruin, and I drive by there every day. Since UCLA committed to hosting in November, I have really had to get the wheels spinning in the Paralympic community. We have about 50 different people in different committees working hard to make this happen. It’s all for a great cause, and it’s a really wonderful community.”

The Angel City Games will be the next stop on what has been a long and exciting journey for the Frech family. They’ve traveled the country, watching Ezra outshine the competition at track meets. Last summer, Ezra earned seven national records in the 60-meter, 100-meter, 200-meter and 400-meter races, the shot put, discus, javelin and his favorite event, the long jump. He won eight gold medals at the National Junior Disability Championships. 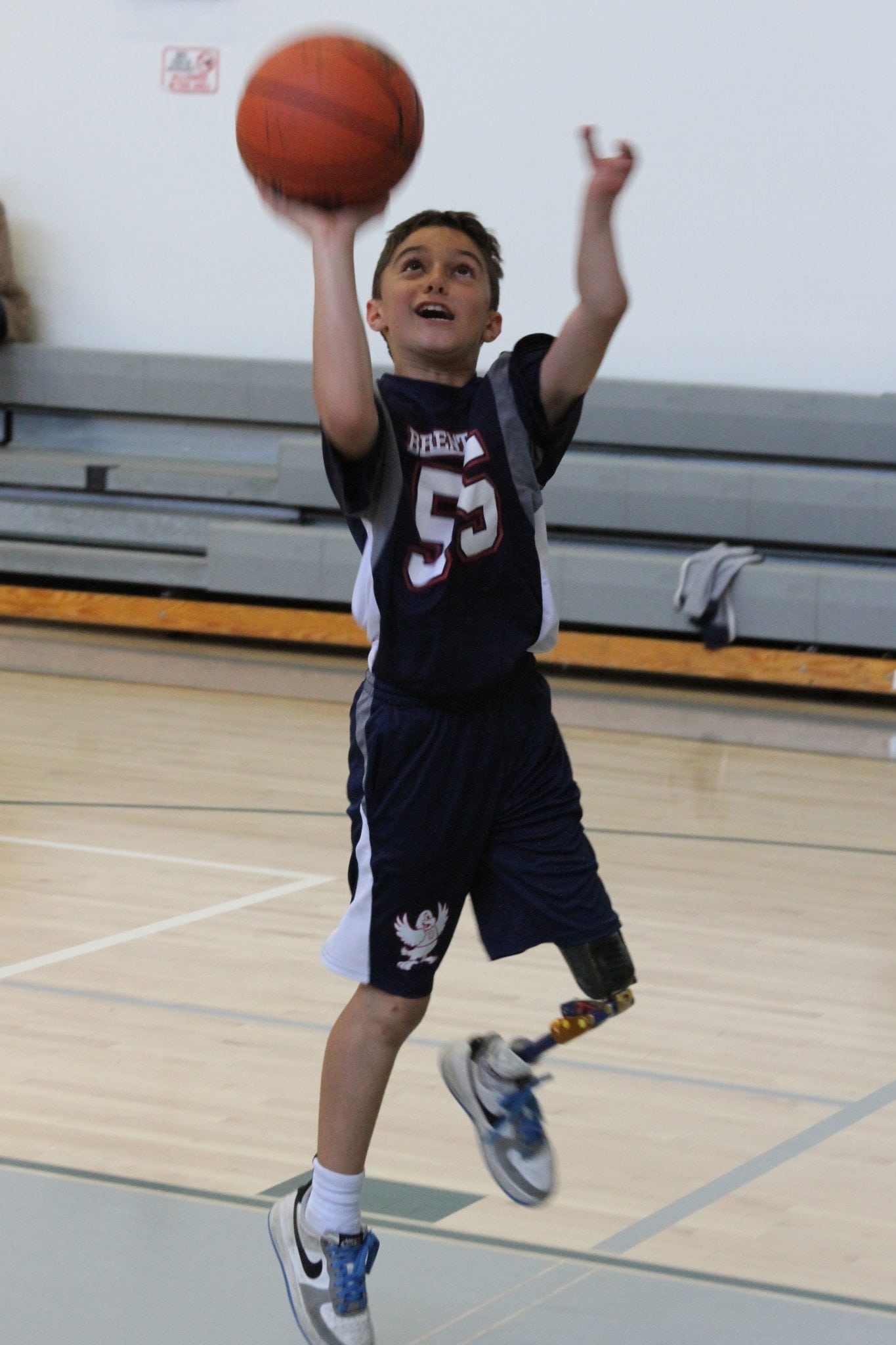 Despite his physical challenges, 10-year-old Ezra Frech excels in a variety of sports, especially basketball. PHOTO BY CLAYTON FRECH

His achievements caught the attention of Sports Illustrated and earned him a nomination as 2014 SportsKid of the year. “I applied just to be SportsKid of the month, so it was a really great accomplishment to be a nominee for Sportskid of the year,” says Ezra. “I didn’t end up winning, but I really just wanted to be in the magazine, and I was.”

“He pretty much doesn’t stop,” says Clayton of his son’s energy. “He’s an amazing athlete, and really coachable.”

Ezra, however, is not only a gifted and enthusiastic athlete. He is also a talented public speaker and role model who spreads the motto “being different is OK.”

“Ezra has been speaking to schools since he was in preschool,” says Clayton. “He’s just always been really comfortable in front of crowds and even on live TV and radio. He’s really got a career in motivational speaking.”

The largest crowd Ezra has spoken to has been 17,000 people attending the We Day youth event in Chicago in April. “I just feel comfortable. I am a little nervous at first, but then I just kind of go up there and I am fine,” says the fourth-grader.

Ezra says he is excited about the Angel City Games because it is something the family created together. On June 19, track-and-field and wheelchair basketball clinics will be held, giving those who have never participated in the sports the chance to learn some skills before competition on June 20. There will also be a celebrity wheelchair basketball game. Athletes and spectators can check out the Kidszone and VendorVillage, where they can learn more about adaptive sports.

“I am looking forward to the long jump and the celebrity wheelchair basketball game,” says Ezra. “Hopefully, my dad will let me be the announcer for that game.”

For information on how to join the Angel City Games as an athlete or volunteer, or just come out to support and cheer on your community, visit www.angelcitygames.org. Athletes can register to participate through June 10.

Melanie Gaball is a local writer and frequent contributor to L.A. Parent.