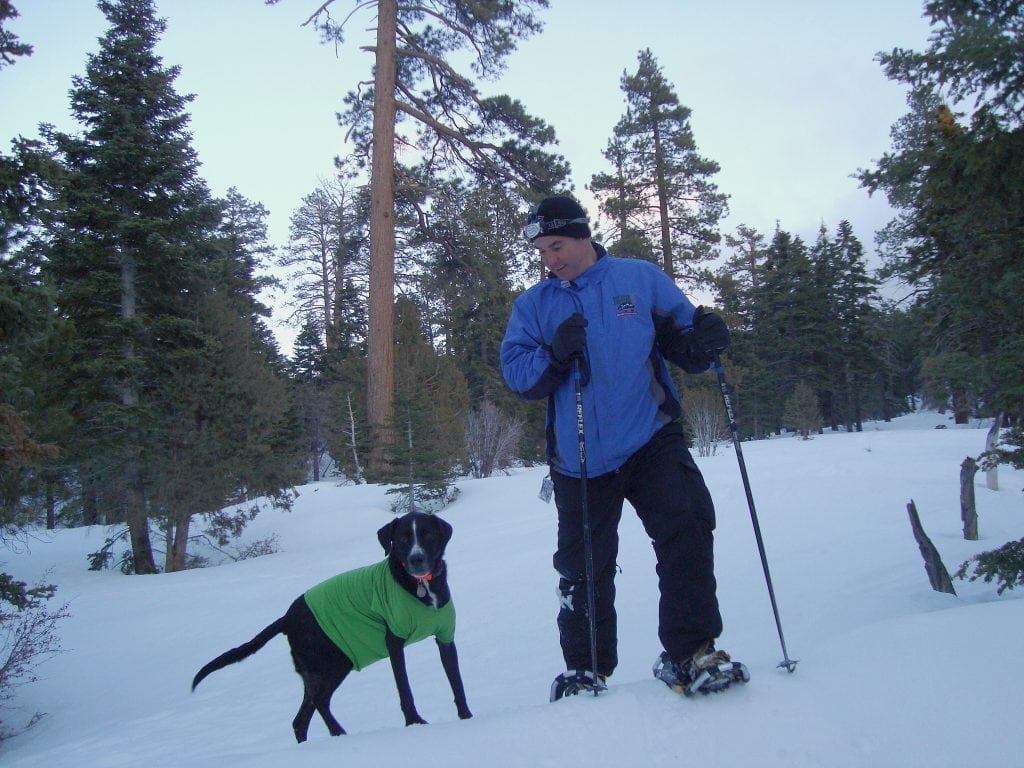 Snowshoeing in Big Bear let’s you slow down and explore the woods while walking your four-footed friend. PHOTO BY MIMI SLAWOFF

Most of us think of our SoCal home as an oasis of beaches, palm trees and sunshine. But there are plenty of winter sports available in the L.A. area – or not too far afield. From the time my three kids were tots, we went sledding in Frasier Park and skiing in Big Bear and Mammoth Mountain. As my kids got older, mountain resorts became our winter playgrounds for snowshoeing, cross-country skiing, snow tubing and other activities.

The 2018 Winter Olympics, coming up in February, can provide great inspiration for learning to ski or snowboard. Get on board in January during the annual Learn to Ski & Snowboard campaign (www.learntoskiandsnowboard.org) sponsored by resorts and makers of ski and snowboard gear. The website will connect you with resorts, gear and promotional deals so the whole family can hit the slopes.

Big Bear in the San Bernardino Mountains holds a special place in my heart. With its proximity to L.A., it’s where I skied as a teen and where my kids and I still go for quick ski trips. Big Bear Mountain Resort, which includes Bear Mountain and Snow Summit ski resorts, is a full-service, ever-expanding ski and snowboard facility with rentals, classes and children’s programs.

To the west, in the San Gabriel Mountains, Mountain High is popular with snowboarders but also welcomes skiers and has a full-service children’s sports center. All three resorts are equipped with adaptive sports centers dedicated to helping people with disabilities ski and snowboard.

Other Ways to Get Down the Hill

For those not into skis and boards, sledding and tubing offer more casual downhill thrills. The Frasier Park/Mount Pinos area in the Los Padres National Forest is the closest mountain for sledding fun. The area gets lots of snow, so arrive early to beat the crowds. There’s not a designated sledding area, but you can bring your own sleds (and chains for your car on snowy days).

Over in Snow Valley Resort, sleds are provided, and Snow Valley Snow Play boasts a chairlift to bring you and your sled to the top of the hill. For snow tubing, head to Big Bear Snow Play and Alpine Slide at Magic Mountain in Big Bear, or the North Pole Tubing Park at Mountain High. These mountain resorts offer tubing down long, snow-packed lanes and rides back up the hill on moving “magic carpets.”

If you prefer pedal power, you’ll have a blast with fat tire biking, a fairly new type of seasonal cycling. Mountain bikes fitted with extra-wide tires make it possible to peddle on snowy trails in winter and on rugged paths year-round. You can find fat tire biking, also called ice biking, in places that get lots of snow, such as Lake Tahoe.

If you don’t have time to drive to Tahoe, there’s a new 90-minute direct flight from L.A. to Ogden, Utah, where the Snowbasin and North Fork Park resorts have groomed areas and trails for fat tire biking for all ages. If you’re in town Feb. 3, the annual Sweaty Yeti Fat Bike Race is a good time to try the sport. The family festival features free fat bike demos, a kids’ zone and a sledding hill at North Fork Park (formerly Wolf Creek resort). Allegiant Air’s new service from LAX to Ogden starts at $35 one way. 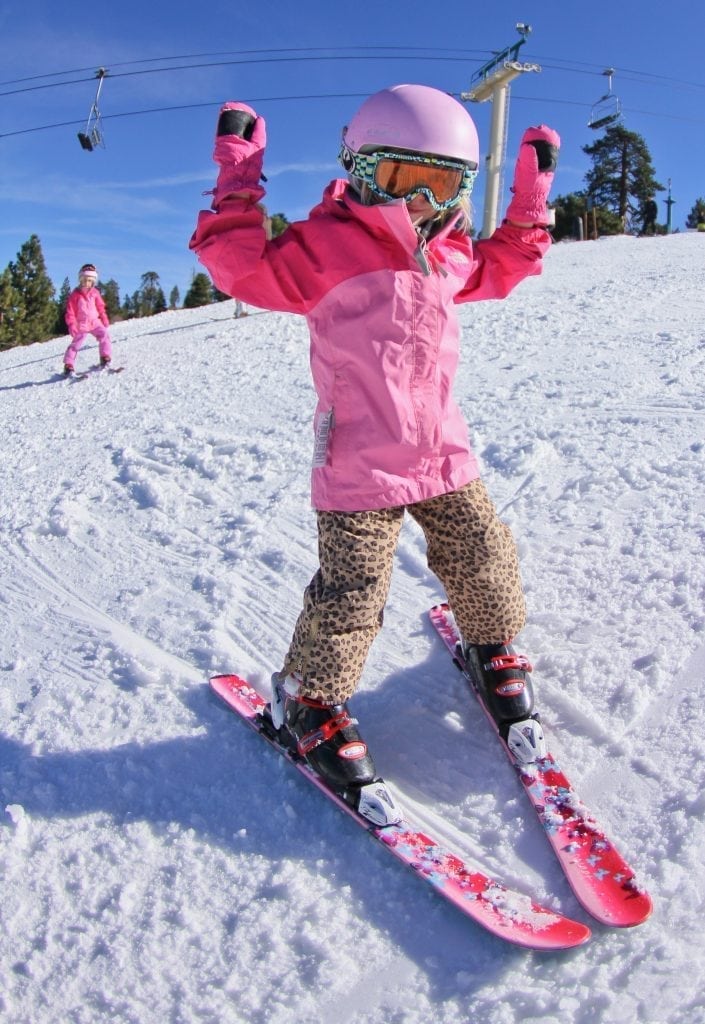 Slow down your wintry adventure by giving cross-country skiing a try, taking the opportunity to explore forests and meadows on snowy trails. It requires a technique similar to skating and is quite a workout on skis designed for traversing mostly flat terrain or gentle slopes. But, once you get into the rhythm, it’s a lot of fun.

From L.A., it’s less than a two-hour drive to the Mount Pinos Nordic Base in the Los Padres National Forest. The area is open for cross-country skiing and snowshoeing in winter. There are no rental facilities, so you’ll need to bring your own gear.

For designated cross-country facilities, head over to the San Bernardino Mountains. Self-proclaimed beach bums Alicia and Pete Brown and their two children swapped surfboards for cross-country skis when they moved from Australia to Big Bear two years ago. “It’s a great way to get outside and be active,” says Alicia.

The Browns live near the slopes but prefer cross-country skiing to downhill. Family time for them means packing a picnic and exploring the snowy forest on skis for a couple of hours before heading home to a warm fire and hot chocolate. Jade, 11, and Jhett, 8, especially love cross-country skiing. “On skis, they get to glide. We have a lot of forest trails near us,” Alicia says.

Not into skis? Snowshoeing could be the sport for you, offering the same chance to explore without the sliding. Snowshoes let you walk on top of the snow instead of sinking up to your knees. I enjoy getting away from the crowds and finding a quiet place to walk with our dog through a woodsy winter wonderland.

The first time my family went snowshoeing was in Sequoia and Kings Canyon national parks. Our firstborn was just 6 months old and took in the scenery from her baby carrier on my husband’s back. We explored on our own, but snowshoe walks are usually offered on Saturdays and holidays at Wuksachi Lodge and Grant Grove. Big Bear Lake has snowshoe rentals and plenty of areas to explore on your own or on guided eco tours at the Big Bear Discovery Center.

What? You still want your palm trees? Take the advice of L.A. mom Vivien Santana Hughes and give L.A.’s seasonal outdoor ice skating rinks a try. “There’s something magical about ice skating outside at Pershing Square under L.A.’s iconic palm trees, downtown skyscrapers and sunny skies,” says Hughes, adding that outdoor skating is a winter break tradition for her and her 12-year-old daughter, Nikki. “This year, we’ll check out ICE at Santa Monica. One day, Rockefeller Center!” says Hughes.

Another cool place to skate is at L.A. Kings Holiday Ice at L.A. Live. While indoor ice skating is available year-round in L.A., outdoor rinks are seasonal – generally open from November to January. 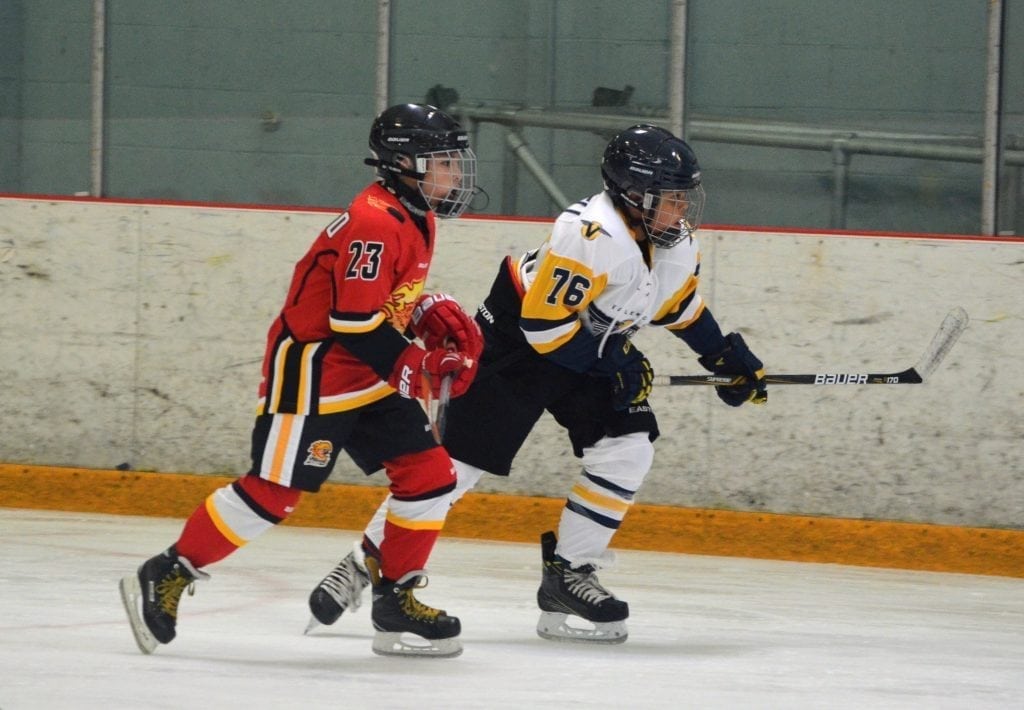 Kids can put their skating skills to use on an ice hockey team, picking up life lessons along the way. “The commitment, trust and respect it takes creates a foundation for a happy, healthy life,” says Dave Serianne, co-owner of the Los Angeles Kings Valley Ice Center in Panorama City. “We have several options for the beginner or advanced youth player.”

The Kids First program features basic skating, passing, stick handling and shooting exercises that must be introduced to new skaters away from game competition. After about a month, kids progress to the In-House program, which features three youth leagues. “Our branding contract with the L.A. Kings professional team allows us to include game-night tickets for youth and adult players who are registered in our hockey program,” says Serianne.

Sebastian Santiago, 9, learned to ice skate at age 2 and joined the Kids First program about three years later. He began competing a few months ago. His dad, Michael, says hockey has benefited Sebastian on and off the ice. “My son is shy and can be reserved. But through hockey, he’s really open and courageous,” Michael says, adding the two get on the ice together every week. “At the center, there’s stick time for hockey players to go out and practice and shoot. I go out with him and hit the puck.”

If stillness, not skating, is your winter sports goal, it doesn’t get much more chill than ice fishing. Ice fishing in California? You bet! Except that out here in the west we don’t need huts or tents. “Normally, we’re out in the sunshine on a lawn chair,” says Victor Babbitt, owner/outfitter at Tahoe Fly Fishing Outfitters in South Lake Tahoe. 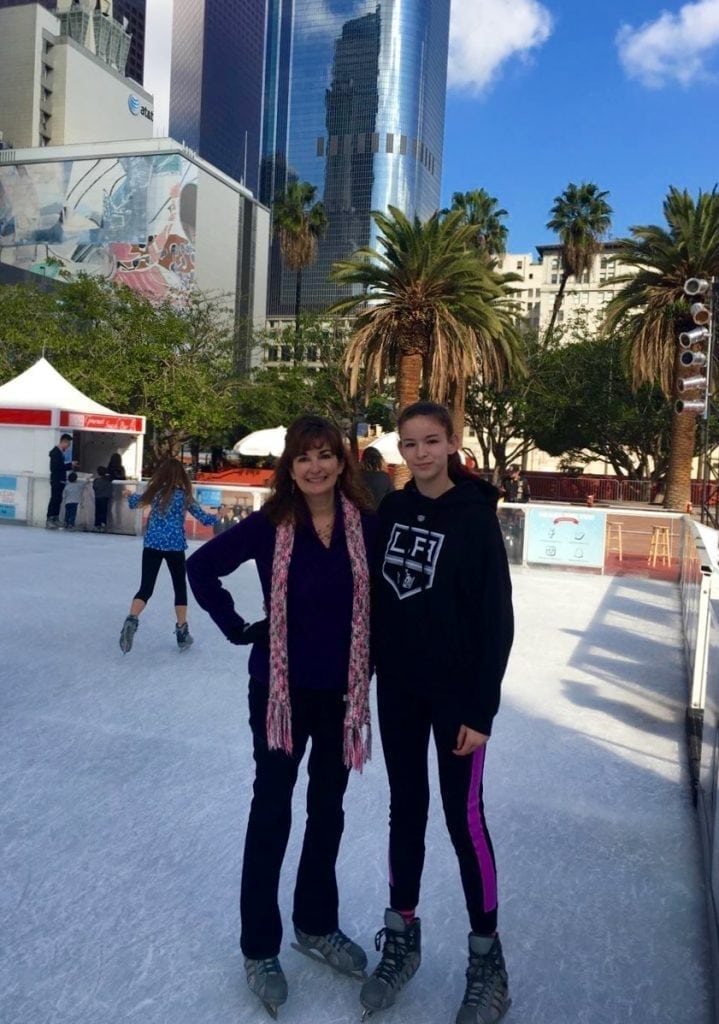 Vivien Santana Hughes and her daughter, Nikki, make skating outdoors at rinks such as the Holiday Ice Rink at Pershing Square a winter break tradition. PHOTO BY CYNTHIA RIMMER

Ice fishing is the easiest type of fishing, according to Babbitt. The season in California is short, generally from mid-December through late February. Babbitt’s company provides all necessary gear on guided tours, which last about four to five hours including drive time. You’re on the ice for about three hours at Red Lake, Caples Lake or Silver Lake in the Carson Pass. Babbitt, or another guide, scouts out the best place to drill a hole in the frozen lake. Then you drop your line and fish for various types of trout, typically about 10-14 inches long.

“It’s a fun family experience. Sometimes the kids don’t last as long, but they play in the snow,” says Babbitt. The family-friendly guided outings include a barbecue with burgers, soup and beans.

Whether your idea of fun is downhill or cross country, gliding across the ice, biking or hiking through the snowy mountains or chilling out with a fishing pole, enjoy the fact that winter is coming. And know that the season – especially here in Southern California – will give you plenty of excuses to go outside.

Mimi Slawoff is an avid skier and mom of three who is a frequent contributor to L.A. Parent. Follow her on Twitter @Mimitravelz or Instagram @Mimitravels.